Philippines ‘in the middle of garbage crisis’ – environment chief 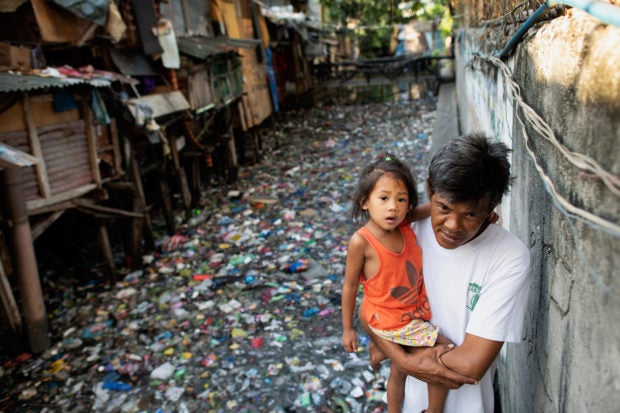 A man carries a girl along a canal polluted with plastic and garbage at the Estero de San Lazaro in Manila on March 22, 2019. On Thursday, December 5, 2019, the Philippine environment chief declares that the Philippines “is in the middles of a garbage crisis.” AFP File/Noel Celis

MANILA, Philippines — “We are now in the middle of a garbage crisis.”

Environment chief Roy Cimatu declared this Thursday as he lamented the failed solid waste management in the country.

In an ambush interview, Cimatu said proliferation of garbage has returned in Boracay Island despite government’s effort to clean up the top tourist destination.

“We have started cleanup this January, and yet after we did that, we left behind a clean shoreline, after one day, andyan na naman [‘yung basura] (the trash has come back),” Cimatu told reporters on the sidelines of Stratbase forum on environment awareness in Taguig City.

(This means that the garbage problem isn’t being solved by just cleaning that area. So, what we need is clean it from the source.)

“[Their] report on what is happening there, it is a culture of behavior problem. Despite our warning to them [public]… andyan na naman [ang basura] (trash is still there),” he pointed out.

“I would like to emphasize that political will by itself will not be enough. Without the help and support of all stakeholders in this endeavor, this battle will not be won,” he also said.

DENR has fielded 1,142 “estero rangers” in 700 barangays in Metro Manila to clean creeks that are polluting Manila Bay, according to Cimatu.

“They are tasked to clean the esteros and tributaries draining to Manila Bay and to prevent indiscriminate dumping of garbage in their respective esteros,” Cimatu said.

Also, “estero rangers” are tasked to bring “cultural and behavioral changes” on solid waste management in communities in the National Capital Region, he added.

According to Cimatu, Metro Manila has so far generated over 60,000 cubic meters of solid wastes this year surpassing the target waste generation of 58,112.31 cubic meters.

Read Next
Japanese man, 71, arrested for ‘making 24,000 complaint calls’
EDITORS' PICK
PH preps for China virus: Question of when, not if
Beyond water service: Maynilad builds massive infrastructure projects to clean up Metro Manila waterways
Museums ‘put to sleep,’ churches closed amid volcano’s unrest
Seventh judge assigned to handle De Lima case
SM continues to send relief assistance to remote towns in Batangas
Get exciting deals and discounts when you download the new McDonald’s App
MOST READ
Taal Volcano flexes signs of restiveness anew
Part of Aurora Boulevard in Cubao closed from Jan. 25 – Feb. 1
Passengers from Wuhan, China to be flown out of Kalibo, Aklan – CAAP
Lacson on Duterte’s threat to end VFA over Bato’s canceled visa: Where is the connection?
Don't miss out on the latest news and information.