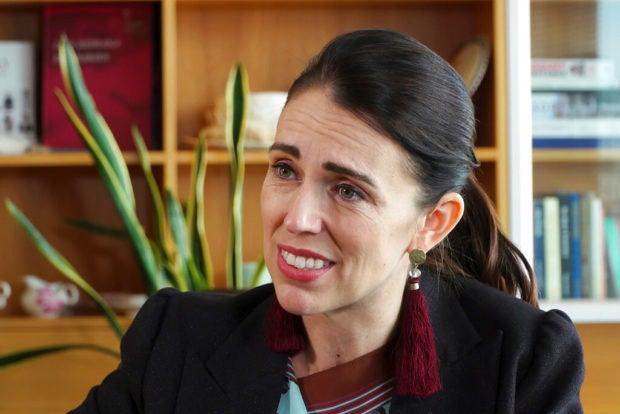 In this image made from video, New Zealand’s Prime Minister Jacinda Ardern speaks during an interview in Wellington, New Zealand, Thursday, Dec. 5, 2019. Ardern said she’ll do all she can to stop a man accused of killing 51 Muslim worshippers from spreading his message of hate at his trial. She also hopes artificial intelligence will one day stop such attacks from being broadcast online. (AP Photo/Sam James)

WELLINGTON, New Zealand — New Zealand’s prime minister said she will do all she can to stop a man accused of killing 51 Muslim worshippers from spreading his message of hate at his trial, while she hopes artificial intelligence will one day stop such attacks from being broadcast online.

In an interview with The Associated Press on Thursday, Prime Minister Jacinda Ardern described how she made decisions after the March 15 attacks at two Christchurch mosques, including introducing sweeping gun reforms and starting a global discussion on keeping violent extremism from the internet.

Australian white supremacist Brenton Tarrant, 29, has been charged with 51 counts of murder, 40 counts of attempted murder and one count of terrorism in the attacks and goes on trial next June.

Ardern said she thought he would try to use the trial to promote his views.

“It’s clear that a part of this individual’s motivation is creating a platform for himself. I think that’s absolutely clear,” she said. “And I think every opportunity we can to deprive the alleged terrorist of that should be utilized.”

She said she was limited in what she could do but was encouraged by the pledge of New Zealand’s major media outlets to avoid promoting white supremacist ideology when covering the trial.

Ardern said she stood by her decision to never speak the alleged gunman’s name.

“If someone’s motivated by infamy, then you deprive them of it,” she said.

The gunman livestreamed his attack on Facebook. Ardern said she hoped artificial intelligence could be used to stop future attacks from being broadcast, and that everybody had a responsibility to prevent such broadcasts from continuing to happen.

“Even Facebook have made moves around the way that they utilize livestreaming and who can access it,” she said. “In the future, I believe we can actually use AI technology increasingly.”

Ardern said she was traveling in a van on the outskirts of the North Island town of New Plymouth when she first heard about the attacks.

“The scale of it and the magnitude of it took some time to come to grips with,” she said.

Farid Ahmed, whose wife Husna was killed in the attack on the Al Noor mosque, said New Zealanders were initially confused about what to think. But a week later at Muslim prayers in Christchurch, Ardern gave a nationally televised speech that Ahmed said united people with three simple words: “We are one.”

“It was so beautiful, in just one sentence,” Ahmed said.

Ardern said she still had the piece of paper where she’d hurriedly written her sentiments after the attack, words that would later resonate around the world.

“To me, it should have been the most unextraordinary thing to say. It was just my instinct around the way New Zealanders would be feeling,” she said. “Yes, this was an attack, very explicitly on our Muslim community. But they were our Muslim community. I just felt that needed to be said straight away.”

Ardern said nobody at the time was really analyzing what they were doing or saying, they were just responding, often with great compassion. She said everybody felt emotional at the time but she couldn’t let that get in the way of doing her job.

“I did the best I could at making sure that I didn’t let anyone down. I needed to keep going and keep focused and keep working on behalf of those families,” she said. “But yeah, of course, undeniably it had an impact on me.”

Ardern vowed to change New Zealand’s gun laws after the attacks, and less than a month later all but one of the country’s 120 lawmakers voted in favor of banning assault weapons.

“In my view, we are just total pragmatists,” Ardern said. “So when we saw the scale, and magnitude, and impact of these types of weapons utilized in this way, even those who legitimately hold weapons, said ‘Actually, we don’t need those. Those don’t need to stay.'”

A gun buyback scheme that ends later this month has seen 37,000 newly banned weapons turned over to police, although some estimates indicate there could be many thousands of banned guns that haven’t been turned in. Ardern said she felt the buyback had been a success.

“Those are tens of thousands of guns that are no longer in circulation,” she said. “And that is a good thing.”

In a speech after the attacks, Ahmed told a crowd of about 20,000 people in Christchurch that he forgave the man who killed his wife. He said he didn’t want to have a heart burning with anger and hatred.

Ardern said Ahmed was an extraordinary man. Asked if she could ever forgive the gunman, Ardern turned the focus back on those who were at the mosques.

“No one is more central to what happened on the 15th of March than those who were directly affected,” Ardern said. “So it’s not for me to give.”