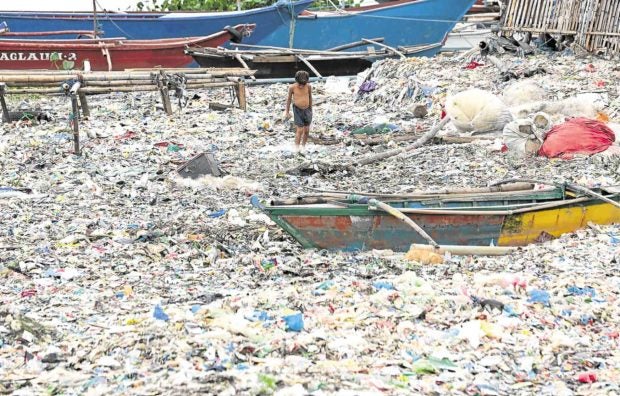 TRASHY SHORES In this undated photo, plastic wastes are seen covering a portion of the coastline in Tondo, Manila. INQUIRER FILE/GRIG C. MONTEGRANDE

MANILA, Philippines — The Department of Environment and Natural Resources (DENR) is poised to issue an order banning single-use plastics nationwide.

Environment Secretary Roy Cimatu said this Thursday on the sidelines of a Stratbase forum in Taguig City.

“We [DENR] are about to complete department order on [banning] use of plastic. I think within the next two weeks siguro [probably],” Cimatu told reporters.

Cimatu added that the department order they are crafting will also tackle the recycling of plastics.

The Environment chief cited that the Philippines ranked as the third-highest source of ocean plastic pollution with an “estimated 2.7 million metric tons of plastic waste.”

Because of this, there is a need for the country to enhance its solid waste management policies, Cimatu said.

Quoting a 2019 report from the Department of the Interior and Local Government, Cimatu said that 140 in 178 local government units in Metro Manila, Region III, and Region IV-A have an approved solid waste management plan.

President Rodrigo Duterte previously suggested banning the use of plastics in the country amid issues on climate change.