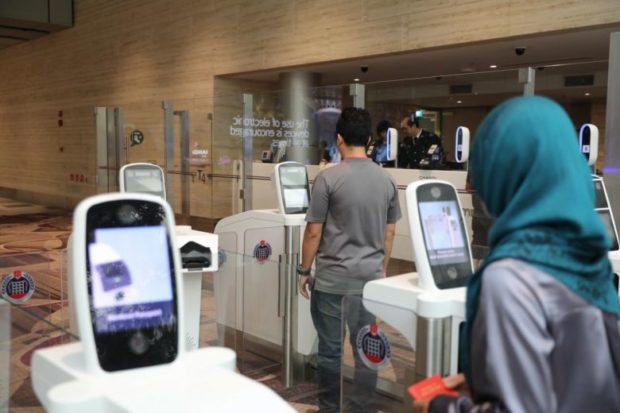 SINGAPORE — Some returning Singaporeans at Changi Airport Terminal 4 no longer need to produce their passports to clear immigration in a six-month trial that uses iris and facial recognition for identity verification.

Similar to the recently concluded trial at Tuas Checkpoint, travelers simply need to look at a scanner which will employ iris and facial recognition to verify their identity.

The contactless immigration clearance is faster than the current passport-and-thumbprint system. Some travelers experience problems with fingerprint verification because ageing, dryness or scarring can make their fingerprints hard to read.

The trial began on Nov 25 and is open only to Singapore citizens aged six and above holding passport numbers beginning with the letter “K”, and whose passports were issued after Jan 1, 2018.

The Immigration and Checkpoints Authority (ICA), which is running the trial, said travelers using the contactless immigration clearance lane should remove sunglasses, caps or other headgear that could obstruct their eyes or face when passing through the lanes.

At T4, ICA will dedicate one lane each to test two methods of clearance.
The first method allows a second traveller in the queue to start the screening process before the traveller ahead of him has completed the process.

The second method requires the first traveller to complete the process before a second traveler is screened.

Both systems will be compared for feasibility, efficiency and accuracy.

The first system works like this: After successfully having his iris and face scanned, the first traveller in the queue walks through one set of gates or “flappers” in the lane.

After passing through, the first set of flappers closes and “on-the-move” facial recognition will confirm the traveller’s identity a second time before he or she reaches a second set of flappers.

The flappers will open without needing the traveller to stop.

This system allows a second traveller to start the iris and facial scanning process as the first traveler is approaching the second set of flappers.

The second system, which will come online at T4 in early 2020, is the same as the one used in the recently concluded Tuas Checkpoint trial. It does away with scanning at the first set of flappers.

On successful verification, the second set of flappers opens to let the traveler through, and the process is then started for the traveller behind.

More than 22,500 Singaporean travelers were processed in the Tuas Checkpoint trial, ICA said, with 90 per cent clearing immigration smoothly. The remaining 10 per cent had difficulties stemming from unfamiliarity with the scanning process.

For the T4 trial, ICA has incorporated a dynamic graphical user interface (GUI) – developed with the Home Team Science and Technology Agency (HTX) – to make the overall experience more intuitive and easily understood for travelers.

The media was invited to T4 see the new contactless systems in action on Nov 28.

Travelers who used the two contactless systems cleared the immigration process faster than those in the passport-and-thumbprint lanes.

Ms Margaret Lau, who was returning from a trip, said she preferred using facial recognition, as her dry fingers sometimes caused problems with the older system.

While she did not like taking off her glasses for the scan, the 63-year-old said she found the process quicker than the passport-and-thumbprint system.

The trial is aimed at improving handling of the growing volume of travellers passing through Singapore’s checkpoints.

At Singapore’s two land checkpoints in Tuas and Woodlands, more than 400,000 travelers pass through them a day, with about 280,000 using the Woodlands Checkpoint.

ICA said the automated border control system (ABCS), involving next-generation automated lanes like the ones in the Tuas and T4 trials, will gradually be opened to foreign visitors too, eventually supplanting the current paper-based system.

Separately, the authority said that to cope with rising demand for registration and identification services, a new Integrated Services Centre will be built next to the existing ICA building at Kallang Road.