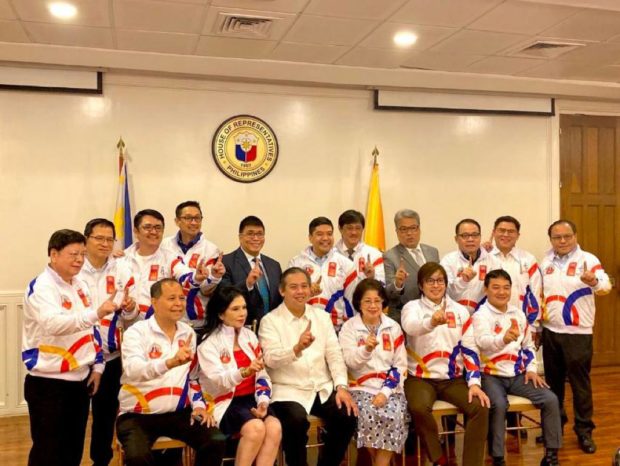 House Leaders hoist the “Win as One” sign as they vow to raise P10 million for Filipino athletes who will bring home the gold in the 30th Southeast Asian Games. CONTRIBUTED PHOTO

MANILA, Philippines — The House of Representatives will raise at least P10 million from members’ salaries for additional perks of Filipino gold medalists in the ongoing 30th Southeast Asian Games which is being hosted by the Philippines.

The office of Speaker Alan Peter Cayetano on Thursday said that through House Resolution No. 568, lawmakers will share  a portion of their salaries for January 2020 as a way to hail Filipino athletes and grant them additional incentives.

A total of 1,094 Filipino athletes, backed by 753 coaches, are competing in the biennial Games.

“As a concrete manifestation of the commonality of the goal to bring honor and pride to the country, the leaders and members of the House of Representatives deem it proper to deduct individual pledges from their salaries for January 2020 as additional incentives to Filipino gold medal winners in the 30th SEA Games,” the resolution stated.

Under the resolution, House members agreed that it is “fitting” to grant the athletes additional incentives as they bring great honor and pride to the Filipino people by winning gold medals in their respective sports.

The additional incentives from the House will be on top of what the winning athletes  are entitled to under the law, and the cash prizes given to them by the Philippine Olympic Committee (POC).

“The leaders and members of the House of Representatives in the 18th Congress stood in solidarity with Team Philippines throughout the competition in their quest to capture the gold medals in their respective sports, and bring honor and pride to the Filipino people,” the resolution said.

The 30th SEA Games officially opened last Nov. 30 at the Philippine Arena in Bulacan and will end on Dec. 11 at the New Clark City in Tarlac. I

Athletes from 11 nations will compete in 530 events and 56 sports disciplines.