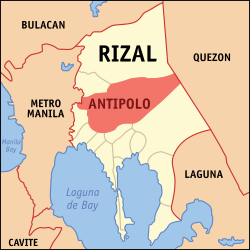 Report from Police Regional Office 4 identified one of the slain rebels as “Ka Bisaya,” alleged NPA Platoon leader in the region. The other rebel is still unidentified.

Lazarte and his two other companions reportedly opened fire, prompting the government forces to retaliate.

Ternio said the government forces applied first aid treatment to the wounded rebels. But they died while being taken to Amang Rodriguez Hospital in Marikina City.

No member of the government forces was hurt in the shootout.

Report said the presence of Lazarte and companions in the area was tipped off by “informants” from inside the rebel movement.

Diaz said the death of Lazarte “is a decisive blow to the communist terrorists for it will result to leadership vacuum”.

The military said Lazarte was the second high-ranking communist rebel leader from Southern Tagalog who had been neutralized in nine days following the arrest of Jaime “Ka Diego” Padilla at the Cardinal Santos Medical Center in San Juan City, where the NPA leader was supposedly confined due to hypertension.

Padilla was the NPA spokesman in the Southern Tagalog region.