PARIS  – French trains rolled to a halt Wednesday evening, kicking off massive nationwide strikes and protests against President Emmanuel Macron’s plans to overhaul the retirement system, seen as an untouchable symbol of the French way of life. 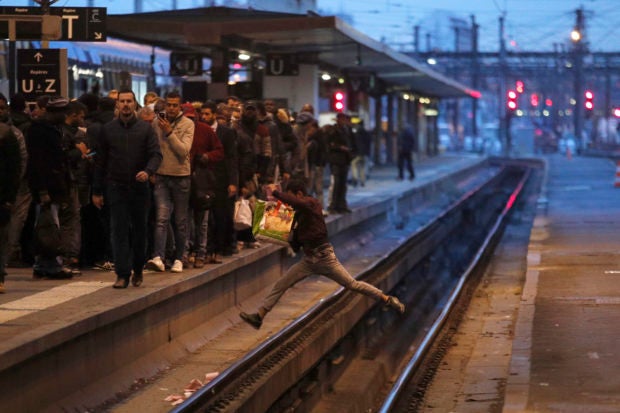 FILE – In this Tuesday, April 3, 2018 file photo a passenger crosses railroad tracks at rush hour at Gare de Lyon train station, in Paris. France’s rail operator SNCF and the Paris Metro say nationwide strikes will wipe out most services Thursday, impacting millions. The SNCF expects that 9 out of 10 high-speed trains won’t run and that half of the Eurostar services linking France and Britain will be canceled, too. (AP Photo/Francois Mori, File)

Tourists canceled travel plans and Paris deployed thousands of police to cope with what was expected to be a challenging day Thursday.

The walkout was expected to hit transportation the hardest, as flights, trains and buses canceled service and most of the Paris subway system came to a halt. Workers at the national railway SNCF stopped work Wednesday evening, while other services planned to shut down Thursday morning for an indefinite period.

In Paris, where workers’ unions were planning a big march Thursday, police warned of possible violence and damages and ordered all businesses, cafes and restaurants along the protest route to close. Authorities also issued a ban on protests on the Champs-Elysees avenue, around the presidential palace, parliament and Notre Dame Cathedral.

Paris police chief Didier Lallement said that 6,000 police officers would fan out around the city, notably amid fears that protest groups and extremist troublemakers could join the action.

The Eiffel Tower warned tourists to delay a visit to the iconic monument because the strike would disrupt access on Thursday.

The Louvre Museum said its opening Thursday could be delayed, and some viewing rooms may be closed.

Hotels across Paris reported receiving numerous cancellations ahead of the strike, as wary tourists eyed closing transportation routes and decided to skip their Paris vacations.

The SNCF railway expected nine out of 10 high-speed trains to be canceled. International train lines were expected to be affected, too. No tickets were available on Eurostar trains across the English Channel until Tuesday.

Air France said about 30% of its domestic flights would be canceled.

The government said 55% of teachers would be on strike Thursday, and hospitals also would be affected.

Workers are angry at Macron’s plan to streamline the country’s 42 state pension systems, fearing they will have to work longer and earn less upon retirement.

For Amina Hamade, 17, who lives in the Paris suburb of Poissy and takes the train to her high school in the nearby town of Les Mureaux, the strike provides a good excuse to skip school Thursday and Friday.

Tarik Slimani, a butcher in Les Mureaux, sees the strike as a political stunt that will hurt the economy. Everyone who relies on public transportation to get to work will pay the price, he said.

At Montparnasse train station, Samira Quasan, a 28-year-old tourist from Chicago, described moving around her travel plans to and from Bordeaux because of the strike. Parisian Marie Boudal had to do the same for her grandchild’s baptism in Lyon.

Some travelers complained about the disruptions, while some showed support for the striking workers.

“They really are attacking something that was one of the few remaining things that we had” — the pension system, said Sylviane Charles, a 57-year-old school principal whose school was slated to close Thursday. “And so you end up with widespread despair.”