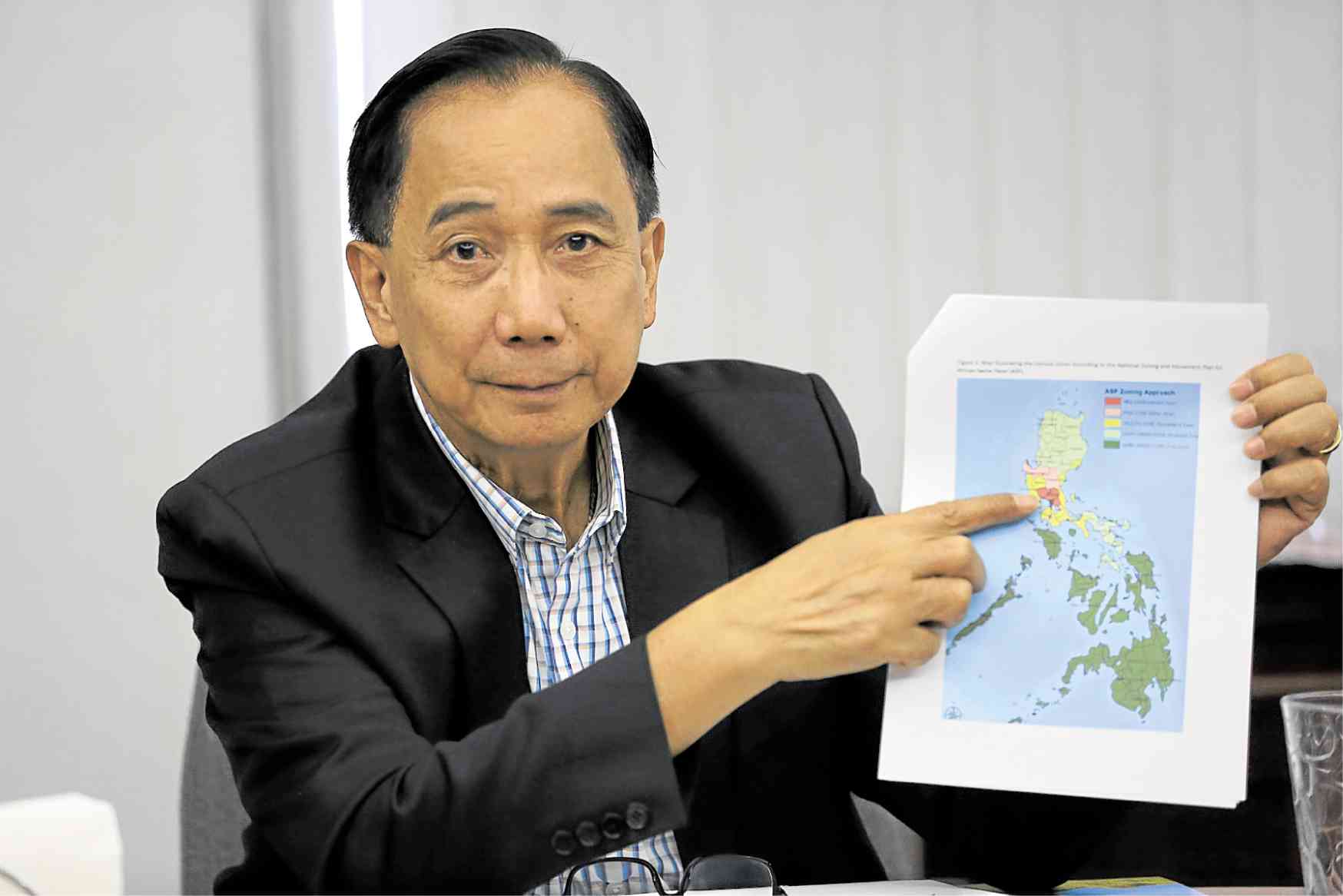 PORK ZONES Agriculture Secretary William Dar says the Department of Agriculture has drawn a map to guide local governments on where pork products can or cannot be traded to prevent the spread of African swine fever. —JOAN BONDOC

MANILA, Philippines — The Department of Agriculture (DA) will soon implement a zoning plan to regulate the movement of pork and pork products around the country after various local governments issued independent orders to protect their own hog industries against African swine fever (ASF).

Following the outbreak of the hog disease in Luzon, 64 municipal, city and provincial governments—mostly in the Visayas and Mindanao—have imposed a ban on the entry of pork and pork products from ASF-infected areas to keep their localities free of the virus, which is deadly to pigs but safe for humans.

The local governments imposed the ban despite a circular from the Department of the Interior and Local Government last month encouraging them to rescind the ban so as not to curtail pork trade.

In a meeting with Inquirer reporters and editors on Wednesday, Agriculture Secretary William Dar presented a Philippine map showing compartmentalized “zones” designated by the DA. The various regions were grouped into five zones that were color-coded to indicate the level of ASF contamination.

Dar said the local governments were mandated to follow the zoning map, which would be implemented before the end of the year and monitored by the government’s ASF national task force.

Regions would be broadly classified into two, namely the “free zone” and the “contaminated zone.”

Provinces under a free zone have no reported cases of ASF, such as those in the Visayas and Mindanao, as well as the island provinces of Catanduanes and Masbate and in Mimaropa. Those within the zone can freely trade their hogs and pork products anywhere in the country so long as they follow standard shipment protocols.

Provinces with confirmed cases of ASF and with reports of the disease still spreading in their cities or municipalities, such as Bulacan and Pampanga, will be included in the infected zone. Areas within the zone could only trade live pigs, pork and pork products with other infected areas.

The DA, however, said that there would be products like canned and fully cooked pork that these areas could trade with the free zone. The agency has yet to provide a list.

Regions with the highest swine population, both raised in commercial and backyard operations, will be under the surveillance zone. They would include Central Luzon and Calabarzon.

The provinces in these regions account for more than 25 percent of the country’s swine population. As such, the national task force on ASF would closely monitor their swine and pork trade.

Dar said hog raisers and others involved in the industry were consulted in the preparation of the plan. He pointed out that the plan was also laid out to the Cabinet and received no opposition.

The agriculture secretary noted that the spread of the hog disease had “tapered down” over the past weeks with no new cases since Pangasinan reported an outbreak on Oct. 23.

As of end-November, there were seven provinces and cities with confirmed cases of ASF, affecting 497 barangays.

To stop the spread of the disease, authorities culled 136,770 pigs even though only 18 percent of them had tested positive for ASF.

The culling was in accordance with the government’s so-called 1-7-10 ASF control protocol, in which all pigs within one kilometer of an infected site, or ground zero, must be put down. Those within 7 kilometers from ground zero would be placed under surveillance and limited pork trading in some cases would be allowed.

Hogs and pork products within a 10-km radius from the infected site would be monitored for the presence of the ASF virus.

Dar assured consumers of sufficient supply of pork and pork products, especially during this Christmas season, noting that only less than 1 percent of the country’s entire hog population had been culled.

Read Next
Manila Water open to ‘workable solution’ on P7.4-B award
EDITORS' PICK
This new condo in the South will make you want to turn a new leaf
Legarda: Ending Violence Against Women, a cause for all
Sara Duterte calls for supporters’ unity after Go’s withdrawal from presidential race
CHR hopes inequalities exposed by COVID-19 pandemic are addressed
BOQ monitoring 64 travelers from ‘red-list’ countries amid Omicron
Smart offers wireless fiber-like speeds to Filipino homes with country’s first 5G Prepaid Home WiFi
MOST READ
DOH: Booster doses for fully vaxxed adults to start December 3
Another disqualification petition filed against Bongbong Marcos
Ex-DOT chief Ace Durano convicted of graft over 2009 project
Roque defends Bongbong Marcos: ‘He was only 15 years old in 1972’
Don't miss out on the latest news and information.