Nepal: Tourists are flocking in but hardly spending money 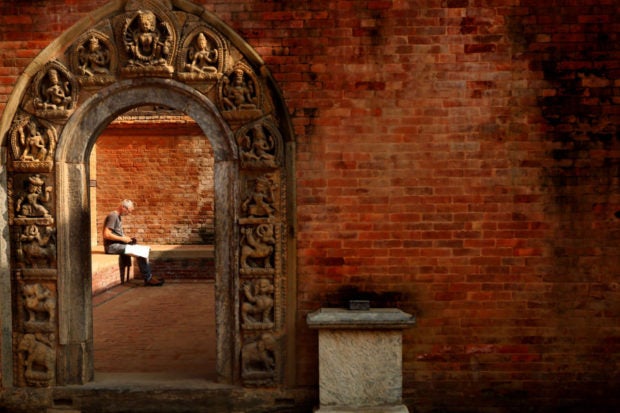 A tourist browses a map of Nepal at Patan Museum in Lalitpur. Elite Joshi/TKP

KATHMANDU — It’s a balmy Friday afternoon, but Kabindra Shrestha, a cashier at North Face Money Exchange in Thamel is glum. Five hours into the opening, he says he’s been able to exchange foreign currency worth only $1,360.

“The business is down by almost 50 percent since last year,” said Shrestha.

Shrestha’s experience has two possible causes—either tourist arrivals are down or a majority are not carrying enough cash. Since data shows a steady rise in the number of tourists visiting the country, travel and tourism operators say a major concern for them is whether tourists are spending enough.

According to the Nepal Tourism Board, a total of 975,557 visitors arrived in Nepal in the first 10 months of this year. Tourist arrivals crossed the coveted one-million mark for the first time in 2018, with 1.17 million foreign visitors streaming into the country. With the government’s flagship Visit Nepal 2020 just around the corner, Nepal is aiming to bring in two million tourists. But tourism experts say numbers won’t matter unless visitors loosen their purse strings.

The longer the tourists stay, the more they will spend, but the government has failed to take appropriate measures to increase their vacation lengths and create avenues for them to spend money, say entrepreneurs.

According to Ashok Pokharel, president of the Nepal Association of Tour Operators, vacation lengths of visitors are getting shorter and Nepal hasn’t been able to learn from global tourist destinations like Dubai and Singapore, both of which have created spending avenues like duty-free shopping, theme parks, a thriving nightlife and discounted high-end shopping festivals for foreign travellers.

On the contrary, Tribhuvan International Airport, the country’s sole international airport, doesn’t even have a duty-free shop.

“Home-bound tourists tend to splurge their leftover cash on liquor, perfumes, chocolates, gadgets and toys at duty-free outlets,” said Pokharel. “But this option is simply not available for them in Nepal. So they take back much of the foreign currency they had brought to spend.”

Though the government is targeting a daily average tourist spending of $75 per day next year to increase the share of the tourism industry in the country’s gross domestic product (GDP), it has largely failed to create spending avenues.

Tourist spending is the largest earner of foreign currency for Nepal with the tourism sector contributing 2.2 percent to the GDP in the fiscal year 2017-18.

A lack of places for tourists to spend money, coupled with changes in their spending patterns, could make meeting Visit Nepal 2020’s target of Rs200 billion in tourist earnings difficult.

The Finance Ministry has allocated Rs600 million to carry out promotional activities in key source markets to Visit Nepal Secretariat. As the budget was only approved a month before the start of the campaign, travel trade entrepreneurs doubt that the money will get fully spent on international promotions. Separately, Nepal Tourism Board, the country’s tourism promotion body, has earmarked a Rs1 billion budget to promote Nepal.

“We are less than 30 days away from the start of the event and it is not yet clear how this budget is going to be spent. The budget amount has to be spent by June 15, or else it will lapse,” said Pokharel. Nepal had announced the event in 2018, but was behind in allocating funds.

Officials from the Tourism Board, however, said that they were doing enough with the funds they had.

“We have done promotions in Europe, India, China and the US and the response has been quite encouraging,” said Deepak Raj Joshi, chief executive officer of Nepal Tourism Board.

Nepal’s promotional campaigns, however, are largely focussed on showcasing mountains, trekking routes and religious sites, a tendency many experts describe as too traditional. Not all the tourists go on a trek nor does everyone want to climb mountains.

In order to not just bring in more tourists but also get them to spend more, Nepal needs to create more avenues for visitors to spend their money, said Abdullah Kececi, general manager for Turkish Airlines in Nepal. Turkish is the only European airline that conducts direct flights to Kathmandu.

“Nepal needs to invest more in building solid, sustainable infrastructure to improve connectivity among its cities, so that tourism revenues can spread beyond Kathmandu and Pokhara,” said Kececi.

Joshi agrees that lack of quality infrastructure is one of the biggest concerns, as this may lead to a large number of leisure tourists exploring travel options other than Nepal.

“The poor quality of most roads in the country and heavy, slow-moving vehicular traffic, which are time killers for many tourists who come for a stay here for a limited time and on a budget,” said Joshi.

According to Joshi, Nepal hopes to surpass Rs150 billion in revenue by reaching the target of two million tourists next year. But going by occupancy rates at Kathmandu’s high-end hotels, this too appears unlikely. The first-quarter financial reports from Taragaon Regency Hotels, Soaltee Hotel and Oriental Hotels showed that profits nosedived from numbers made last fiscal year. The three hotel groups, which cater to high-end tourists, said that price undercutting, a demand-and-supply gap and a growing number of backpackers are behind the sharp fall in their earnings.

But even former officials believe that the government’s revenue target for next year is too optimistic, given the current state of the country’s infrastructure.

“The target will, however, certainly prepare the ground for future tourist arrivals as the right kind of momentum would get built,” said Krishna Bahadur Manandhar, a former deputy governor of the central bank.

With the kick-off of Visit Nepal 2020 less than a month away, there is not much the government and other concerned agencies can do in terms of infrastructure and spending avenues.

But Kececi of Turkish Airlines has a tip to share.

“It is widely believed in the travel industry that five-day tourists are high spenders,” said Kececi. “Nepal should target this class and provide easy connectivity to travellers interested in visiting Chitwan, Lumbini and Pokhara. In time, that will certainly lead to an upsurge in tourism revenues.”