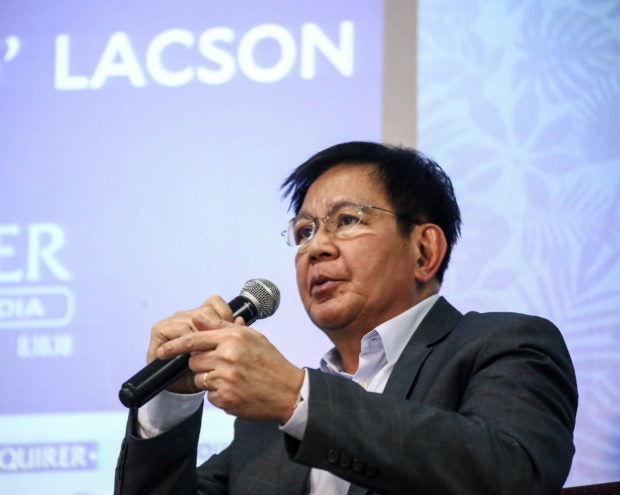 MANILA, Philippines — Senator Panfilo Lacson has proposed up to P20 billion cut from the budget of the Department of Public Works and Highways and sought to realign funding intended for the construction of basic education facilities.

In his institutional amendments on the proposed P4.1-trillion national budget, which was released to the media on Wednesday, Lacson proposed a P20.129-billion cut for the DPWH’s budget, with the following breakdown:

Lacson reasoned that the DPWH has unused appropriations amounting to P82.4 billion from 2011 to 2018. He also noted that the agency’s obligation rate was 92.1 percent but the disbursement rate was only 36.3 percent.

The senator also proposed that P14 billion be deducted from the budget intended for the construction, replacement, and completion of school buildings for kindergarten, elementary and secondary students. This will reduce the budget from P19 billion to only P5 billion.

He explained that while education remains a top priority for the government, the Department of Education (DepEd) has failed to properly disburse funds and implement the Basic Education Facilities Program, resulting in what he called “backlogs.”

“To set aside a substantial budget for the Basic Education Facilities Program without first resolving the backlogs, and the problems in the implementation is an inefficient allocation of resources,” Lacson said.

He offered that the P14 billion be allocated to the quick response fund and DepEd’s Last Miles School program.

While he slashed the budget for the Basic Education Facilities Program, Lacson proposed additional funding for the following programs under the education sector:

-Add P2 billion to the Quick Response Fund from P2 billion to P4 billion. The additional P2 billion will come from the budget of the Basic Education Facilities program.

-Add P12 billion for the Last Mile Schools Program, from P1.5 billion to P14.5 billion. The 12 billion will come from the funds from the Basic Education program.

-Additional P537.991 billion for the University of the Philippines-Los Baños’ National Institute of Molecular Biology and Biotechnology.

Under the senator’s proposed amendments, the Department of Transportation (DOTr) will also have a P5-billion deduction, particularly on its ROW acquisitions. Lacson reasoned that this is due to the “significantly low” obligation rate, with inefficient management of ROW payments resulting in a backlog of flagship programs.

About P300 million will also be deducted from the Health Promotion program of the Department of Health (DOH) because of low obligation and disbursement rate. Lacson noted that only 51.35 percent of the P292.2 million allocated for health promotion in 2019 was obligated and out of the obligation, only 24. 38 percent was disbursed.

The senator also proposed that P2 billion be deducted from the National Greening Program, from P5.152 billion to P3.152 billion.

For the health sector, Lacson offered the following budget increases:

The Senate and the House have convened the bicameral conference committee on the proposed 2020 national budget, where they will resolve disagreeing provisions of the General Appropriations Bill (GAB).

Both chambers of Congress are hoping to ratify the proposed P4.1 trillion 2020 national budget by Monday, Dec. 9.