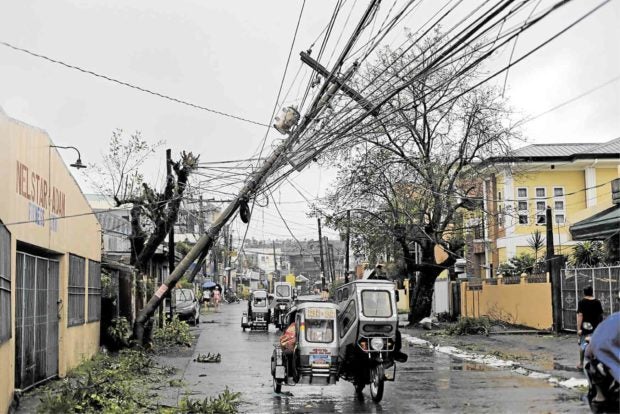 POWERFUL WINDS This electric post in Daraga town in Albay province proved no match for the powerful winds generated by Typhoon “Tisoy” as the storm blew across the Bicol region on Monday night. Tisoy left swaths of the region without electricity on Tuesday. —GEORGE GIO BRONDIAL

Bicol and Eastern Visayas took the brunt of a powerful typhoon that barreled into the country on Monday night, killing a construction worker and sending tens of thousands of people into evacuation centers, damaging homes and infrastructure, and disrupting plans for Southeast Asian Games events in and near Manila.

Local governments evacuated some 225,000 people in the two regions and in Calabarzon, Mimaropa and flood-prone parts of Metro Manila ahead of the arrival overnight of Typhoon “Tisoy” (international name: Kammuri), which weakened slightly after slamming into land then picked up speed as it moved across central Philippines.

Tisoy first hit land in Gubat town in Sorsogon province around 11 p.m. on Monday. It then blew westward, making landfalls on Burias Island and in Marinduque on Tuesday, according to the weather bureau.

The Philippine Atmospheric, Geophysical and Astronomical Services Administration (Pagasa) said the typhoon weakened as it repeatedly hit land but still packed winds of up to 130 kilometers per hour near the center and gusts of up to 200 kph by 4 p.m.

As of Tuesday afternoon, the storm’s center was 110 km northwest of San Jose, Occidental Mindoro province, and was moving west at 25 kph.

Pagasa said Tisoy was expected to bring heavy rain in provinces across Luzon on Wednesday and leave Philippine territory by Thursday.

As of Tuesday afternoon, Tropical Cyclone Wind Signal No. 3 was raised in Oriental Mindoro and Occidental Mindoro, including Lubang Island, and Batangas.

Local governments in provinces in the path of the typhoon called off school and work in public offices.

Tisoy, the 20th typhoon to hit the Philippines this year, halted commercial sea and air travel and shuttered schools and government offices in Metro Manila.

Authorities warned of storm surges of up to 3 meters and floods and landslides from heavy winds and rain.

Some 500 flights were canceled and 100,000 travelers impacted by a rare precautionary closure of all four terminals at Ninoy Aquino International Airport in Manila for 12 hours until 11 p.m. on Tuesday. (See related story on Page A5.)

Air travel continued in unaffected parts of the country.

In Ormoc City, Leyte province, a 38-year-old construction worker died after being hit by branches that fell from a tree due to strong winds as Tisoy roared toward land on Monday afternoon.

As of 7 p.m. on Tuesday, the regional disaster office was checking out reports of five other fatalities in Mimaropa.

Early reports said one resident of Marinduque and two from Baco and Pinamalayan towns in Oriental Mindoro were killed after being struck by falling trees.

Authorities were also verifying reports that two others, also from Pinamalayan, died of heart attack at the height of the typhoon.

Massive evacuations that began on Sunday had reduced the typhoon’s human impact so far.

“We’ve seen great improvement in local government management of preparations for disasters,” Mark Timbal, a spokesperson for the National Disaster Risk Reduction and Managerment Council, said in a television interview on Tuesday.

“The prepositioning of supplies was executed well before the arrival of the storm,” he said.

Tisoy struck as the Philippines was hosting the 30th Southeast Asian Games, forcing organizers to postpone several events until later in the competition, among them surfing, kayak, windsurfing, polo, sailing, skateboarding and canoeing. (See story on this page.)

In Bicol, worst hit was the airport in Legazpi City, Albay, where TV footage showed structural damage and cables, lighting and panels hanging from the ceiling over departure areas.

Gov. Al Francis Bichara said it was lucky that a mandatory evacuation of tens of thousands of residents had taken place before the typhoon came ashore.

“The wind was so terrible,” Bichara said. “Some of their houses were badly damaged.”

The provincial board declared a state of calamity on Tuesday with much of Bicol without power.

Power was down in Albay, Camarines Norte, Catanduanes and Masbate, and on the islands of Ticao and Burias, and in some parts of Camarines Sur.

Telecommunication was also cut in many parts of the region.

Some cities and towns in the region reported having no water.

The cost of damage to infrastructure and agriculture in Bicol was not immediately known as assessment was still going on late on Tuesday.

More than 2,000 travelers have been stranded at the ports in Sorsogon and Masbate since the Coast Guard halted sea travel late Sunday as Tisoy bore down on the region.

In Eastern Visayas, all 14,000 residents of the town of Mapanas in Northern Samar province, which faces the Pacific Ocean, fled their homes in coastal villages as Tisoy churned toward land on Monday.

“We have suffered major damage though I cannot give you exact data on this as of this time,” said Joe Louis Gajutos, the local disaster officer. “But [on Wednesday] I will convene the [disaster] council and recommend a state of calamity.”

Communication lines in the entire province of Samar was down on Tuesday.

Tourists were stranded on Boracay Island and the mainland town of Malay in Aklan as Tisoy blew across Western Visayas on Tuesday. No casualties were reported.

Flooding was reported in some parts of Calabarzon, including Pagbilao in Quezon province, and Bucal and Pansol in Laguna’s Calamba City, but authorities said they expected the floodwaters to subside fast as the weather improved in the afternoon.

Storm surges were reported in some coastal villages in Batangas and Quezon.

In Luzon, some 25,000 boy scouts participating in the 17th National Scout Jamboree in Botolan, Zambales province, sought shelter in schools as intense rain battered the area.

As the typhoon blew away on Tuesday, the Department of Public Works and Highways began clearing roads in Bicol and Calabarzon.