40,000 flee as clashes rage in Maguindanao

Number of evacuees rises and falls, depending on what happens overnight’
By: Edwin O. Fernandez - @inquirerdotnet
Philippine Daily Inquirer / 04:20 AM December 04, 2019 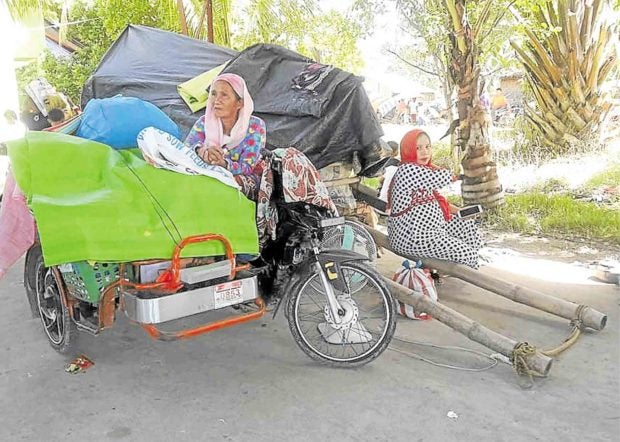 DISPLACED A grandmother and her pregnant daughter at the Shariff Aguak evacuation site wait for the go signal to return home amid the ongoing clashes between government forces and members of the Bangsamoro Islamic Freedom Fighters. —CONTRIBUTED PHOTO

SHARIFF AGUAK, Maguindanao, Philippines — Close to 40,000 residents have been displaced by the ongoing clashes between government forces and members of the Bangsamoro Islamic Freedom Fighters (BIFF) in Maguindanao province, social welfare officials said on Tuesday.

Emma Ali, Maguindanao provincial social welfare chief, said the number of internally displaced persons had reached 38,235 and was still rising in evacuation centers. Some of them had taken refuge in homes of their relatives.

“The number of evacuees rises and falls every now and then, depending on what happens overnight,” Ali said. At one point, the number rose to 48,000 since the fighting between government troops and the BIFF rebels broke out on Nov. 24.

“When there are explosions and shelling at night, people move to safer grounds,” Ali said. “That explains why people in conflict areas have their valuables ready in tricycles or carabao-drawn carts for quick movement.”

Local governments of affected towns had attended to the needs of the evacuees, she said, adding that a civilian was reported to have been hit by a stray bullet. She did not give details.

Datu Anwar Kuit Emblawa, municipal information officer of Shariff Aguak, said most of the affected families already wanted to return home but were still awaiting signal from the government to ensure their safety.

“They really want to go home because they are more productive in their communities than in temporary shelters,” Emblawa said. “Mothers are worried that their children will get sick if their stay at the evacuation camps will be prolonged.”

“Until when shall we stay here?” asked Baimona Salang, 45, a mother of four children seeking shelter at Shariff Aguak. “Our life is so hard. We hope the fighting stops because we already have BARMM (Bangsamoro Autonomous Region in Muslim Mindanao) in place.”

She said she was worried that her children would get sick at the evacuation site as she expressed regret for the days she failed to work and her loss of income.

Emblawa said all evacuees from Shariff Aguak had been served with relief goods and supply of safe drinking water.

“We have extended aid to all evacuees, even those from other towns who are here because we believe that disaster response recognizes no boundaries,” said Emblawa, also the executive secretary of Mayor Marop Ampatuan.

He said 65 families from nearby Shariff Saydona Mustapha were getting aid from the local government of Shariff Aguak.

Ali said most evacuees had fled their homes in March when government forces launched air and ground assaults against BIFF rebels.

Babo Kanakan, an evacuee, said it was her ninth time to leave her home in Shariff Saydona Mustapha, one of the towns in Maguindanao where the military claimed the BIFF had strong presence.

“I can’t remember how many times we have evacuated,” she said.