Tisoy weakens, but northern Occ. Mindoro still under Signal No. 3 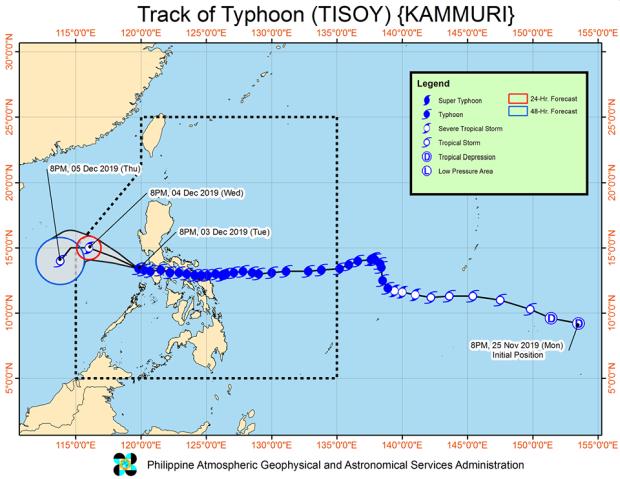 MANILA, Philippines — Typhoon Tisoy weakened further on Tuesday evening as it went over to the West Philippine Sea, according to the Philippine Atmospheric, Geophysical and Astronomical Services Administration (Pagasa).

According to 11 p.m. bulletin of Pagasa, Tisoy was located 180 km west of Calapan City, Oriental Mindoro with maximum sustained winds of up to 120 kph near the center and gustiness of up to 150 kph.

It is moving west-northwest at 15 kph.

Signal No. 1 was raised over southern Nueva Ecija, northern Palawan, Tarlac, northern and central Quezon, western Romblon, Marinduque, rest of Zambales, the rest of Pampanga, the rest of Bulacan, and northwestern Antique.

Pagasa said Tisoy is expected to exit the Philippine area of responsibility (PAR) between Wednesday evening and Thursday morning.

Further, light to moderate rains with intermittent heavy showers during thunderstorms are expected over Metro Manila and the rest of Central Luzon and Calabarzon.