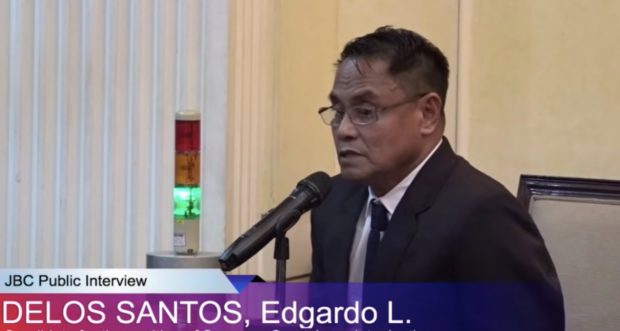 MANILA, Philippines – Dreams did come true for a Court of Appeals Associate Justice known in his province as the “habal-habal” judge after he was chosen by President Rodrigo Duterte to fill up one of the two Supreme Court vacancies.

Delos Santos, a native of Palompon, Leyte, was among the most senior justices of the Court of Appeals. He said he opted to try his luck at the Supreme Court with three more years before his retirement because previously, he deferred to seniority.

While a judge in Dumaguete, he earned a monicker “habal-habal judge” as he uses a motorcycle to bring his wife and children to school.

Delos Santos who admitted he was reluctant at applying for the SC post gave in to his son’s challenge–apply for the SC post and get appointed while his son will pass the Bar. His son is already a lawyer.

As a justice, he affirmed the conviction of a fratman in Cebu City for raping a 14-year-old girl. The high court also affirmed his decision on the Inawayan landfill case.

Meanwhile, Lopez, a native of La Union is a graduate of San Beda College, also the alma mater of the President.

Lopez wrote the decision affirming the validity of a Quezon City Ordinance to regulate the display and maintenance of billboards. He was also part of the Court of Appeals division that denied the writ of Amparo bid of cause-oriented groups to stop red-tagging by the military.

Malacañang has yet to release the appointment paper. The two will take their oath before the President on Wednesday.

‘Habal-habal’ judge hopes to end his career on a high note; vies for SC post