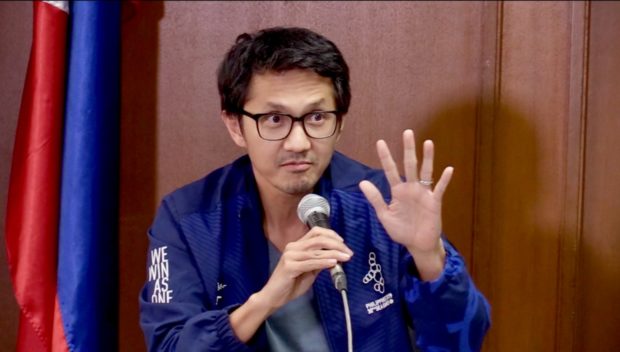 Bases Conversion and Development Authority President and CEO Vivencio Dizon during the press briefing on December 2, 2019 at the Office of the Government Corporate Counsel in Quezon City. Noy Morcoso / INQUIRER.net

MANILA, Philippines — The construction of the sports hub at New Clark City in Capas, Tarlac province, was not part of the original proposal submitted by a Malaysian company that bagged the government contract, the top official of the Bases Conversion and Development Authority (BCDA) said on Monday.

In a press briefing, a visibly irate Vivencio Dizon, BCDA president and CEO, described as “very, very unfair” news reports questioning the legality of the agency’s joint venture agreement (JVA) with MTD Capital Berhad, which financed the project through a P9.5-billion loan from the state-owned Development Bank of the Philippines.

Documents obtained by the Inquirer and information provided by a source familiar with the deal showed that the BCDA may have circumvented the law on public bidding and government circulars on such partnerships.

Contrary to the reports, Dizon said the Office of the Government Corporate Counsel (OGCC) did not render an adverse opinion when then OGCC head Rudolf Philip Jurado flagged the deal in a “contract review” he issued on Jan. 30, 2018.

Dizon said this was affirmed by a separate opinion issued in October 2018 by current OGCC chief Elpidio Vega, who declared that the agreement complied with all existing laws and regulations on such deals.

“The important thing is that (the JVA) is legal, transparent and not disadvantageous to the government,” he said.

He said the contract was advantageous to the public because “the government will not pay a single centavo to the developer until the facilities are completed and accepted [by the BCDA].”

It was the BCDA, “through the advice” of Asian Development Bank (ADB), that demanded in early 2018 that MTD build the 20,000-seat New Clark City Athletics Stadium and the Aquatic Center for the country’s hosting of the 30th Southeast Asian (SEA) Games, according to Dizon.

MTD, which also constructed the Athletes’ Village, had originally offered to build just the National Government Administrative Center (NGAC) on a 60-hectare property of the BCDA in Capas town, Dizon said.

The NGAC will host satellite offices of various state agencies to serve as a “disaster risk and recovery center” and a “backup office” in times of disasters or national calamities.

He said the sports facilities were built not just for the SEA Games but beyond the biennial competition. “The facilities are now being used by our athletes who have been neglected for decades,” he said.

Dizon also acknowledged that it was the BCDA that added stipulations in the contract that gave MTD a return on investment of P2.49 billion as “cost of money” if the BCDA would pay for the sports complex in five years and a 50-percent share from all rental fees for the facilities in the next 25 years, extendable to another quarter of a century.

The 50-50 sharing was in response to Jurado’s comments and suggestions, he said.

He, however, said the payment for the cost of money and rental sharing would no longer apply since the BCDA would pay for the sports hub as Congress had allocated P9.5 billion for it in the P3.7-trillion national budget for this year.

Dizon maintained that the BCDA did not provide any loan guarantee to MTD, saying the Malaysian firm borrowed money from DBP on commercial terms.

Vega, who also spoke at the news conference, said the opinion he issued supported Dizon’s view that the entire contract was consistent with the law, adding that his predecessor’s earlier memorandum did not prohibit the BCDA from entering into a JVA.

“The first opinion already gave a go-signal for the BCDA to enter into such an agreement. It’s just that clarifications had to be made in order for the same to be finally executed,” he said.

“After several opinions, letters sent and discussions with the BCDA, I hereby confirm that the same is really aboveboard and we found no legal impediment to its execution,” he said.

Dizon and Vega, however, were both referring to the “contract review” rendered by Jurado as requested by the BCDA.

Under its owned guidelines for JVA and two separate circulars issued by the Commission on Audit and the Governance Commission for GOCCs, the BCDA was required to secure a “counsel’s opinion” and not a “contract review” before signing the deal with MTD.

Dizon said he and other BCDA officials also “believed” that Jurado’s contract review was enough to proceed with the project, which the bases conversion agency said was finished by MTD ahead of schedule.

Asked why the BCDA needed another opinion from the OGCC if Jurado’s letter was already sufficient, Vega said this would “confirm the clarifications made and that the agreement was really in order.”

Dizon dismissed allegations that the project did not undergo public bidding, pointing out that the “Swiss challenge” to the MTD’s proposal was one of the mode of procurements allowed by law.

In his review of the agreement, Jurado noted that the construction of the sports facilities “falls squarely in the definition of build-transfer.”

“[W]hile its construction will be funded by [MTD], the cost thereof will be reimbursed in five annual installments by the BCDA,” the lead government corporate counsel pointed out. “As such, the sports facility segment is, as a rule, subject to public bidding.”

Defending the actions he and the others had taken, Dizon said the partnership the BCDA entered into with MTD was a “business decision” on the part of the agency since it needed to have the facilities ready for the biennial sports event.

“We believe, together with our advisers from the ADB, that JVA mode was the best mode given the financial, technical and legal considerations. [It] was the best, most practical and most transparent mode to do this project,” he said.