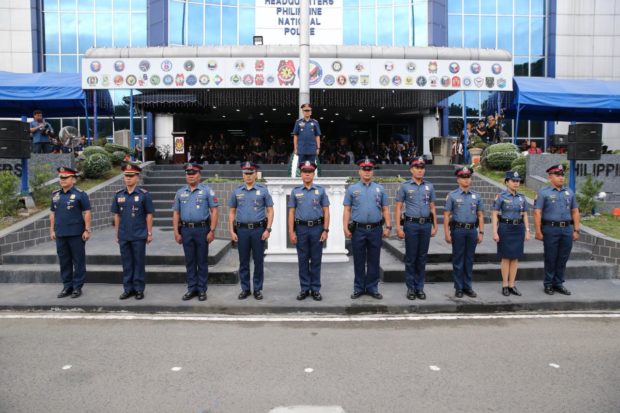 Ten police officers involved in the simultaneous serving of search warrants that led to the arrest of 42 alleged members of the New People’s Army in Bacolod City, Negros Occidental, pose for a photo in front of the Philippine National Police – National Headquarters building at Camp Crame, Quezon City after receiving the PNP Medal of Merit. (Photo from PNP)

MANILA, Philippines — The Philippine National Police (PNP) conferred on Monday the Medal of Merit to 10 police officers involved in the simultaneous implementation of search warrants on alleged members of the New People’s Army (NPA) in Negros Occidental.

The search warrants served in Barangays 33, Bata, and Taculing in Bacolod City on October 31 led to the arrest of 42 “identified members” of the Komiteng Rehiyon-Negros, Cebu, Bohol, and Siquijor for violation of the Republic Act No. 10591 or the Comprehensive Firearms and Ammunition Regulation Act.

Thirteen minors allegedly recruited in the group and were undergoing combat training and indoctrination to the armed movement were also rescued in the operation jointly conducted by the police and the military.

During the string of raids, 32 assorted firearms, three fragmentation grenades, two 40mm ammunition and assorted bullets were also allegedly confiscated from the suspects.

Although the police and the military claimed the arrested persons were members of the NPA, Bayan Muna party-list Rep. Carlos Zarate claimed they were captured from the offices of Bayan Muna, Gabriela, and the National Federation of Sugar Workers in the province.