NEW YORK  – A deadly winter storm that has been tormenting travelers across the U.S. since before Thanksgiving moved to the Northeast on Sunday, packing one last punch of snow and ice as people made their way home after the holiday weekend. 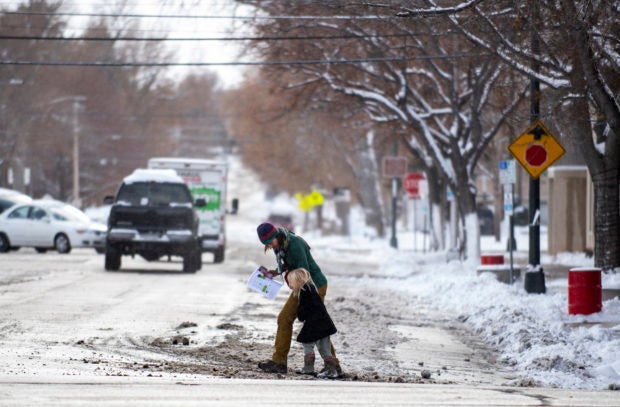 A woman and a child cross the street while battling the weather on a windy and snowy morning in Greeley, Colo., Saturday, Nov. 30, 2019. The weather caused the city to cancel its annual Greeley Lights the Night parade, which was scheduled in the evening. (Alex McIntyre/The Greeley Tribune via AP)

The National Weather Service predicted more than a foot (0.3 meters) of snow in swaths of upstate New York and New England, as well as ice accumulations in parts of Pennsylvania.

The same storm has been pummeling the U.S. for days as it moves cross country, dumping heavy snow from parts of California to the northern Midwest and inundating other areas with rain.

It has been blamed for several deaths.

The bodies of a boy and a girl, both 5, were found in central Arizona after their vehicle was swept away Friday while crossing a swollen creek.

Two adults and four other children were rescued by helicopter, but a 6-year-old girl is still missing. Rescuers are combing the area of Tonto Basin, about 50 miles (80 kilometers) northeast of Phoenix, with helicopters, drones, boats and dogs.

“We want to bring her home safely to her family,” said Lt. Virgil Dodd of the Gila County Sheriff’s Office. “She needs to come home today, and we’re going to do that.”

Two boys, ages 5 and 8, died Saturday near Patton, Missouri, when the vehicle they were riding in was swept off flooded roads.

A 48-year-old man died in a separate incident near Sedgewickville, Missouri, and a storm-related death was also reported in South Dakota.

Road crews were able to reopen all of Interstate 25 and most of I-80 in Wyoming early Sunday after strong winds abated. Major interstates in Colorado were also reopened.

The city of Duluth, Minnesota, was blanketed with 21.7 inches (0.6 meters) of snow as of 12 p.m. Sunday. City officials said streets were impassible and residents should stay inside.

Farther south, precipitation was in the form of rain and thunderstorms.

As the storm shifts east, flight delays and cancellations are continuing to pile up — disrupting travelers heading home after Thanksgiving.

As of 12:30 p.m, more than 500 Sunday flights were cancelled in the U.S., compared with about 400 on Saturday, according to flight tracking site FlightAware.

Newark, New Jersey, has had 33 flight cancellations and some inbound planes are being delayed by an average of more than 2 1/2 hours because of the weather.

There were also dozens of flight delays in Chicago and Minneapolis.

In Denver, 100 flights were canceled Saturday because of high winds.

In the mountain communities northeast of Los Angeles, nearly 9,000 utility customers were without power because of the storm.

Forecasters said a new storm is expected to bring several feet of mountain snow, rain and gusty winds to California through the weekend. Another system is forecast to develop in the mid-Atlantic Sunday, moving into a nor’easter by Monday.

As Sunday’s storm approached, hardy New Englanders made sure to prepared, even if they weren’t really that worried.

Some communities, including Waterbury, Connecticut, have instituted parking bans.

Much of interior Massachusetts could get up to a foot of snow. Boston is projected to get between 3 and 6 inches of snow, but Mayor Marty Walsh says schools will be open on Monday.

Newman, who braved the forecast to take his son to a college basketball game in Hartford, said it took him about five hours to get new tires Saturday because it seemed everyone else was doing the same thing.

“I think there’s some extra hype on this one because it’s the first one of the year,” said Justin Bette, of Southbury, Connecticut. “We’ve been around for quite a while, we think we’ll be OK.”

Read Next
WATCH: Typhoon Tisoy gains strength as it inches closer to Luzon
EDITORS' PICK
PH preps for China virus: Question of when, not if
Beyond water service: Maynilad builds massive infrastructure projects to clean up Metro Manila waterways
Museums ‘put to sleep,’ churches closed amid volcano’s unrest
Seventh judge assigned to handle De Lima case
SM continues to send relief assistance to remote towns in Batangas
Get exciting deals and discounts when you download the new McDonald’s App
MOST READ
Taal Volcano flexes signs of restiveness anew
Part of Aurora Boulevard in Cubao closed from Jan. 25 – Feb. 1
Passengers from Wuhan, China to be flown out of Kalibo, Aklan – CAAP
Lacson on Duterte’s threat to end VFA over Bato’s canceled visa: Where is the connection?
Don't miss out on the latest news and information.