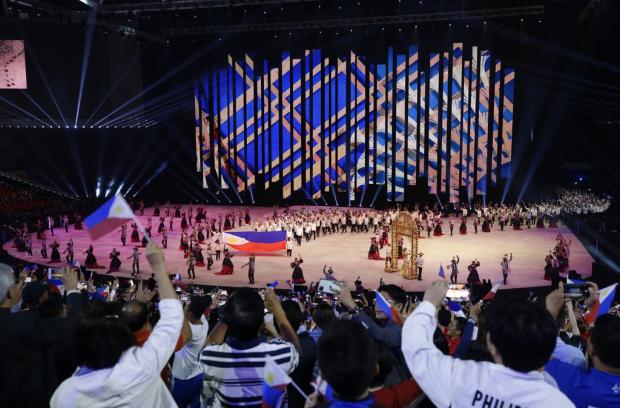 The crowd reacts as members of the Philippine team walk during the opening ceremony of the 30th Southeast Asian Games at the Philippine Arena in Bulacan on Saturday, Nov. 30, 2019. (Photo Aaron Favila / AP)

MANILA, Philippines — The Palace was delighted by the “spectacular” opening ceremony for the 30th Southeast Asian (SEA) Games held at the Philippine Arena in Bocaue, Bulacan.

“The opening ceremony has set the bar high for prospective hosts of international sporting events. For us, this ceremony should remind us that with unity, camaraderie and support, #WeWinAsOne,” presidential spokesperson Salvador Panelo said in a statement.

The Saturday ceremony, said the Palace official, was “a sight to behold.”

“Such a delight to watch a night where all Filipinos, regardless of age, social or political status and location, went in droves to show their support to the country’s hosting of the 30th SEA Games,” he said.

Panelo added that the Philippines, through the kick-off rites for the Games, exhibited before the world the cultural genius of Filipinos through the world-class performances of local artists.

He also noted the “impressive” stage design and production, the cauldron lighting ceremony, and the “mesmerizing” fireworks display.

“The eye-catching sports and musical extravaganza did not escape unnoticed by Singapore’s respected The Strait Times which commented that, ‘It took just two hours to wipe away a week’s worth of bad headlines,’” said the Palace spokesman.

He added that the ceremony demonstrated the “redoubtable ability” of the country to host the biggest sporting events in the world and entertain foreign guests.

“The Palace hopes that this event extraordinaire sets the tone for the handling of the Games until our foreign guests leave the country, bringing with them beautiful memories forever etched in their hearts,” Panelo concluded.