Focus on early release of terror convict in London stabbings 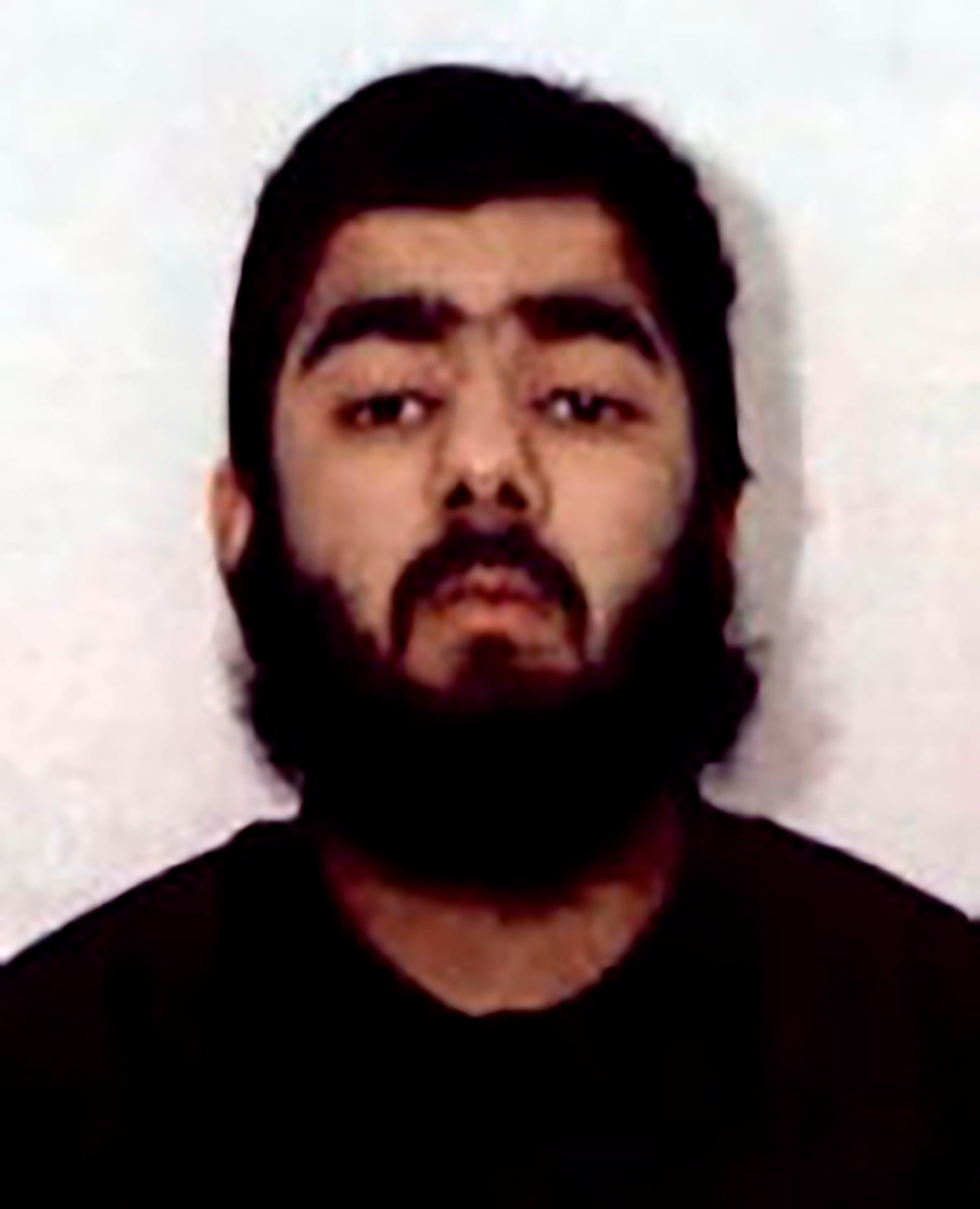 This undated photo provided by West Midlands Police shows Usman Khan. UK counterterrorism police are searching for clues into an attack that left two people dead and three injured near London Bridge. Police said Saturday, Nov. 30, 2019, Khan, who was imprisoned six years for terrorism offenses before his release last year stabbed several people in London on Friday, Nov. 29, before being tackled by members of the public and shot dead by officers on the London Bridge. (West Midlands Police via AP)

LONDON  — Usman Khan was convicted on terrorism charges but let out of prison early. He attended a “Learning Together” conference for ex-offenders and used the event to launch a bloody attack, stabbing two people to death and wounding three others.

Police shot him dead after he flashed what seemed to be a suicide vest. Khan is gone, but the questions remain: Why was he let out early? Did authorities believe he no longer believed in radical Islam? Why didn’t the conditions imposed on his release prevent the carnage?

Britons looked for answers Saturday as national politicians sought to pin the blame elsewhere for what was obviously a breakdown in the security system, which had kept London largely free of extremist violence for more than two years.

Police said Khan was convicted in 2012 of terrorism offenses and released in December 2018 “on license,” which means he had to meet certain conditions or face recall to prison. Several British media outlets reported that he was wearing an electronic ankle bracelet that allowed police to track his movements at the time of the attack.

Authorities seemed quick to blame “the system” rather than any one component.

The Parole Board said it had played no role in Khan’s early release. It said the convict “appears to have been released automatically on license (as required by law), without ever being referred to the board.”

Neil Basu, the Metropolitan Police counterterrorism police, said Saturday afternoon that the conditions of Khan’s release had been complied with. He didn’t spell out what those conditions were or why they failed to prevent him from killing two people.

The automatic release program apparently means no agency was given the task of determining if Khan still believed in radical views he had embraced when he was first imprisoned for plotting to attack a number of sites and individuals in London.

It is not yet known whether he took part in any of the “de-radicalization” programs used by British authorities to try and reform known jihadis.

The former head of Britain’s National Counter Terrorism Security Office, Chris Phillips, said it is unreasonable to ask police and security services to keep the country safe while at the same time letting people out of prison when they are still a threat.

Khan had been convicted as part of an al-Qaida linked group that was accused of plotting to target major sites including Parliament, the U.S. Embassy and individuals including Prime Minister Boris Johnson, then the mayor of London, the dean of St. Paul’s Cathedral in London and two rabbis.

Khan admitted to a lesser charge of engaging in conduct for the preparation of acts of terrorism. He had been secretly taped plotting attacks and talking about martyrdom as a possibility.

Khan and his accomplices had links to radical preacher Anjem Choudary, one of the highest-profile faces of radical Islam in Britain. A mobile phone seized at the time contained material related to a banned group that Choudary founded. The preacher was released from prison in 2018 but is under heavy surveillance and a curfew.

Several people who attended Choudary’s rallies when he was under no controls have been convicted of attacks, including the two al-Qaida-inspired killers who ran over British soldier Lee Rigby and stabbed him to death in 2013.

Johnson, who visited the scene Saturday, said he had “long argued” that it was a “mistake to allow serious and violent criminals to come out of prison early.” He said the criminal justice system “simply isn’t working.”

Corbyn said it is not clear if the Probation Office was involved at all and questioned whether the Parole Board should have been given a role.

He stopped short of blaming Johnson, who was not in office when Khan was set free.

Police said 28-year-old Khan was attending a program that works to educate prisoners when he launched Friday’s attack just yards from the site of a deadly 2017 van and knife rampage.

Basu, the top counterterrorism police officer, said the suspect appeared to be wearing a bomb vest but it turned out to be “a hoax explosive device.” He said police believe Khan was acting alone.

The Islamic State group claimed responsibility for the attack, saying Khan was one of its fighters. The group’s statement, however, didn’t provide any evidence.

One of the victims was named in British media reports as Jack Merritt, a graduate of Cambridge University who was helping organize the conference where the attack began. His father David Merritt tweeted that his son had been killed and had a “beautiful spirit.”

Basu said he could not name the victims until they had been formally identified by the coroner. He asked the public for help with video, photos, and information about the attack.

Health officials said two of the wounded were stable and the third had less serious injuries. A victim who had been in critical condition has improved and is now listed as stable, officials said.

Police on Saturday were searching an apartment block in Stafford, 150 miles (240 kilometers) northwest of London, for clues. Khan was believed to have lived in the area after his release from prison. Police also conducted searches in Stoke-on-Trent.

Learning Together, a Cambridge University-backed prison education program was holding a conference at the hall when the attack started.

Footage from the attack showed several passers-by — including one armed with a narwhal tusk apparently taken from the hall and another with a fire extinguisher — fighting with the suspect before police arrived.

Queen Elizabeth II said in a statement that she and her husband, Prince Philip, were sending their thoughts to everyone affected by the “terrible violence.” She thanked police and emergency services “as well as the brave individuals who put their own lives at risk to selflessly help and protect others.”