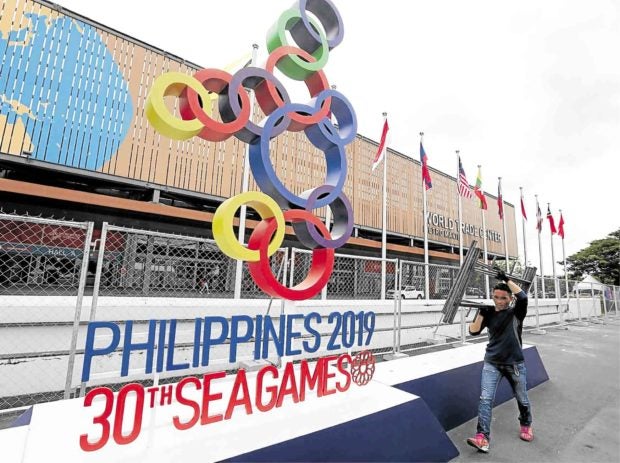 READY FOR ACTION A worker helps clean up World Trade Center in Pasay City which will be a venue for fencing, karatedo and wushu events of the 30th Southeast Asian Games that unfolds at 7 p.m. of Nov. 30. —MARIANNE BERMUDEZ

The way organizers have advertised it, the opening ceremony of the 30th Southeast Asian Games (SEAG) will be the first rub of balm on the national burn brought about by a series of unfortunate incidents that struck early into the country’s hosting of the biennial meet.

That remains to be seen —literally.

Shrouded in mystery, the inaugurals reel off on Saturday in two venues 88 kilometers apart —Philippine Arena in Bulacan and New Clark City (NCC) in Tarlac—with officials of the Philippine Southeast Asian Games Organizing Committee (Phisgoc) promising an event to remember.

“It’s going to be something that was never done before and we are looking at a very memorable opening ceremony,” said Phisgoc chief operating officer Ramon Suzara.

Officials have kept details of the opening rites behind a veil of secrecy amid questions raised all over social media as to why a P55-million cauldron, supposedly the highlight of the opening, was placed in Tarlac while the parade of nations and other curtain-raising activities will be held in Bulacan.

Only a trickle of information has leaked out. Officials said eight-division world boxing champion Manny Pacquiao would light the cauldron in a “Rocky-inspired” sequence, a reference to the classic Sylvester Stallone film.

Phisgoc officials hope that the opening ceremonies would have enough wow effect for the committee to rebound from last week’s viral negative reports about foreign and local athletes complaining of logistical oversights, from delayed transports and hotel check-in to insufficient food choices.

Allegations of corruption have also bubbled to surface, leaving Phisgoc officials scrambling to refocus the public eye on the athletic side of the event.

Phisgoc chair and Speaker Alan Peter Cayetano has denied any misuse of funds, vowing to hunt down and expose an alleged well-funded plot to ruin the Philippine image as Games host. Suzara has appealed to the media to put “a positive note on what we have done,” while also accusing journalists of unnecessarily putting the country in a bad light.

Cayetano has said the opening ceremonies would make the country forget about all the problems that has beset the hosting so far.

The Philippine Sports Commission (PSC) has also pleaded with the public to support the national athletes in their bid to bring pride to the country.

“We will have 11 days of competition, and I can see the 1,496-strong Philippine contingent fighting it out with their every breath and exerting their effort to the last drop of their sweat to bring honor to this country, in front of their very own blood and flesh,” PSC Chair Butch Ramirez said in a statement.

“Let us all keep in mind that for some of these athletes, sports is their path to a better life and escape the cycle of poverty and hopelessness. To all of them, this is their chance to reach their dreams. They all deserve our support,” he added.

Support for the Filipino athletes is expected to snowball starting on Sunday, when Philippine triathletes try to corner the first gold medal for the country in the Games.

The Philippines finished a measly sixth place two years ago in Kuala Lumpur, Malaysia, but has its hopes high that it will contend for the overall championship this time. And history is on its side. The last time the country hosted the regional Olympics, it collected 112 gold medals to finish first on the medal table.

Miss Universe 2015 Pia Wurtzbach is expected to march with Team Philippines in the parade of nations, which will be treated with a festive Santacruzan feel.

Celebrity apl.de.ap of the Black-Eyed Peas band, who has Filipino roots, will entertain the Philippine Arena crowd with several numbers, including his smash hit “Bebot.” Local celebrities Christian Bautista and KZ Tandingan have also been tapped to perform in the event.

Officials said there will be a light show at Philippine Arena while digital fireworks will light up NCC. The entire opening program was produced by the same company that conceptualized the 2012 London Olympics.

Much of the suspense, however, will be reserved for the lighting of the cauldron. Asked how the lighting would be woven into the opening ceremony’s script and spectacle, Suzara merely replied: “It’s a secret.”

Spectators who will troop to Philippine Arena—and can avail themselves of the 10,000 tickets to be given for free on orders of President Duterte—will most likely get to view the cauldron lighting on a widescreen monitor. (See related story on this page.)

While Pacquiao is expected to mimic a scene from “Rocky” in lighting the cauldron, world champion gymnast Carlos Yulo, the original torchbearer, won’t be present as he prepares for his gold medal quest. In his place assisting Pacquiao will be world champion female boxer Nesthy Petecio, another bright gold medal hope.

“Nesthy and Senator Manny will be the torchbearers because [Petecio] won’t have any events to participate in [the following day],” Philippine Olympic Committee president and Cavite Rep. Bambol Tolentino told reporters at a press conference on Wednesday. “Caloy was supposed to be the one but he has an event scheduled.”

While there has been no credible threat to the Games, security will be tightened starting on Saturday, with Phisgoc announcing a clear-bag policy for all Games venues.

Fans who want to enter venues are restricted to bringing only one plastic, vinyl or PVC bag, a transparent storage bag (which can be a one-gallon freezer bag, Ziploc bag or similar), or a small strapless clutch that does not exceed 4.5 inches in height and 6.5 inches in width.

Other kinds of bags such as backpacks, fanny packs, suitcases, purses, or duffel bags are strictly prohibited.

A list of banned items will be posted in all venues, with security personnel reserving the right to search everyone who will watch games live.

The increase in security comes on the heels of an announcement that fans can now watch events for free, with those who had already purchased tickets to be given priority entrance and some freebies.

“The organizing committee has decided that all games that haven’t been sold out yet will be free to the public,” Cayetano said.

The SEA Games also faces another challenge as Typhoon “Tisoy” (international name: Kammuri) is expected to enter the Philippine area of responsibility, and initial tracking has it making a beeline for Central Luzon, which hosts the main hubs of the Games.

But Phisgoc executive director Tom Carrasco has said that organizers have storm-proofed the Games, with several alternate plans queued to ensure that the biennial meet doesn’t go beyond its scheduled finish on Dec. 11.

“We are prepared for that,” Carrasco said.

“Let us all enjoy this experience, for when will we ever have the Games visit us again? It is our chance to see high-level competition played within our backyard. So I enjoin all of you, get your flaglets waving and let us troop to the venues to show our support to our teams,” Ramirez said.