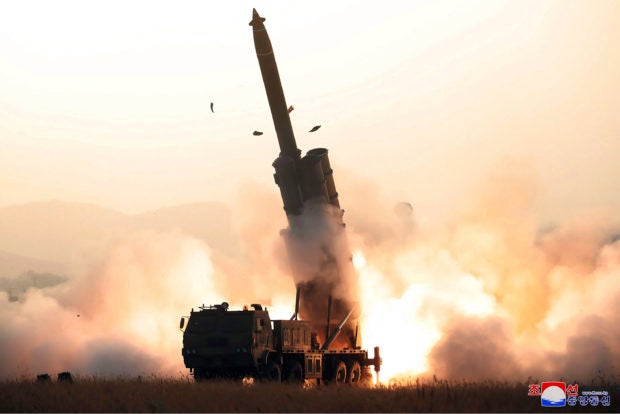 This Thursday, October 31, 2019, photo provided by the North Korean government, shows what it says a test firing of a super-large rocket launcher by the Academy of Defense Science in North Korea. Independent journalists were not given access to cover the event depicted in this image distributed by the North Korean government. The content of this image is as provided and cannot be independently verified. Korean language watermark on image as provided by source reads: “KCNA” which is the abbreviation for Korean Central News Agency. (Korean Central News Agency/Korea News Service via AP)

The projectiles were fired eastwards from South Hamgyong province and came down in the Sea of Japan, also known as the East Sea, South Korea’s Joint Chiefs of Staff (JCS) said.

They added that the launch, the latest in a series by Pyongyang, was carried out at 16:59 pm local time (0859 GMT) — or the early hours on the east coast of the United States, during one of the country’s biggest annual holidays.

It was also one day short of the two-year anniversary of the North’s first test of its Hwasong-15 intercontinental ballistic missile, which analysts say is capable of reaching the entire US mainland.

Pyongyang is banned from firing ballistic missiles under UN Security Council resolutions, and Japanese Prime Minister Shinzo Abe said that Thursday’s launch was the latest in a series of violations.

“North Korea’s repeated launches of ballistic missiles are a serious defiance to not only our country but also the international community,” he told reporters in Tokyo.

In Washington, a State Department official said the US was monitoring the situation and consulting with allies in the region.

“We call on North Korea to avoid provocations, abide by obligations under UN Security Council Resolutions, and return to sustained and substantive negotiations to do its part to achieve complete denuclearization,” the official said.

Thursday’s launch came after Pyongyang fired what it called a “super-large multiple rocket launcher” system last month, and the JCS said the latest devices were presumed to be of a similar type.

They flew 380 kilometres (236 miles) and reached a maximum altitude of 97 kilometers, the JCS added.

Nuclear negotiations between the US and the North have been at a standstill since the Hanoi summit between President Donald Trump and leader Kim Jong Un broke up in February, and Pyongyang has since demanded Washington change its approach by the end of the year.

“North Korea is growing anxious as its deadline approaches,” said Shin Beom-chul of the Asan Institute for Policy Studies.

“That’s why it’s carrying out these provocations, which is the typical North Korean playbook to get more concessions from the US.”

Trump has played down the recent launches, repeatedly pointing to North Korea’s moratorium on nuclear tests and intercontinental ballistic missile launches as foreign policy successes for him.

Trump and Kim adopted a vaguely-worded statement on the “complete denuclearisation of the Korean peninsula” at their first summit in Singapore in June last year, but little progress has since been made.

North Korea is under multiple sets of international sanctions over its nuclear weapon and ballistic missile programmes and lifting some of them was a key demand of the North’s in Hanoi.

In June, Trump and Kim agreed to restart working-level talks during a meeting at the Demilitarized Zone dividing the peninsula and the two sides met in Sweden in October, only for Pyongyang to walk away.

Earlier this month, Seoul and Washington said they would postpone planned joint military exercises to ease diplomacy with the North, an announcement Pyongyang dismissed.

The North has long condemned the joint drills, which it calls preparations for invasion, and carried out multiple missile launches in the summer in protest as the allies carried out their annual exercises.

North Korea has issued a series of increasingly assertive comments in recent weeks as time runs down on its end-of-year deadline.

Trump hinted at the prospect of a fourth meeting with Kim in a tweet earlier this month, only to be rebuffed by the North, which said it had no interest in summits “that bring nothing to us”.