SEA Games mess: Duterte ‘sure’ Alan not involved in corruption 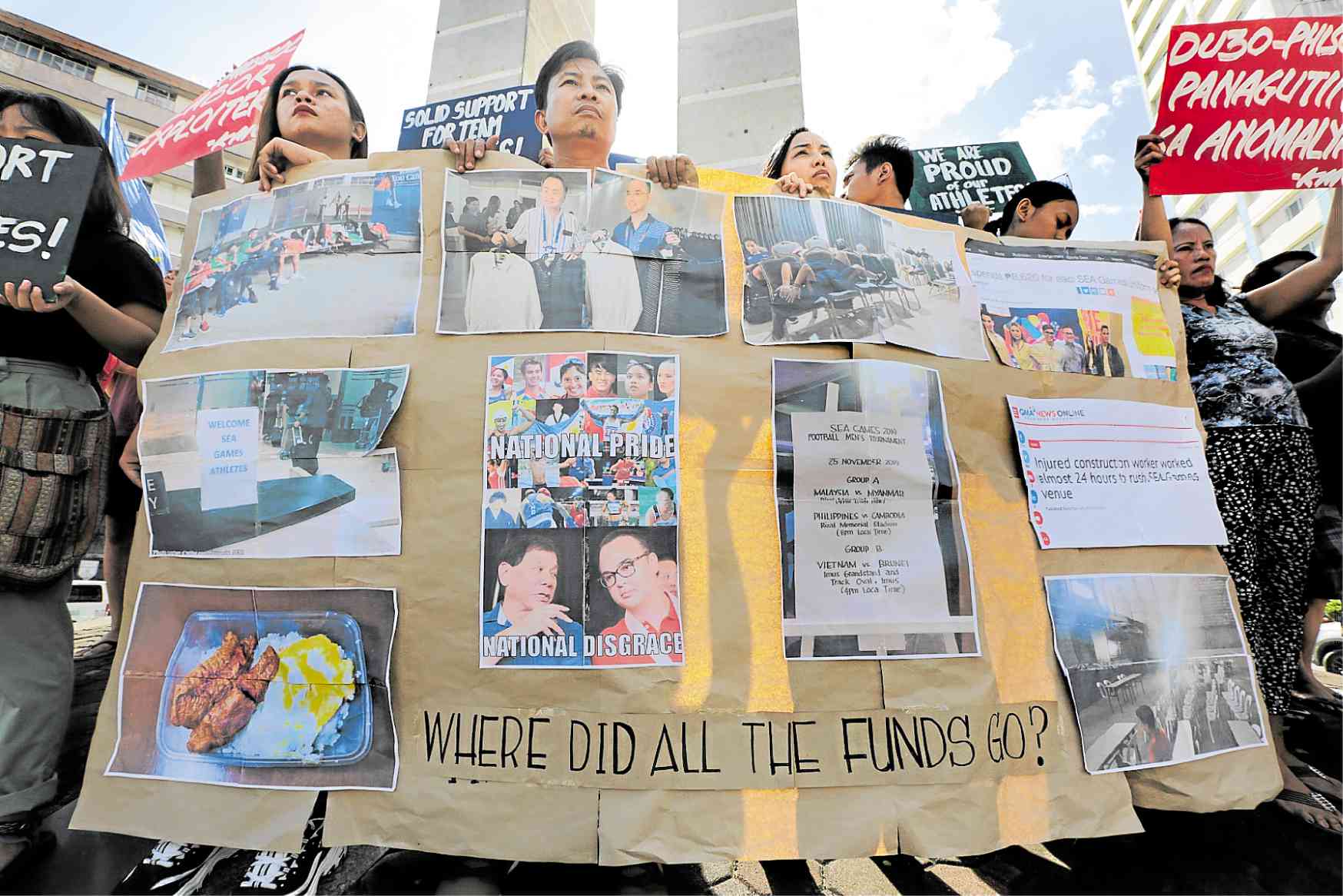 PROTEST BEFORE THE GAMES Members of various groups stage a rally at Mabuhay Rotunda in Quezon City to condemn what they call the incompetence and inefficiency of the administration in hosting the 30th Southeast Asian Games. —GRIG C. MONTEGRANDE

Even before the investigation of alleged irregularities in the preparations for the 30th Southeast Asian Games (SEAG) could begin, President Duterte has already exonerated Speaker Alan Peter Cayetano, chair of the committee coordinating the Games.

“Yes he has to answer but … I am sure Cayetano is not involved in corruption,” the President said in Malacañang on Thursday night.

Cayetano is head of the privately formed Philippine SEA Games Organizing Committee. (Phisgoc), which has drawn flak for logistical lapses that have inconvenienced Filipino and foreign athletes.

Mr. Duterte said he would not be investigating Cayetano, but others who were delegated tasks by the Speaker.

The President said he would tap people who retired from the Commission on Audit, lawyers, prosecutors and his fraternity brothers to conduct the investigation.

Mr. Duterte exonerated Cayetano on the same day that presidential spokesperson Salvador Panelo said no one would be spared from the government probe even the President’s known allies, such as Cayetano.

“There is no sacred cow in this government,” Panelo said. “We’ve been repeatedly saying that those who transgress the law will be accountable.”

Cayetano on Thursday hit back at his detractors, including journalists whom he insinuated may have been bribed into writing negative reports on the country’s hosting of the Games.

The Phisgoc chair also challenged Senators Franklin Drilon and Panfilo Lacson to submit themselves to a lie detector test, as he disputed allegations of corruption against him as head of the organizing committee.

Foreign journalists based in the country denounced Cayetano.

In a statement, the Foreign Correspondents Association of the Philippines (Focap) said Cayetano’s sweeping accusations and threats of libel suits “are totally unacceptable and tend to intimidate journalists from reporting irregularities objectively.”

Focap also said that the call made by the organizers for the media to report only the good “betray our bedrock mandate of providing the public with truthful information that is at the heart of the basic freedoms guaranteed by the Constitution.”

At a press briefing, Panelo said a “displeased” Mr. Duterte ordered an investigation of allegations of poor hotel and transport arrangements for the athletes, which made the rounds of social media.

“The critics have a point. There is indeed something wrong with the preparations,” Panelo said.

In San Juan City, Cayetano bewailed the accusations by Drilon and Lacson, his former colleagues in the Senate.

Drilon has questioned the role of Phisgoc after it was allotted P1.5 billion in public funds to oversee the preparations for the Games.

Lacson likened the diversion of the funds to Phisgoc, a private foundation, to the funneling of pork barrel funds into foundations set up by businesswoman Janet Lim-Napoles, who is facing plunder charges.

“I’m willing to have a lie detector test, the three of us. And I can look anyone in the eye saying we did not make any profit out of the SEA Games. On the contrary, we even had to shell out from our pockets,” Cayetano said.

In an interview with reporters, Cayetano threatened to file cyberlibel charges against people who have supposedly defamed “not only [him], but the entire country” for spreading what he described as “lies” about the Games.

“I am ready for any investigation after the SEA Games. Be prepared, too, for an investigation because I will unmask you,” he said.

Cayetano said he was baffled by Drilon and Lacson hurling accusations against the Games despite agreeing to a supposed “ceasefire.”

“If you want to hit your own country, that is up to you,” he said.

Cayetano maintained that it was Drilon who was instrumental in slashing the funding for the Games by P2.5 billion, despite the latter’s earlier denial.

According to Cayetano, even Drilon did not question the SEA Games budget when it went through the Senate.

Senate records of budget deliberations in December 2018 showed that Drilon had questioned the propriety of the request by Cayetano, a former foreign secretary, to insert P7.5 billion for the SEA Games in the 2019 budget of the Department of Foreign Affairs (DFA).

It was Foreign Secretary Teodoro Locsin Jr. who requested the Senate to transfer the huge funding for the Games from the DFA to the treasury but the P7.5 billion ended up with the Philippine Sports Commission (PSC).

Cayetano said he had sent a memorandum to Executive Secretary Salvador Medialdea asking that the whole Games budget be put under the Office of the President.

“He replied after consulting everyone, and their legal,  it should be under the DFA because I was then the [foreign] secretary and (Phisgoc) chairman,” Cayetano said. “It was for expediency.”

He said Phisgoc accepted the hosting chores for the Games after the PSC declined supposedly the lack of people to handle funds as large as P7.5 billion.