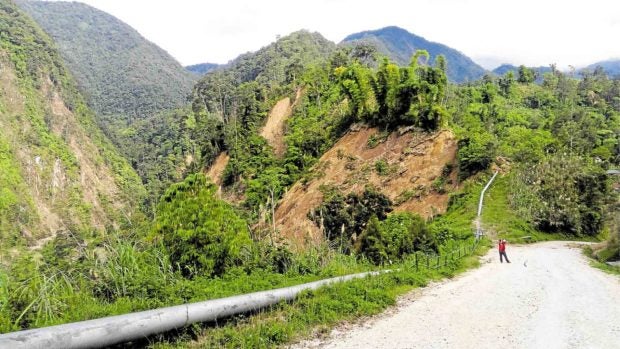 KIDAPAWAN CITY—The local government of Kidapawan has stood firm in its decision not to allow residents of several upland villages in the city to go back to their landslide-prone communities.

This developed as Cotabato Gov. Nancy Catamco questioned the declaration of several areas which fall within the ancestral domain of indigenous peoples as “no-build zones,” making these off-limits.

Catamco said the leaders of indigenous peoples in the area could have been consulted.

Due to landslides triggered by the series of quakes last October, hundreds of residents in Ilomavis, Perez and Balabag villages were forcibly relocated from their homes.

They were later advised by the city government not to return to their respective communities because geologists from the Mines and Geosciences Bureau (MGB) and the Philippine Institute of Volcanology and Seismology (Phivolcs) have found these areas prone to landslides, apart from the large cracks on the ground because of the quakes.

Another landslide may be caused by another earthquake or by heavy rains.

Kidapawan Mayor Joseph Evangelista, in a statement, said he only wanted to protect the lives of the people living in the three villages, hence the local government’s abiding by the recommendations of the two agencies.

Evangelista said the identification of “no-build zones” was “an indispensable part of the process of planning” for the resettlement of the quake evacuees.

He said some 1,700 families needed to be relocated from their communities to safer places.

These families are still staying in evacuation centers amid the search for a suitable relocation site.

Based on discussions with the affected communities, Evangelista said the relocation sites must not be far from their workplaces.

“The MGB and Phivolcs are not restricting them from tending their farms, so we must find a site within their respective barangays but which are not exposed to the risk of landslide or rock falls,” the mayor said.

He added that consultations are being undertaken with respective barangay councils and tribal leaders “to ensure that any proposal will be fully understood and acceptable to stakeholders.”

About 3,000 hectares of the city’s territory in Barangay Ilomavis, at the foot of Mt. Apo, are part of the 4,000-ha ancestral domain of the indigenous Manobo tribe.

Evangelista acknowledged that the recommendations of the MGB and Phivolcs geologists have yet to be incorporated into a revised comprehensive land use plan and zoning ordinance for Kidapawan.

He said they were already working on its legislation to provide legal basis to resettlement initiatives.