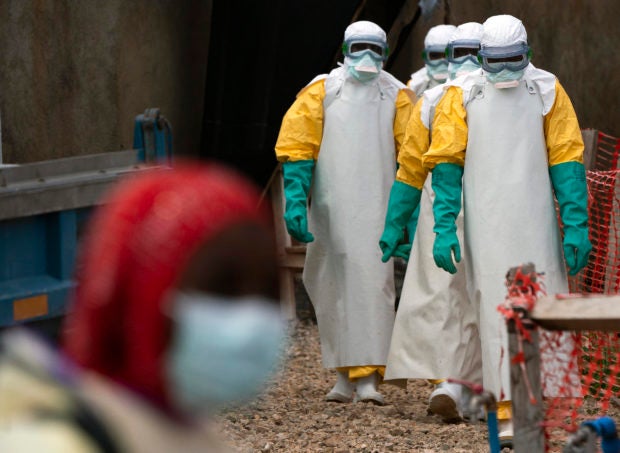 In this Tuesday, July 16, 2019 file photo, health workers dressed in protective gear begin their shift at an Ebola treatment center in Beni, Congo DRC. The World Health Organization said Friday, Novermber 22, 2019, there has been “a very dangerous and alarming development” in efforts to end the Ebola outbreak in eastern Congo, warning that the eruption of violence may re-ignite the epidemic. (AP Photo/Jerome Delay, File)

JOHANNESBURG — Armed groups have attacked and killed Ebola response workers in eastern Congo, the World Health Organization (WHO) chief said Thursday, an alarming development that could cause the waning outbreak to again pick up momentum.

“We are heartbroken that our worst fears have been realized,” Tedros Adhanom Ghebreyesus said on Twitter. He did not say how many people were killed in the attacks in Biakato Mines and Mangina. Others were wounded, he said.

This is not the first time that health workers trying to contain the second-worst Ebola outbreak in history have been targeted. Some have called this outbreak more complicated than any other, comparing the environment to a war zone. Several rebel groups are active in the region.

The latest attacks come after days of deadly unrest in the city of Beni, where residents outraged by repeated rebel attacks stormed the local United Nations peacekeeping base, demanding more protection. WHO evacuated 49 of its staffers there, leaving 71 in place.

Ebola response work was put on lockdown in Beni, dismaying health experts who say every attack hurts crucial efforts to contain the deadly virus.
The number of cases had been dropping in the yearlong outbreak which has killed more than 2,100 people. Several days this month, zero cases were reported. Previously, cases have surged after attacks on health workers and facilities.

In one example of how any pause can sharply affect Ebola containment efforts, WHO has said no one in Beni could be vaccinated against the virus on Monday. The U.N. health agency previously could trace more than 90% of contacts of infected people in the city but now that figure is just 17%, a U.N. spokesman said Tuesday.

Residents accuse Congolese and U.N. forces of not doing enough to protect civilians from the rebels who fight for control of the region’s vast mineral wealth. The Allied Democratic Forces armed group alone is blamed for the murders of more than 1,500 people in and around Beni in the past four years.

After an emergency meeting Monday, President Felix Tshisekedi decided to allow joint operations between Congolese and U.N. forces in Beni following the protests that also burned the town hall.

Far from the capital, Kinshasa, some traumatized residents in the densely populated border region near Uganda and Rwanda are wary of outsiders, further complicating the Ebola containment work in a part of Congo that had never recorded the virus before.

Health workers continue to battle misinformation and reluctance to seek treatment for the virus that is largely spread via close contact with the bodily fluids of infected people, including the dead.