BUENOS AIRES, Argentina  – An Argentine bishop close to Pope Francis appeared voluntarily for a court hearing Wednesday ahead of a trial on charges of sexual abuse of two former seminarians in one of several cases that have shaken the church in the pontiff’s homeland. 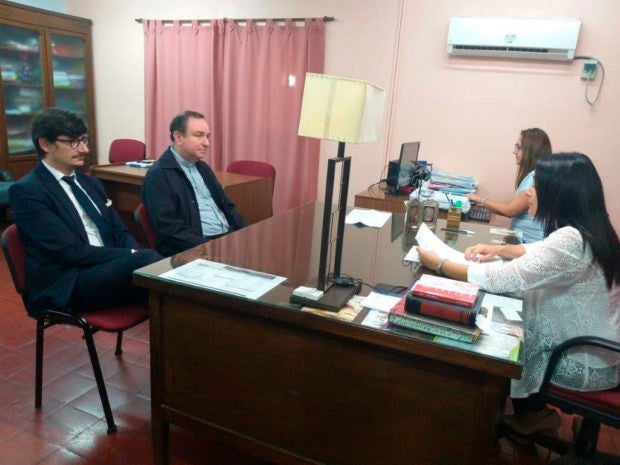 In this handout photo provided by Salta’s government Judicial Branch Press Office, Argentine bishop Gustavo Zanchetta, second from left, a cleric close to Pope Francis, appears alongside his lawyer, Javier Belda Iniesta, at a judicial hearing in Oran, the northwestern province of Salta, Argentina, Wednesday, Nov. 27, 2019. Zanchetta was notified by members of the court that he will be put on trial for alleged abuses against two former seminarians. (Salta’s government Judicial Branch Press Office via AP)

Bishop Gustavo Zanchetta had returned to Argentina from the Vatican to attend the session before Judge María Laura Toledo Zamora in the northwestern city of Oran, where he had served as bishop before resigning in July 2017.

Prosecutors accuse Zanchetta of continuing sexual abuse, a charge that could result in a 10-year sentence.

Zanchetta denies the allegations, which are also the subject of a church canon-law process.

The bishop’s canon law attorney, Javier Belda Iniesta, suggested Wednesday that the allegations “could enter in the ambit of perception,” such as “a hug that lasted longer than normal, a kiss that instead of the cheek could fall on an ear, touching a leg, risque jokes.”

The hearing was to establish who represents Zanchetta — in this case a public defender — and his contact details. Prosecutors earlier had unsuccessfully sought an international arrest warrant, arguing they couldn’t contact him.

No date was set for the start of the trial and the defense is seeking to nullify the process.

The judge allowed Zanchetta to return to the Vatican, where he holds a financial post, on condition that he not change lodgings from the Santa Marta hotel — a lodging also used by the pope — without the court’s permission.

It’s one of several sexual abuse cases that have rocked the church recent. On Monday, two priests were sentenced to more than 40 years in prison for abusing children at a school for the deaf.

The Zanchetta case is particularly vexing for Francis because the pope was aware of allegations of inappropriate behavior by his onetime protégé in 2015, two years before Zanchetta resigned as bishop of Oran.

Francis allowed him to step down in 2017 for “health reasons,” but then named him to a senior Vatican administration position a few months later.

Francis acknowledged in a TV interview earlier this year that he asked Zanchetta about the initial accusation, involving nude selfies on the bishop’s cellphone. The pope said he gave Zanchetta the benefit of the doubt after he claimed his phone had been hacked.