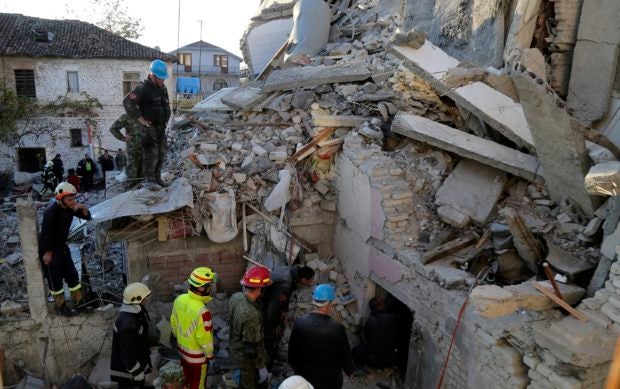 Rescuers try to free a man from a collapsed building after a magnitude 6.4 earthquake in Thumane, western Albania, Tuesday, Nov. 26, 2019. Rescue crews with excavators searched for survivors trapped in toppled apartment buildings and hotels Tuesday after a powerful pre-dawn earthquake in Albania killed at least 18 people and injured more than 600. (AP Photo/Visar Kryeziu)

DURRES, Albania — The death toll from a powerful earthquake in Albania has risen to 25 overnight as local and international rescue crews continue to search collapsed buildings for survivors.

Authorities said four more people had been confirmed dead early Wednesday, while more than 600 people were injured in the magnitude 6.4 quake that struck the country’s coastal cities.

In Durres, Albania’s second-largest city, on the Adriatic Sea, residents slept in tents and cars and at a soccer stadium as powerful aftershocks from the earthquake continued.

Flags are flying at half-staff on public buildings around the country as Albania observes a national day of mourning.