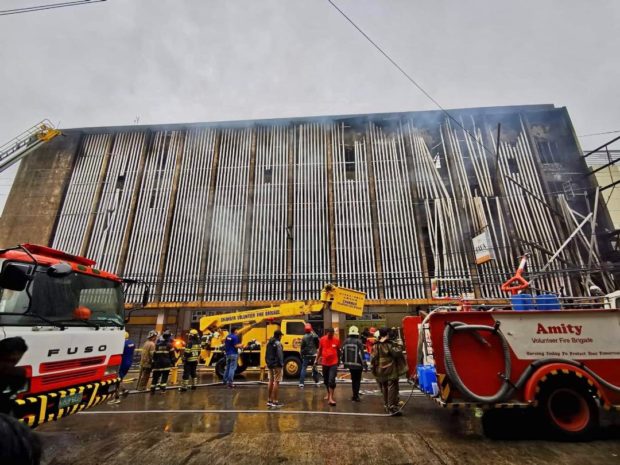 BACOLOD CITY, Negros Occidental, Philippines — Residents here woke up to grim news that six persons, including a 12-year-old boy, died in a five-hour-long blaze that hit a pension house before dawn on Tuesday.

The six may have died from suffocation as the fire raged for about five hours inside Java Pension House on Gonzaga and Lacson Streets, Bacolod fire chief Publio Ploteña said.

Some guests, including foreigners, escaped by climbing down from the windows and the roof of the five-story building using a ladder put up by firemen. An Australian was among those injured.

The two others were unidentified at press time.

Firemen rescued Australian Paul Cadognago, 75, inside his room. Cadognago was brought to a city hospital for treatment of his injuries.

Japanese tourist Katsumi Suzuki, 67, and three others were pulled out by firemen through a window at the fourth floor.

Suzuki, a tourist in the city for a month now, said he woke up to the smell of smoke. Other guests climbed down a ladder from the roof as dark smoke billowed.

The fire broke out at 4:37 a.m. at the ground floor and spread to other floors. Investigators have yet to determine the cause and assess the damage.

The 55-year-old building used to be home to the famous Bascon Hotel, which hosted glamorous parties and counted the country’s vice presidents, senators and foreign ambassadors among its guests, until its owners leased it to the Java family.

Oscar “Dodong” Bascon, who ran the hotel for 40 years from the mid-1960s, said it broke his heart to see the pension house engulfed in flames.

Bascon and his wife, Carminia, quit the hotel business after 40 years. Carminia’s niece, Ann Abello, then leased the building to Don Bagatsing, who then subleased it to the Java family.