TOKYO  – Pope Francis met Monday with victims of Japan’s 2011 nuclear disaster and called for the world to rethink its reliance on nuclear power as it considers the planet it wants to leave to future generations. 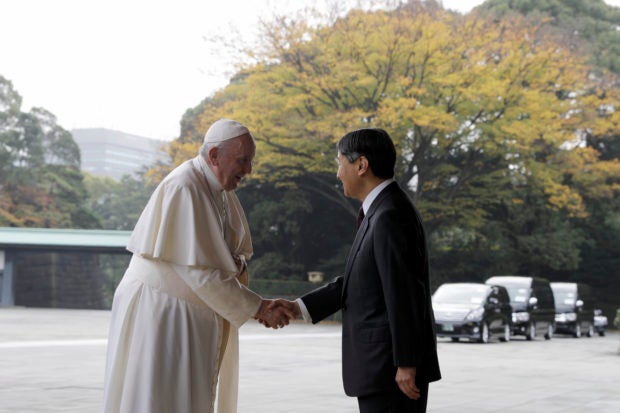 Francis recalled that Japan’s Catholic bishops called for the abolition of nuclear power plants in the aftermath of the “triple disaster,” in which three reactors at a nuclear plant in Fukushima melted down after an earthquake triggered a tsunami.

The meltdown coated the area in radioactive fallout and at one point forced the displacement of 160,000 people. Nine years later more than 40,000 people still can’t return home.

Francis didn’t make the call to abolish nuclear power in his speech before victims. But in citing the position of Japanese bishops, he made clear that “important decisions will have to be made about the use of natural resources, and future energy sources in particular.”

“As we think about the future of our common home, we need to realize that we cannot make purely selfish decisions, and that we have a great responsibility to future generations,” he said. “Consequently, we must choose a humble and sober way of life that recognizes the urgent realities we are called to face.”

During his first full day in Japan on Sunday, Francis visited Nagasaki and Hiroshima — sites of where two U.S. atomic bombs were unleashed in World War II — and said both the use and possession of nuclear weapons was “immoral.”

He has not articulated a position on nuclear power, but the Vatican has previously called for the “safe, secure, and peaceful, development and operation of nuclear technologies.”