MANILA, Philippines – Justice Secretary Menardo Guevarra declined a nomination to the Supreme Court because he is “still in love with the DOJ.” 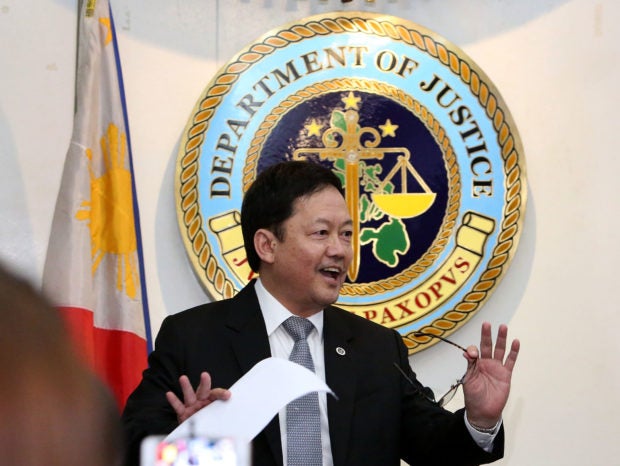 “I have known Secretary Guevarra to be a person of proven competence, integrity, probity and independence and his sense of patriotism through his socio-civic engagements,” Victorino said.

Guevarra admitted that in 2016, he considered applying to the Supreme Court.

“It is one of my career options,” he said in a speech before members of the Prosecutors League of the Philippines.

“Do you know the feeling of someone who has always desired a wonderful person to be his or her spouse in the future? But somewhere along the way, he bumps into someone else whom he likes and desires,” Guevarra asked.

He said that’s what he felt when circumstances led him to Padre Faura, “not that part of Padre Faure near Taft Avenue (referring to the Supreme Court).”

“I found out it was good, it was exciting, so Justice Victorino thank you for nominating me but I’m still in love with the DOJ,” he said.

While he said he is not closing doors to a Supreme Court post, he said he has goals that needed to be achieved–1. fill up vacant positions at the National Prosecution Service; 2. substantially reduce the backlog of petitions for review; 3. putting order into the correctional system and other agencies under the Department of Justice such as the Bureau of Immigration (BI), Board of Pardons and Parole, among others; and 4. continuing the modernization of the National Bureau of Investigation and Bureau of Immigration.

“I want na before I am done with my tenure with the DOJ, I am able to do something about this probably in terms of legislation, especially the BI and also something’s got to be done with the LRA to make it more efficient,” Guevarra said.

When he assumed the DOJ posts, Gueverra said the backlog of cases was pegged at 18, 000.

“That such a huge backlog exists is worrisome. That backlog includes cases involving victims denied justice. They are denied justice because their complaints have been wrongfully dismissed or because they have been denied by circumstance or shortage of resources. That cases of those denied justice have for so long languished in our docket constitutes the travesty which I hope to address,” he said.

He added that the DOJ is also hoping to release a crime index that will provide guidance to prosecutors to remove if not lessen “future incidents of injustice.”

He admitted that while he does not expect to complete all his goals, “I hope that I’ll be able to make a dent and do something to set the progress in motion.”