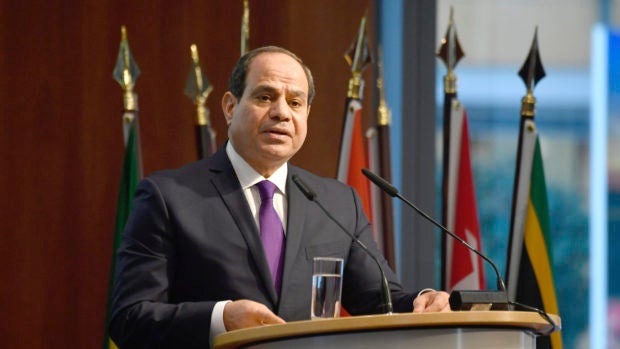 Egypt’s President Abdel Fattah al-Sisi speaks at the “G20 Investment Summit – German Business and the CwA Countries 2019” on the sidelines of a Compact with Africa (CwA) in Berlin, Germany on Nov. 19, 2019. (John MacDougall/Pool via AP)

CAIRO — An Egyptian media outlet critical of the government of President Abdel-Fattah el-Sissi said plainclothes police have raided its headquarters in Cairo.

Mada Masr, one of a shrinking number of independent news websites in Egypt, reported the raid in a tweet Sunday. It says: “Staff are currently being held inside, and their phones have been switched off.” It was unclear how many people were inside the office.

A police spokesman was not immediately available for comment.

The raid came a day after Mada said security forces detained one of its editors, Shady Zalat, at his home in Cairo early Saturday.

Mada Masr, which publishes critical reports about the government and security agencies, is one of the hundreds of websites blocked by the Egyptian government in recent years.