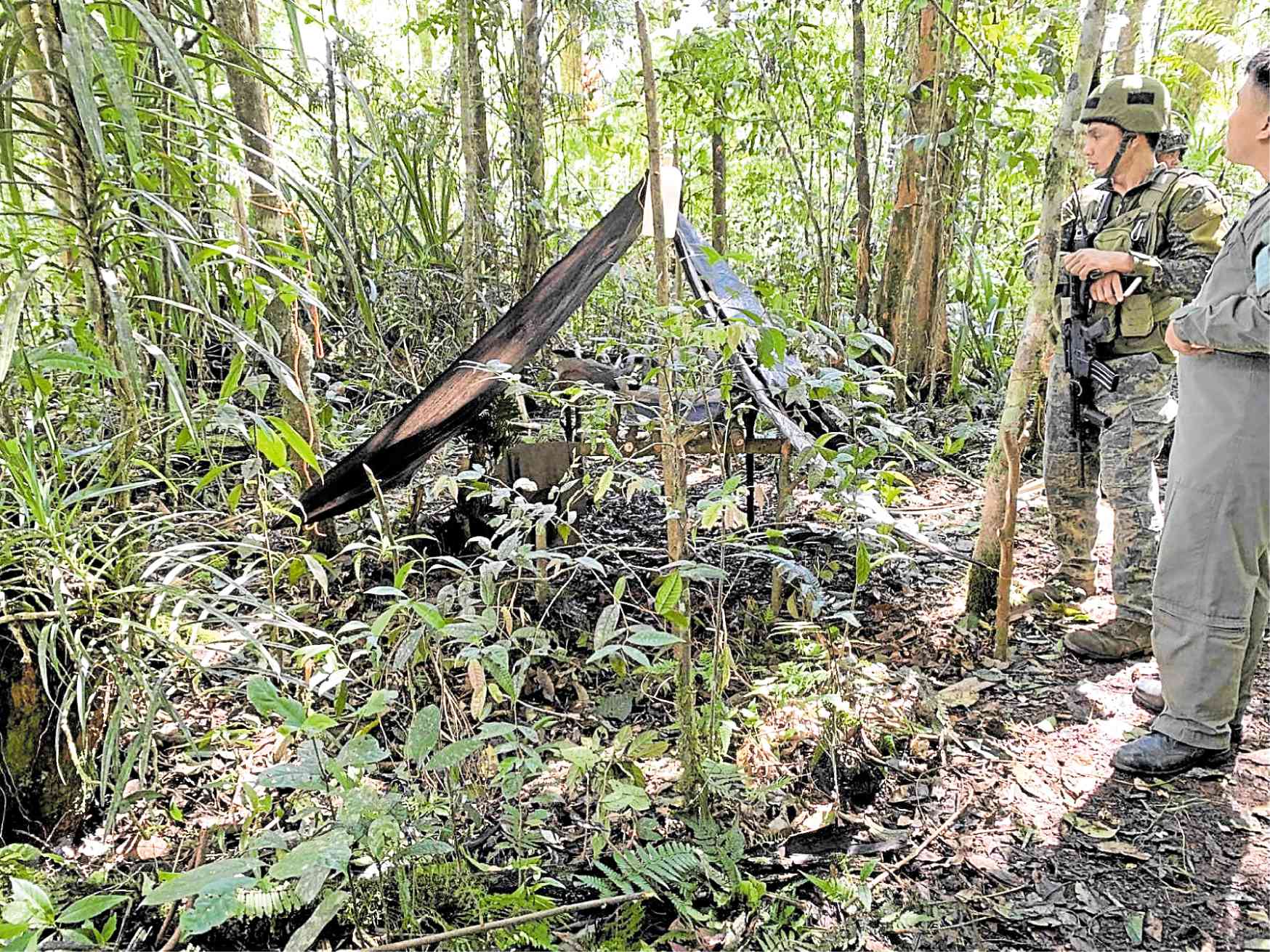 JUNGLE LAIR Soldiers inspect one of the tents used by members of an Islamic State-linked group at an encampment in the mountains of Madalum and Madamba towns in Lanao del Sur. —PHOTO COURTESY OF PHILIPPINE ARMY 103RD INFANTRY BRIGADE

ILIGAN CITY — A military jet dropped four bombs in the mountain ranges straddling Madalum and Madamba towns in Lanao del Sur province on Saturday morning before government soldiers searched the area to confirm reports that remnants of the Maute terror group had been training there.

Col. Jose Maria Cuerpo II, commander of the Army’s 103rd Infantry Brigade (IB), said their combat operations started on Nov. 10, when civilians informed the military that members of the Islamic State (IS)-linked group had been setting up temporary camps in the area.

Cuerpo said several documents had been seized during the combat operation, including the identification card and motorcycle documents of Staff Sgt. Lito Polines, personnel of the Army’s 553rd Engineering Battalion who was shot and killed dead at Barangay Basak Malutlut in Marawi City on Oct. 7.

Along with Polines’ documents, the military also recovered black flaglets with the IS logo, bomb-making materials and improvised explosive devices in the area. These convinced military officials that the group operating in Lanao del Sur could be the remnants of the Dawlah Islamiya Lanao, or the Maute group, which laid siege to Marawi in May 2017 and battled government troops in a war that raged on for five months.

“With the recovery of Polines’ ID in the area, we are suspecting that this group is the same group who killed Polines,” Cuerpo said.

“We cannot penetrate their temporary camps because [these are] located in a strategic high location. We assure that no civilians were hurt during the airstrike because [the target] was around 6 kilometers from the community,” Cuerpo said in a telephone interview.

After the airstrikes on Saturday morning, troops scoured the area to validate reports that several members of the group had been killed. As of Sunday, the military had yet to receive any confirmation on casualties from the operations.

The 103rd IB assured residents in Lanao del Sur and Marawi City that the combat operations against the terror group would be contained in the mountain ranges of the two towns.

“This will not have any effect in the Islamic City of Marawi and Lanao del Sur,” Cuerpo said. “Rather, it will further strengthen the security environment in the province and will ensure that local government offices, businesses, and civil society organizations will [operate] as usual.”