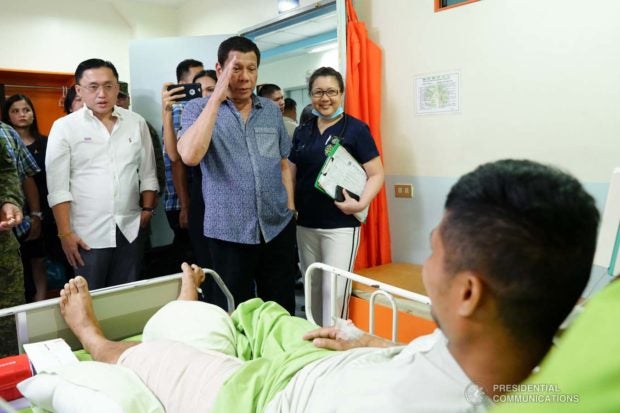 President Duterte salutes one of the wounded soldiers he visited at the Metro Davao Medical and Research Center in Davao City on Sunday, November 24, 2019. (Joey Dalumpines/Presidential Photo)

Duterte visited the soldiers at the Metro Davao Medical Research Center (MDMRC) and conferred them the Order of Lapu-Lapu, Rank of Kampilan.

ADVERTISEMENT
Among those who have received the award was Pfc. Ruel Sumilhig, Pfc. Allan James Cabildo, Cpl. Alexander Flauta, and Pfc. Sonny Buladaco.
The troops sustained injuries in separate clashes against the members of the Bangsamoro Islamic Freedom Fighters (BIFF) and the Dawlah Islamiyah Turaife Group (DITG) in rural parts of Mindanao.
Duterte also extended financial assistance to the soldiers.