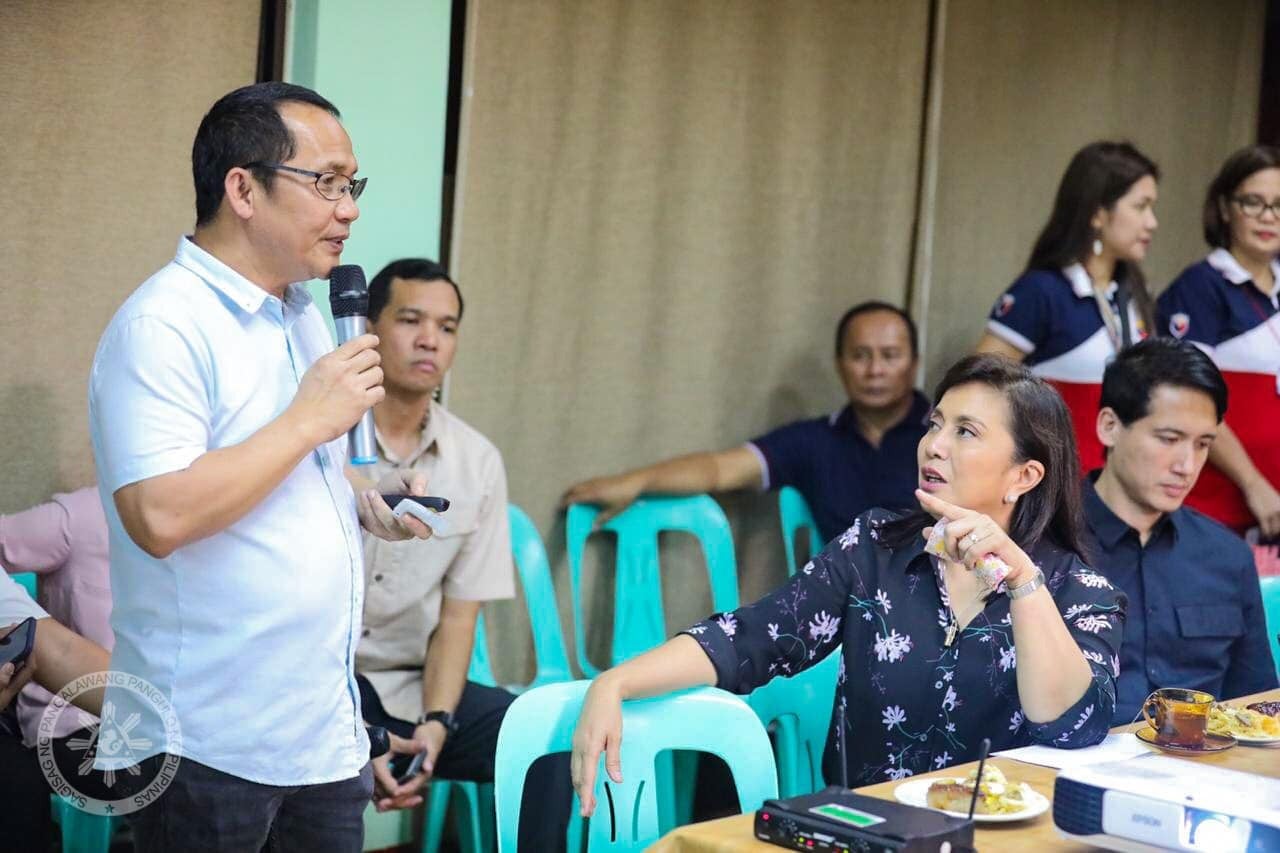 STAYING PUT Vice President Leni Robredo is staying put as cochair of an antidrug body and will pursue the antidrug campaign by treating addiction as a public health problem. In this photo taken on Friday, she is speaking with Barangay Culiat Chair Victor Bernardo in a meeting with Quezon City’s AntiDrug Abuse Advisory Council led by Vice Mayor Gian Sotto (right). —PHOTO FROM OFFICE OF THE VICE PRESIDENT

Vice President Leni Robredo can take the heat from Malacañang and will remain in her post in a government antidrug body, her spokesperson said on Friday.

Barry Gutierrez was responding to a statement by presidential spokesperson Salvador Panelo who suggested that she should resign if she felt uncomfortable as cochair of the Inter-Agency Committee on Anti-Illegal Drugs (Icad).

“[Panelo] can rely on one thing—she will continue to do her job. There are those who are trying their utmost to make her job harder. She certainly won’t abandon her responsibilities to the Filipino people just for them,” Gutierrez said.

“The Vice President does not mind the heat at all. She expected it. She thrives in it,” he said.

Panelo said the decision to accept a position or to resign from it solely rests with the official concerned, not the “appointing power.”

“If one is not comfortable with it, or cannot stand the heat in the kitchen, the honorable thing to do is to leave the post quietly,” he said.

Surprising both the administration and the opposition, Robredo accepted early this month her appointment by President Duterte as Icad cochair alongside Aaron Aquino, chief of the Philippine Drug Enforcement Agency.

Her appointment came after she angered Mr. Duterte with her criticism of his brutal war on drugs, saying in an Oct. 23 interview with Reuters news agency that too many people had been killed but the drug problem had remained prevalent.

Six days later, in a fit of pique, Mr. Duterte dared Robredo to lead the campaign. On Oct. 31, before flying to Thailand for a summit of Southeast Asian leaders, he signed Robredo’s appointment as drug czar.

He had also said she would have a Cabinet seat.

Less than a month into her new job, Robredo had already been sharply criticized by the President who described her early this week as a “grandstanding” “scatterbrain” who could not be trusted as a leader of the opposition with classified information, such as the government list of “high-value targets” in the drug war.

Malacañang earlier said that Mr. Duterte would fire her if she shared “state secrets” with foreign individuals or groups.

The President later clarified that he was not going to fire Robredo but had only decided not to appoint her to the Cabinet because she might “jeopardize the whole situation, including records, classified, which are secrets, state secrets.”

Panelo added his own criticism of Robredo, saying she took “missteps” like consulting “enemies of the state” who had allegedly prejudged Mr. Duterte’s antinarcotics campaign.

Sen. Francis Pangilinan, president of the opposition Liberal Party chaired by Robredo, on Friday said the President should just fire her instead of heaping insults on her.

“If they could not trust the Vice President, she should not have been appointed as Icad cochair,” he said.

“If they do not want [her] as drug czar, nobody is stopping them from removing her from the post. They should stop threatening to sack [her] and to insult her. She will not cling to her post as drug czar,” Pangilinan added.

Robredo herself had said that if the President “does not want me here anymore … he should just say the word.”

“He should be direct with me [if he wants me out]. I’m a straight talker,” Robredo told reporters.

In his statement on Friday, Panelo said it was “unethical,” “disrespectful” and “brusque” of Robredo to “taunt or dare” Mr. Duterte to tell her to quit.

He said “such taunting and daring only make it appear that the President owes her for appointing her as anti-illegal drug czar,” when in fact “it is the other way around.”

“Without her knowing it, she may be displaying her lack of care about the work assigned to her, or she may be showing disrespect to the President,” Panelo said.

“If she is smarting from the remarks of the President of not trusting her to have access to classified information, she has only herself to blame,” he added.

Pangilinan said Malacañang’s statements against Robredo may have been due to her unexpected acceptance of the President’s challenge to her to lead the government’s antinarcotics campaign.

Robredo has said that drug addiction was a health problem and killing drug suspects, who are mostly poor, would not stop the menace.

Citing Barangay Culiat in Quezon City which she visited on Friday as an example of her approach, she said that with accurate data plus cooperation and coordination among local and national agencies and the police it was possible to help rehabilitate drug users.

Robredo stressed that an accurate and centralized drug watch list was key to avoiding any untoward incident in the antidrug drive.

“In Quezon City, the list is clean, because they invested in a system. There is a central database that has biometrics and pictures,” she said.—WITH REPORTS FROM JULIE M. AURELIO AND MARLON RAMOS