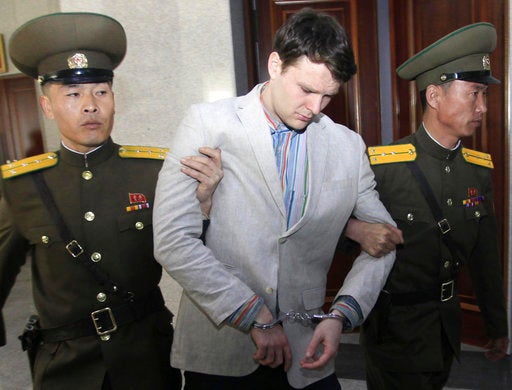 In this March 16, 2016, file photo, American student Otto Warmbier, center, is escorted at the Supreme Court in Pyongyang, North Korea. Warmbier, an American college student who was released by North Korea in a coma last week after almost a year and a half in captivity, died on June 19, 2017. (AP Photo/Jon Chol Jin, File)

SEOUL — The parents of a former U.S. hostage who died after being released from North Korea in a coma in 2017 have said they are committed to finding and shutting down illicit North Korean business assets around the world in efforts to hold its government accountable for widespread human rights abuses.

In a news conference in Seoul on Friday, Fred and Cindy Warmbier called for the Trump administration to raise North Korea’s human rights problems as it engages in negotiations to defuse the country’s nuclear threat.

“My mission would be to hold North Korea responsible, to recover and discover their assets around the world,” said Fred Warmbier, who was invited to a forum hosted by a Seoul-based group representing the families of South Koreans abducted by the North during the 1950-53 Korean War.

“We feel that if you force North Korea to engage the world from a legal standpoint, then they will have to ultimately have a dialogue. They are not going to come and have a dialogue with us any other way,” he said.

The Warmbiers have claimed that their college student son, Otto, was tortured by North Korea after being convicted in 2016 of trying to steal a propaganda poster and imprisoned for months.

The 22-year-old suffered severe brain damage and died shortly after being returned to the United States in a vegetative state in June 2017.

The North denied that it tortured or cruelly treated the University of Virginia student and accused Washington and Seoul of a smear campaign.

In December last year, a U.S. federal judge ordered North Korea to pay more than $500 million in a wrongful death suit filed by the Warmbiers over their son, although they are unlikely to collect on the judgment.

The Warmbiers are also pushing legal action seeking the closure of a hostel operated on the grounds of the North Korean embassy in Berlin and plan to go after other hostels the North operates in Europe.

ADVERTISEMENT
Read Next
Police start crackdown vs vape stores that lack permits
EDITORS' PICK
Get exciting deals and discounts when you download the new McDonald’s App
SM continues to send relief assistance to remote towns in Batangas
Palace: US Senate move also made Duterte junk VFA
Year of metal Rat: ‘Rooster’ Duterte warned of scandals
China expands lockdown against virus, fast-tracks hospital
‘A greener, cleaner tomorrow’: A how-to guide for Filipinos who want to help with today’s energy crisis
MOST READ
No time for revelry; Tagaytay instead plans for alert level 5
Palace: US Senate move also made Duterte junk VFA
Countries with confirmed cases of coronavirus
172 Chinese tourists arrive in Bohol
Don't miss out on the latest news and information.