Singapore eyes use of live-firing facility in India 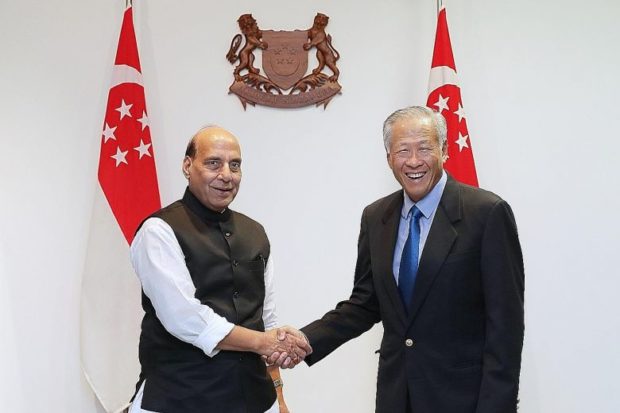 Defence Minister Ng Eng Hen with his Indian counterpart Rajnath Singh at the Ministry of Defence yesterday. Mr Singh said he was confident that both countries will enter a new era of defence partnership. ST PHOTO: GAVIN FOO

SINGAPORE — It is impossible to conduct live firing of missiles like those used in the Spyder ground-based air defense system in Singapore because of the country’s limited size.

But it may be able to do so at the Chandipur Integrated Test Range in India in the future, if a new defense technology cooperation agreement between the two countries comes to fruition.

Yesterday, Defense Minister Ng Eng Hen and his Indian counterpart, Mr Rajnath Singh, witnessed the exchange of a letter of intent on this.

At the end of the 4th India-Singapore Defence Ministers’ Dialogue held at the Ministry of Defence, both sides also agreed that the Singapore-India-Thailand maritime exercise, held for the first time in the Andaman Sea in September, should be held annually from next year.

Speaking to reporters after the meeting, Dr Ng said defence ties between India and Singapore have grown since 2015 when the revised Defence Cooperation Agreement, which established the dialogue between the defense ministers, was signed.

In turn, Mr Singh said: “From our discussions today, I am confident that we will enter a new era of defence partnership in composing both bilateral defence cooperation and defence industry cooperation.”

He said submarine rescue and humanitarian aid and disaster relief emerged as new areas of cooperation which both sides have agreed to pursue.

Mr Singh, who was appointed in May, was on a three-day introductory visit to Singapore that started on Monday. He called on Deputy Prime Minister Heng Swee Keat on Tuesday and also visited Singapore Armed Forces (SAF) units.

Asked about the Chandipur facility, Dr Ng said it would be impossible to fire missiles like the Spyder systems in Singapore as it is a small country. “So we’re very thankful to India for providing that facility. India is a large country with a large land mass, and we understand also that this is a significant gesture on their part. We want to use the facility very productively.”

On the trilateral exercise, Dr Ng said it offered benefits at various levels. At the navy-to-navy level, confidence and inter-operability could be built up, and tactics as well as protocols shared.

It sent an important signal that the Andaman Sea and the Malacca Strait are international straits which commercial and military ships pass through, he said. “It gives confidence to our own militaries as we exercise our duties, as well as to the international shipping communities in other countries which use these vital waterways.”

Responding to the same question on the maritime exercise, Mr Singh said India is seeking to further enhance its participation and engagements in the Indo-Pacific, an important region for his country.

Another letter of intent was exchanged yesterday, reaffirming a mutual commitment to explore deepening humanitarian assistance and disaster relief cooperation in areas such as information sharing and capacity building.

A joint statement by both ministers said Mr Singh also offered the setting-up of joint test facilities under the Defense Testing Infrastructure Scheme of India and Dr Ng agreed to explore opportunities for joint collaboration.

They also agreed to explore cooperation in areas such as artificial intelligence, geospatial data sharing and cyber security.

The first India-Singapore Defense Ministers’ Dialogue was held in Singapore in 2016. It is an annual event and the next one will be held in India.