‘I have arrived’: Transgender women reach new heights as flight attendants in the Philippines 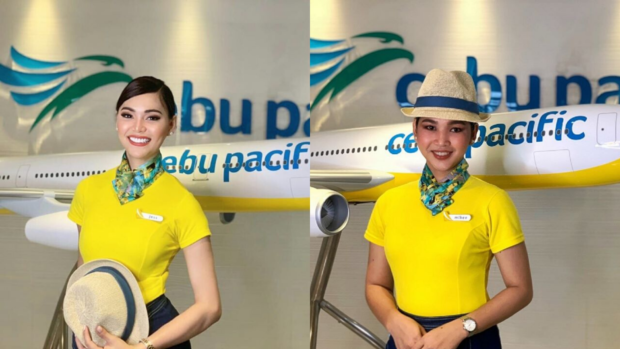 After 57 days of intense training, transgender women Mikee Vitug and Jess Labares have become flight attendants of a budget airline in the Philippines.

Vitug and Labares are part of the cabin crew of low-cost airline Cebgo which is owned by JG Summit, the parent company of Cebu Pacific.

Vitug told INQUIRER.net that to her knowledge, no other trans women besides them have become cabin crew members in the Philippines. Meanwhile, Labares describes herself as “the very first post-op transgender woman flight attendant in the Philippines.”

They revealed that the journey leading to their notable achievement — not only for themselves but also for the transgender community — was not a walk in the park.

The two women each shared how they reached the milestone on their Facebook pages last Monday, Nov. 18.

A challenge and a random idea

Labares revealed that becoming a flight attendant had never been a childhood dream of hers, and instead saw it as a challenge she had to face. She described the program to become part of the cabin crew as “the most difficult training” she has been through.

She also pointed out that the job “may seem glamorous to look at, but what people don’t really see are the battles, both personal and professional, that we face.”

Meanwhile, Vitug, a licensed pharmacist, said that her decision to apply as a flight attendant was a “random idea” because she thought it would be impossible for a transgender woman to become one.

Despite her initial assumption, she continued with the application earlier this June thanks to the urging of her partner. Vitug later learned that she had been accepted into the training program.

The 26-year-old from San Simon, Pampanga, revealed that their training, which lasted from September to November was harder than she expected. She stated that they had an exam every day, prompting her to spend late nights studying.

Aside from the daily exams, they also had to undergo survival swimming, which proved a daunting task for Vitug who admitted to not knowing how to swim at the time. The training consisted of fire and smoke drills as well, where they had to crawl on the cabin floor.

“Paos, bugbog, galos at sugat ang inabot ([A] hoarse voice, bruises, scratches and wounds were the results [of the training]),” she said.

After experiencing the rigorous training, Vitug stressed that the job of the cabin crew is hard because the safety of the passengers is their responsibility.

Becoming a flight attendant is an opportunity Labares will “forever cherish.” She sees her triumph as a sign that the country has “progressed into a more accepting society who has learned to respect and celebrate human individuality and expression.”

“It is another milestone in our country that proves that reputable companies such as Cebu Pacific Air can be diverse and multicultural — and this would have never been possible without their indiscriminate and forward-thinking supervisors, managers, and big bosses,” she said.

Labares, who is also a beauty queen, said that becoming a flight attendant is the “greatest crown” she has received. “Now that I’m officially an airline cabin crew member, I can finally say that ‘I have arrived,'” she said.

As for Vitug, she feels “honored and humbled” to be one of the first known transgender women who is part of a local cabin crew. She hopes that the achievement will “spark a change” in terms of how the public sees transgender women, in that they are just as capable as any other person.

As a trans woman, Vitug told INQUIRER.net that she has not felt outright discrimination towards her. However, in her past job as a pharmacist, Vitug noted that when she started transitioning, she was not allowed by the human resources (HR) department of her employer to follow female grooming standards.

She explained that they did not allow her because her birth certificate still stated that she was a man. “Medyo nahurt ako doon (I was quite hurt by it),” she said.

Despite feeling hurt, Vitug respected the company’s policy and chose to resign from her position.

She revealed that not being allowed to express herself as a woman affected her well-being. Vitug added that it would also trigger her dysphoria at times, making her feel like she was not connected with her physical self if she appeared as a male.

Vitug said she is currently still in the process of transitioning to a female after she started in early 2016.

Vitug also shed light on how companies can make work environments more open to members of the transgender community. She advised them to be “more inclusive and diverse” and to incorporate gender sensitivity seminars.

Addressing transgender men and women who face challenges with finding employment simply because of their gender identity, she said, “Stay strong because that is our only choice so that we can survive, especially in our country. As a minority, we do not have that much recognition and protection from our government.”

“Equip yourself with knowledge as much as you can, stay in school and finish your studies hangga’t may nagpapaaral sa inyo (as long as there is someone putting you through school).”

“If you are a working student, continue striving hard for success and do not mind detractors and focus on improving yourself every day,” she advised.

Vitug and Labares are set to start flying out this week for all domestic destinations of the said airline. NVG