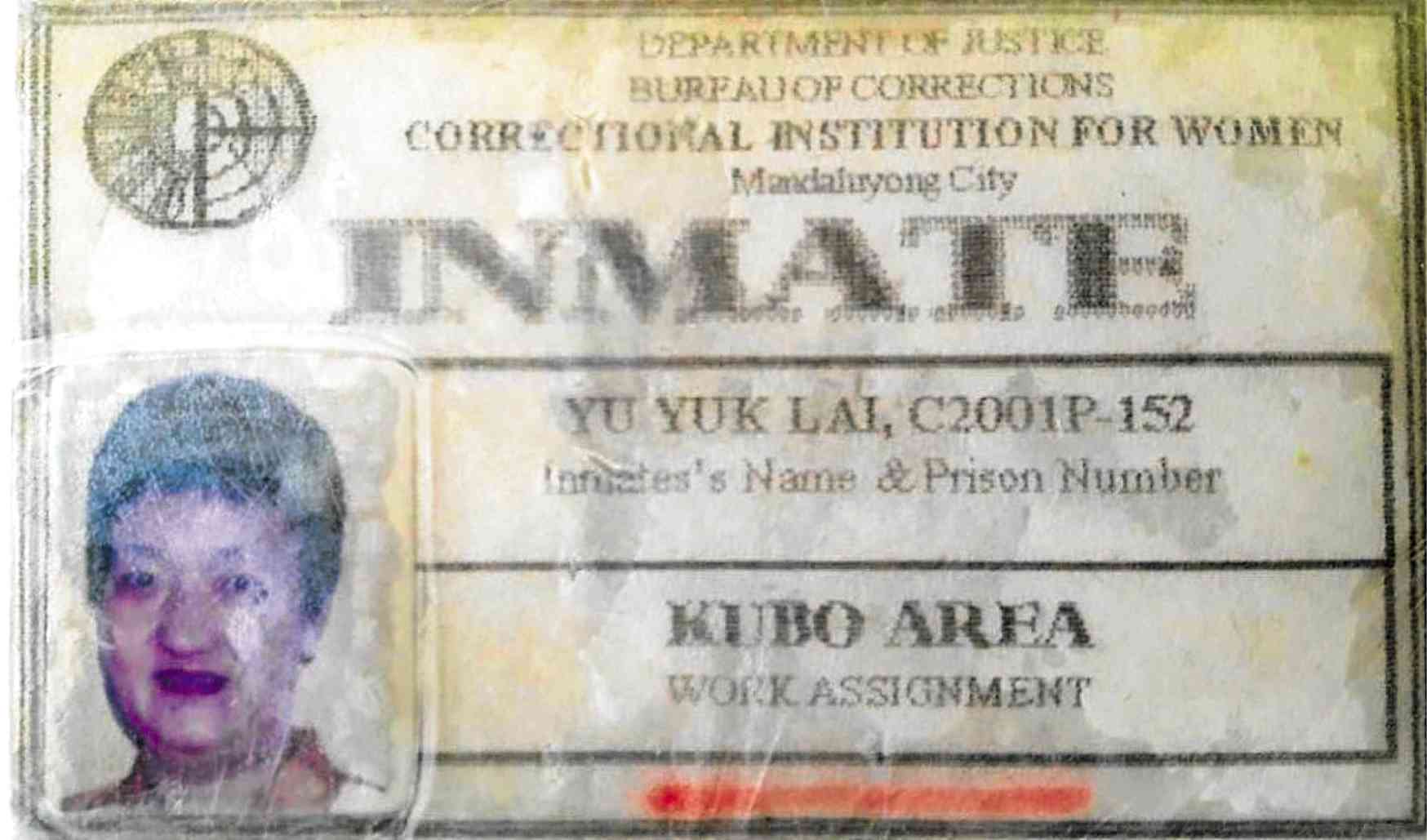 HIGH-PROFILE INMATE Yu Yuk Lai is serving a jail sentence of up to 40 years for drug trafficking at the Correctional Institute
for Women in Mandaluyong City. —PHOTO COURTESY OF PDEA

All 158 personnel of the Correctional Institute for Women (CIW) in Mandaluyong City are under investigation after convicted “drug queen” Yu Yuk Lai claimed that one of them sold her a cell phone a long time ago.

In a phone interview,  Bautista said Yu had claimed a CIW corrections officer sold her the phone for P5,000, on top of a daily fee of P200 for the privilege to use it.

Yu, who is detained at the maximum security facility, did not identify the prison officer, only saying that the phone had been with her for “a very long time (matagal na).”

Bautista said she ordered an investigation of all 158 CIW personnel, adding: “If they are found to be in cahoots with prisoners or involved in corrupt practices, we will file appropriate charges against them which may lead to their relief or [reassignment to a far-off penal colony] at the very least, or worst, in their dismissal.”

According to Bautista, Yu surrendered her phone for fear of losing her prison privileges.

“Prior to the surrender, I told [the over] 3,000 PDLs (persons deprived of liberty) to voluntarily surrender all the contraband they were hiding. Or else, if we find any contraband during (a surprise inspection), I will cancel all the privileges of inmates in that dormitory,” Bautista said.

Upon her assumption to office on Nov. 11, Bautista increased the number of visiting days from 5 to 6 and allowed inmates to make 5-minute daily “regulated” phone calls to their families and loved ones.

“Once you show the inmates that their rights are being respected in prison, they will be more than willing to follow orders,” she said.

After Yu gave up her phone, several inmates also surrendered phones, knives, forks and other contraband.

In September 2001, Yu, a Chinese-Filipino, was convicted for drug trafficking and sentenced to up to 40 years in prison. She was arrested in 1998 while delivering 3 kilos of “shabu” to an undercover agent in exchange for P2 million worth of casino chips.