MANILA, Philippines – Before the Senate approved the 2020 budget of the Philippine Sports Commission (PSC) on Tuesday, November 19, Senator Christopher “Bong” Go and Speaker Alan Peter Cayetano took the opportunity to clear pressing issues related to the hosting of this year’s Southeast Asian Games.

Go said that he will not tolerate corruption in the handling of the 30th Southeast Asian Games, which the Philippines is hosting from November 30 to December 11. 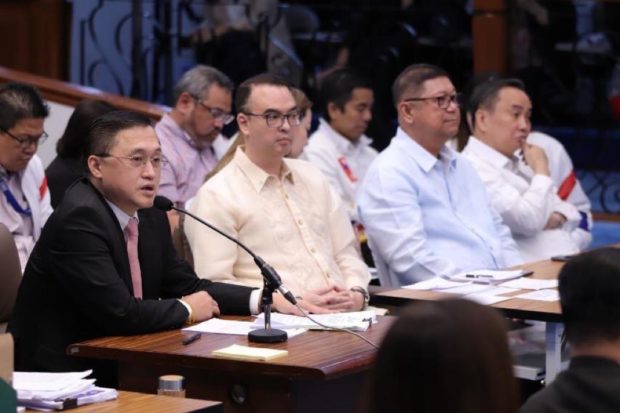 Cayetano, as chair of the PHISGOC, was given the chance to answer questions related to the organizing committee after the Senate suspended its rules so that resource persons may speak in the plenary.

Go earlier argued that he cannot respond on behalf of PHISGOC since it is not within the scope of his mandate as sponsor of the proposed PSC budget for 2020.

To address the concerns of fellow senators, however, Bong Go suggested that it would be proper to address the questions directly to the organizing committee for the purpose of upholding transparency and accountability to the public.

“If my colleagues in this chamber insist on asking questions beyond the scope of the PSC budget, then, I think, it would be more prudent to hear answers straight from the horses’ mouth. I, too, want to get to the bottom of things based on the rules and in order not to prolong the discussions here at the expense of the budgets of the PSC and other agencies scheduled today,” Bong Go said.

“The PHISGOC, as the organizing committee, is in a better position to give accurate information regarding its involvement in the preparation for the Games,” he added.

Among other issues, Cayetano addressed the questions of Senate Minority Leader Franklin Drilon regarding the cost of the New Clark City Sports Complex.

“Are we spending a lot of money? Yes. Is it excessive? No. Is it overpriced? No,” Cayetano said as he defended how funds are being spent properly for what is projected to be the biggest SEA Games organized by a host country so far in the Games’ entire 40-year history.

Organizers estimated a billion viewers worldwide for the entire duration.

“A multi-sport event like this is a matter of national pride. It focuses on our people, it focuses on our culture, it benefits us in tourism, foreign investments. Sports tourism alone is $620-billion industry which we want to tap into,” Cayetano said.

Drilon commented that he never said that the sports complex was “overpriced.”

Cayetano added, “Malaysia spent 7 billion on hosting alone, 15 billion in sports development and 1.5 billion to upgrade the facilities. Our SEA Games will be the biggest in history. The most number of sports. We expect a billion viewers.”

He also explained why the cauldron, which Drilon critiqued in interviews, costs P50 million.

“The cauldron that has been put in the spotlight is cheaper than what was built by Singapore four years ago, 63 million. Ang ‘yung sa Singapore po ay hindi National Artist (ang nag-design).”

“The cauldron is the symbol, not one of the symbols. It is the symbol of the Games, whether it’s the Olympic Games or SEA Games. It is a work of art. While some people may see a cauldron, we see a monument, we see the athletes, we see the burning flames that represent hope and the fighting spirit.”

As to Drilon’s question why PHISGOC, a foundation, is the main organizer of the SEA Games instead of a government agency, Cayetano explained that it is in accordance with the rules and common practice in organizing such international sporting events.

“It is the SEA Games Federation that owns the Games, and all the Games are ran by foundations. In the IOC rules and the SEA Games Federation rules, it is either the Olympic Committee, but they will form the foundation that will be the organizing committee, or it could a multi-stakeholder,” he said, explaining that PHISGOC abides by the multi-stakeholder approach wherein the PSC and the Philippine Olympic Committee (POC) are also involved.

“We had no choice. If we don’t want a foundation, we cannot host the Games,” he further emphasized.

Senator Pia Cayetano, for her part, expressed her affirmation to the construction of the New Clark City Sports Complex because its world-class facilities will allow the Philippines to host qualifying sports events, saving Filipino athletes from having to go abroad just to train and qualify for international sports events.

Senator Francis Tolentino and  Migs Zubiri congratulated PHISGOC, POC and PSC on their efforts to support Filipino athletes and in their preparations for the SEA Games.

Go also stressed during the hearing that an audit of all transactions done in the hosting of the SEA Games will be conducted at the proper time to ensure that no funds are wasted.

He further said that these pressing issues are being clarified now to uphold transparency and accountability in order for the country to be united in rallying support for our athletes.

“There is a right time for everything…  these questions pertaining to the organizing of the 2019 SEA Games are being answered now for the benefit of the public,” Go said.

“This should be the time for us, leaders of this country, to unite with our fellow Filipinos and rally behind our athletes. While we are here debating, we have athletes, trainers, game organizers, and thousands of volunteers sacrificing their time to bring glory to the Philippines. They are doing this for the country.”

Go also emphasized that all Filipinos must focus now on supporting athletes who are working hard to bring pride to the country.

“Sama sama tayo na itaas ang bandila ng Pilipinas. We work as one in order to win as one! One team, one goal, go for the gold!,” he reiterated in past statements.

After the issues were clarified, Zubiri moved that the PSC’s P672-million budget be deemed submitted and approved.