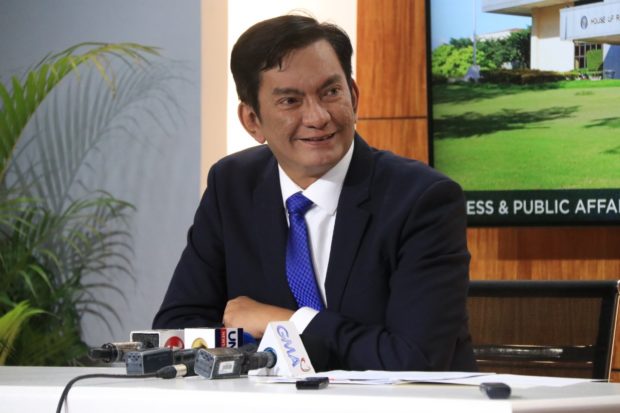 MANILA, Philippines — The House of Representatives will remove vaping products or electronic cigarettes (e-cigarettes) from the bill imposing increased tax rates on liquor and heated tobacco.

This is after President Rodrigo Duterte banned the use and importation of e-cigarettes in the country.

House ways and means committee chairperson Joey Salceda on Wednesday said that the vaping products would be removed under the “sin tax” bill during the bicameral conference committee (bicam) between the House and the Senate.

(We will follow the President’s ban, so during the bicam, we will remove vaping products on the bill. The DOH will be in charge in managing that.)

“Virtually, ang gagawin namin doon, all taxes in vape will also be removed pati na yung existing, kasi may existing tax on vape diba, aalisin din namin yun so we don’t recognize vape anymore as a product that is being taxed,” he added.

(We will remove all taxes on vape, including the existing ones. We don’t recognize vape anymore as a product being taxed.)

He assured that the implementation of the Universal Health Care (UHC) law will not be affected by the exclusion of the vape products under the “sin tax,” whose projected revenue was about P1.4 billion.

“I think we can still proceed. That means the onus will now be on fermented products and distilled spirits. We can make up for it in the other tax, other components of the sin tax measures,” the Albay representative said.

“I don’t think we will allow the UHC to be jeopardized by the ban, in fact, it could be helpful if DOH could implement the ban on vapes,” he added.

Prior to Duterte’s ban, the House approved on third and final reading a bill that will gradually increase excise tax rates on liquor and heated tobacco and vapor products.

The President has also certified as urgent the Senate version of the measure, Senate Bill No. 1074.

Once the Senate approves the measure on third reading, both chambers of Congress will convene a bicam to reconcile disagreeing provisions of the bill.

The President’s ban on vaping products came after the DOH reported the first case of vape-related lung injury.

The patient was a 16-year-old girl from Central Visayas who had been using e-cigarette daily for four months since March. She then started smoking both the device and traditional cigarettes until she was hospitalized on Oct. 21.