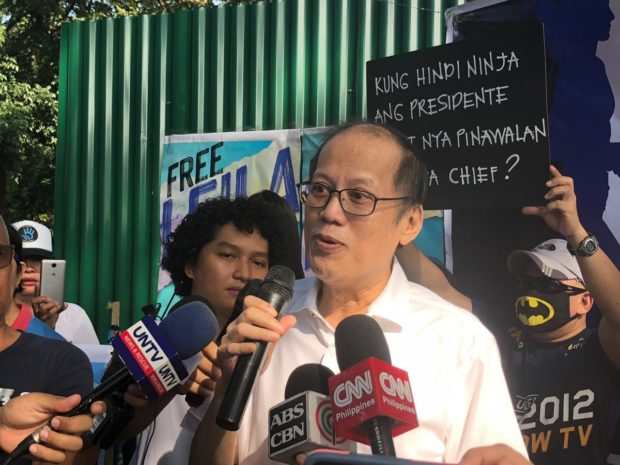 Former President Benigno S. Aquino III talks to members of the media on the sidelines of an indignation run for the 1,000th day of “unjust detention” of his justice secretary, Senator Leila de Lima, on Wednesday, November 20, 2019, in Quezon City. Darryl John Esguerra/INQUIRER.net

Aquino, who appeared to have lost some pounds, made this revelation after the Mass for the 1,000th day of  “unjust” detention of his former justice secretary, Senator Leila De Lima.

The former chief executive said he was diagnosed with pneumonia last week.

(It started with a cough. But the problem is it progressed into pneumonia, that was last week. So, my doctors gave me a treatment, so I’m now okay. But of course, we’re still recovering and we didn’t want to suffer from relapse.)

Aquino explained that his doctors gave him two sets of medication, which caused him to lose appetite.

(They gave me two kinds of medication. I lost appetite but while you’re losing your appetite you are still required to eat some before taking the antibiotics.)

In August, the former President’s youngest sister, Kris, said her brother was not able to attend their father’s 36th death anniversary because he was “not okay”, causing people to speculate on his condition.

“I was told to not give many details. Actually, I was told to say: ‘Sabihin mo na lang hindi [ako] sumipot dahil nandito ka,” Kris reportedly said. (Just tell them I did not show up because you are here.)

“But I want you to know the truth and with me, you get the truth. So, he’s not okay. I’m not at liberty to say what’s wrong with him because that’s up to him,” she added.

But Aquino’s spokesperson Abigail Valte was quick to dispel the conjectures and said his boss was just “down with flu” during that time.

Asked what’s keeping him busy these days, Aquino said he’s been trying to keep up with “all the developments happening here in the country” including occurrences abroad that may affect the country like the situation in the Middle East, the US-China trade war, and the ongoing impeachment against US President Donald Trump.