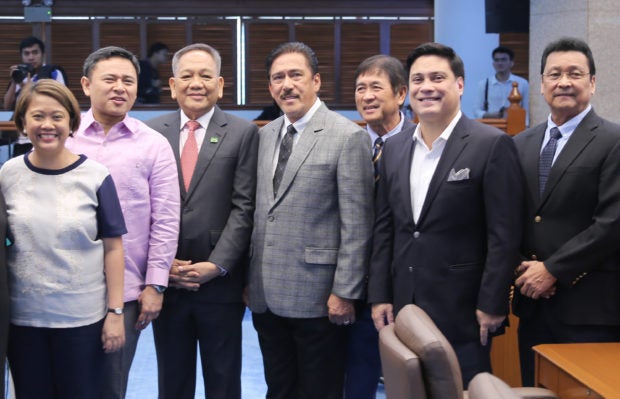 Senate President Vicente C. Sotto III (4th from left) and Supreme Court Chief Justice Diosdado Peralta (3rd from left) is joined by other senators for a photo opportunity after the Judiciary’s P40.17 B proposed budget for 2020 was submitted for the Senate’s consideration and approval Wednesday, November 20, 2019. PRIB Photo

MANILA, Philippines — It only took less than a minute for the Senate to approve the proposed P40.17 billion budget of the judiciary for 2020.

Not a single question was raised when finance committee chair Senator Sonny Angara presented the judiciary’s budget on Wednesday.

Before the presentation of the budget, Senate President Vicente Sotto III welcomed Chief Justice Diosdado Peralta, who he said he did expect to personally appear at the Senate.

“We’d like to welcome the Chief Justice of the Supreme Court here in the premises,” Sotto said.

“He has been representing the Judiciary every year, so I did not expect him to be here because he is already the Chief Justice now, but he’s still here,” he added.

The Judiciary’s budget funds the Supreme Court and the lower courts, the Presidential Electoral Tribunal, the Sandiganbayan, the Court of Appeals and the Court of Tax Appeals.

Senate Majority Leader Juan Miguel Zubiri manifested that no senator expressed intent to interpellate the budget of the Judiciary.

He then moved for that the said budget be deemed submitted and approved.

Peralta, in an interview with reporters after the plenary deliberation, said he has been attending budget hearings since 2012 when he was still with the Sandiganbayan.

The proposed budget of the judiciary for 2020 received an additional P2.5 billion.

The funding for the Supreme Court and lower courts increased by P1.526 billion while the budget for the Presidential Electoral Tribunal increased by P13.048 million.

The Sandiganbayan got an additional  P577.154 million, the budget for the Court of Appeals increased by P288.64 million while P114.47 million was added to the budget of the Court of Tax Appeals.