newsinfo / World
World
DESERT NATION ALL PRAISE FOR THE ALABAI 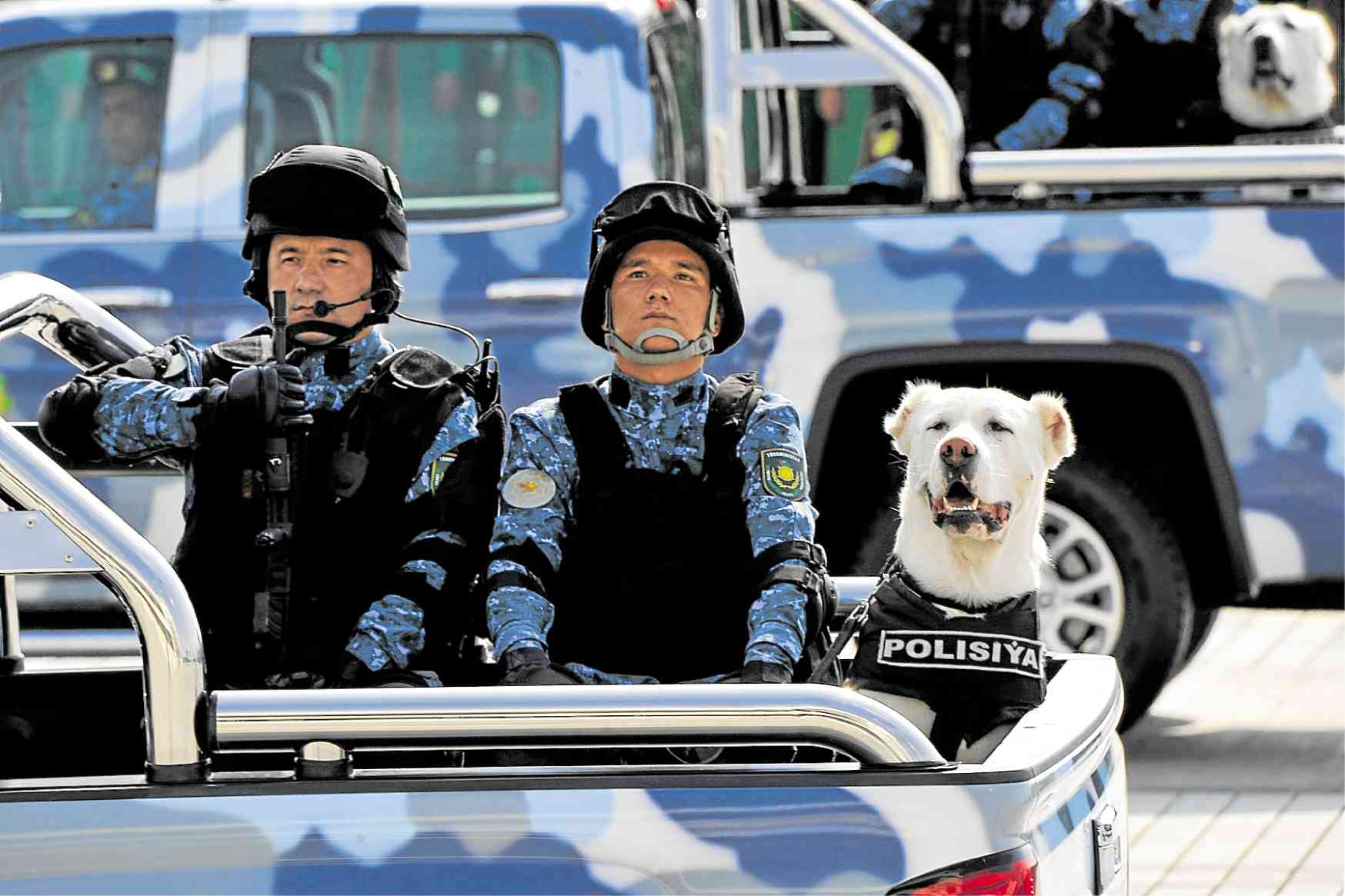 POOCH OF PRIDE An alabai shepherd dog finds its rightful place in a military parade in the Turkmenistan capital of Ashgabat on Sept. 27. —AFP

ASHGABAT, TURKMENISTAN —A gift for foreign leaders, a subject of presidential poetry, and the inspiration for a new statue in the capital, the alabai shepherd dog’s stock has never been higher in horse-loving Turkmenistan.

For as long as anyone can remember or 4,000 years, according to strongman President Gurbanguly Berdymukhamedov, this barrel-chested, large-skulled breed has been at the side of nomads and their flocks in the mostly desert country.

Outside Turkmenistan, the dog that reaches up to 85 centimeters (33 inches) in height and has a tough, wiry coat is known as a sub-breed of the Central Asian shepherd dog.

But in the former Soviet state, the dog is listed as national heritage and its status is growing every day, thanks to Berdymukhamedov, who is using the alabai to help foster a sense of national pride.

In a tome on the alabai published this year, Berdymukhamedov wrote that Turkmen ancestors “saw in the horse our dreams and in the alabai our happiness.”

In September, he presented Cabinet members with a poem about the dog as a “symbol of achievement and victory” that has since been converted into song.

And earlier this month, he unveiled a plan to build a statue to the dog potentially as high as 15 meters (50 feet) in the capital Ashgabat. This was an honor previously only accorded to horses, including one with Berdymukhamedov depicted in the saddle.

According to long-term watchers of the isolated authoritarian country, Berdymukhamedov’s frequent appearances on state media with alabai are more than just a personal quirk.

Like the Akhal-Teke horse, a national breed reputed for its grace and beauty, the alabai “assists the state in solidifying the idea of the territory of Turkmenistan as firmly Turkmen,” said Victoria Clement, a historian and author of the book “Learning to Become Turkmen.”

While alabai are commonly kept as house pets in Ashgabat, it is the rural half of Turkmenistan’s 5.5 million population that has the deepest connection with the dogs, which are also used by border patrols and police.

Ashir-aga Ishanov, 73, was frightened of the alabai as a child until his shepherd grandfather reassured him it would never harm a human. 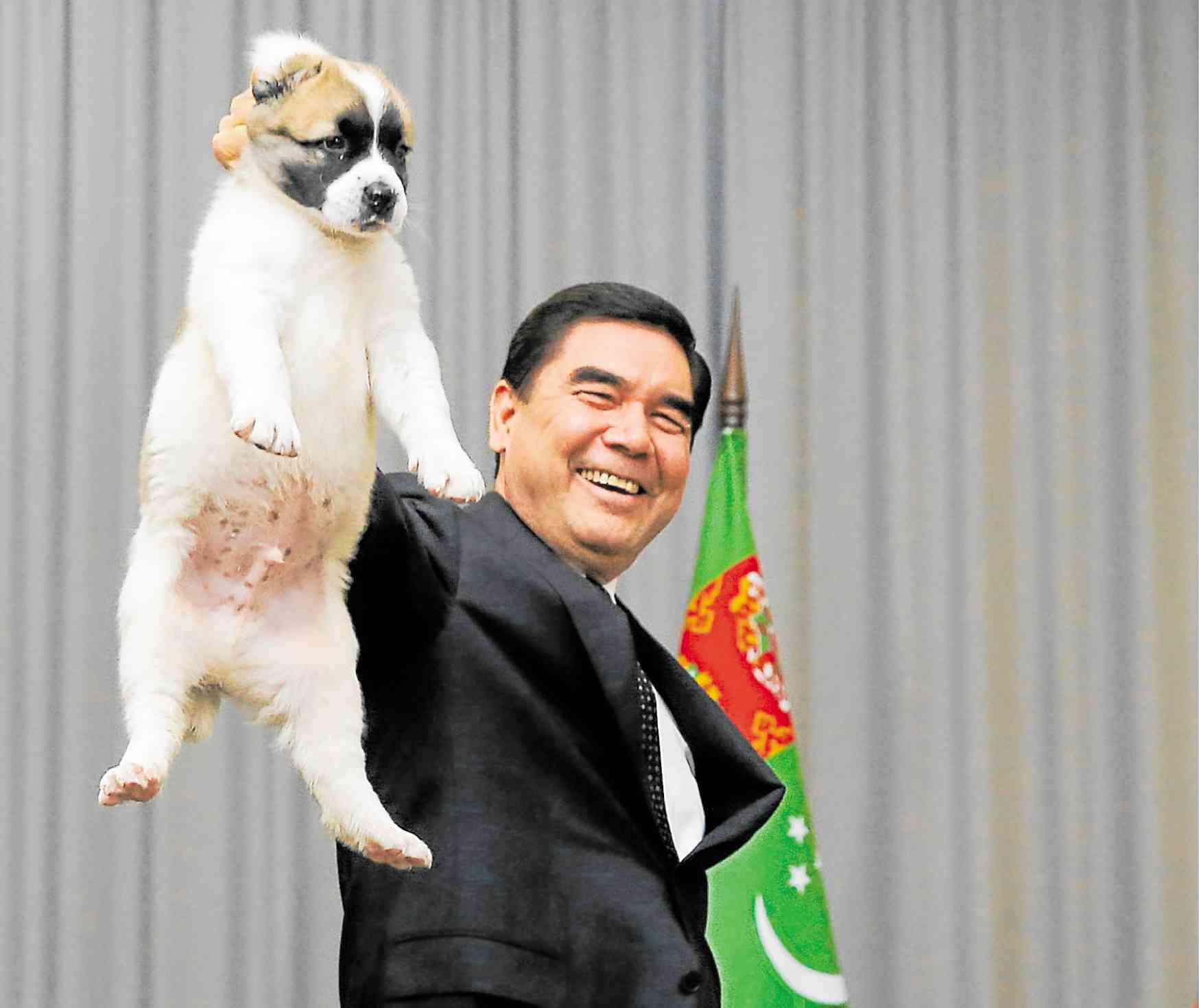 One night when their desert camp was surrounded by a pack of howling wolves, he witnessed the combative qualities of the dog up close.

“My grandfather and I jumped out of the yurt and saw a wolf grab a sheep,” Ishanov, who now lives in Ashgabat, told Agence France-Presse (AFP).

Ishanov’s alabai rushed after the wolf and took a chunk out of its neck, causing the pack to retreat in fear.

“I was overcome by the courage of our dog,” Ishanov said, his voice straining with emotion.

Attempts to export the alabai are criminally punishable. A Kazakh ambassador’s effort to smuggle a dog out of the country in 2005 caused a diplomatic scandal.

But some lucky foreigners have received the dogs as gifts. Berdymukhamedov handed Russian President Vladimir Putin an alabai puppy by the scruff of its neck as a 65th birthday present in 2017.

Perhaps the alabai’s proudest moment was being chosen over its equine rival as the mascot of the Asian Indoor and Martial Arts Games, a tournament that Turkmenistan hosted with great pomp in 2017.

The alabai is trained to fight from a young age and breeders clip the dogs’ ears and cut their tails down to stumps in preparation for battle.

But unlike stray dogs, which animal rights groups have criticized Turkmen authorities for routinely rounding up and shooting, cultural norms protect the alabai from death or serious injury in the fights.

The battles are stopped “when one of the dogs shows fear,” said Dovlet Kurikov, who served for more than a decade as head of Turkmenistan’s leading alabai association before retiring in 2016.

During a tour of kennels at his home, Kurikov pointed proudly to a 100-kilogram (220-pound) dog called Gaplan, or “Tiger,” which won Turkmenistan’s national alabai fight championship in 2018.

Such champions can fetch more than $25,000, Kurikov said, not that he has any intention of selling.

“If my child is ill, I ask my wife to call a doctor,” Kurikov said. “If my dog is ill, I will sit with it day and night, and not eat until my dog begins to eat.”—AFP