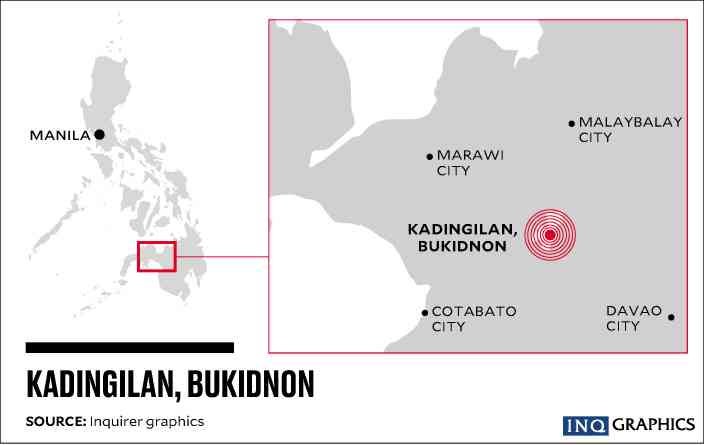 DAVAO CITY—AT least nine people were hurt while more than 100 houses were damaged after a 5.9-magnitude earthquake jolted the town of Kadingilan in Bukidnon province on Monday night, reports from disaster response agencies said on Tuesday.

The Philippine Institute of Volcanology and Seismology (Phivolcs) said the earthquake struck 8 kilometers northwest of Kadingilan at 9:22 p.m.

Ground shaking was felt at Intensity 6 in the towns of Kadingilan, Kalilangan, Don Carlos, Maramag, Kitaotao and San Fernando, all in Bukidnon. Residents in Damulog, Talakag and Valencia City in Bukidnon; Midsayap and Kidapawan City in Cotabato province; and Marawi City in Lanao del Sur province, felt the earthquake at Intensity 5.

Phivolcs said Intensity 4 was felt in the cities of Davao, Cagayan de Oro, Cotabato and Koronadal, and in Malungon town, Sarangani, while Intensity 3 was recorded in Gingoog City, Tupi in South Cotabato, Alabel in Sarangani, and Iligan City.

At least 46 aftershocks had been recorded by Phivolcs in Kadingilan as of Tuesday noon.

About 18 hours after the Bukidnon quake, a moderate 4.2-magnitude earthquake jolted Davao Oriental province at 3 p.m. on Tuesday.

The Phivolcs said the tremor struck 9 km northwest off Lupon town, with a depth of 32 km. Ground shaking was felt at Intensity 3 in Davao City.

Classes have been suspended in Kadingilan and Maramag towns while engineers from the local government and the Department of Education inspect damaged school buildings and classrooms.

Reports from the Kadingilan Municipal Disaster Risk Reduction and Management Office (MDRRMO) said Andresa Polon, a resident of Barangay Matampay, was taken to a local hospital after suffering head injury. At least three others were provided medical attention after fainting and experiencing severe anxiety, the MDRRMO report said

It said at least 102 houses in six villages were reported to have varying degrees of damage.

Many families in Kadingilan on Monday night slept outside of their damaged houses for fear of aftershocks.

Many of them returned home on Tuesday, but others pitched tents in their property to ensure their safety should another earthquake strike.

Six school buildings in Kadingilan were also damaged, with inspectors noting cracks on walls, beams and columns. The ceiling in a building of San Andres National High School collapsed.

A rapid assessment done by firemen, policemen and soldiers found that nine classrooms in the town’s six schools were unsafe for occupancy.

The health center of Barangay Kibogtok, the building housing the Kadingilan municipal health office, the bus terminal in Barangay Cabadiangan, and a private building in Barangay Poblacion had major cracks, inspectors said.

Also among structures damaged in Kadingilan were the police station, the San Isidro parish church and the town hall.

In Maramag town, members of 80 families refused to sleep in their damaged houses in Barangay Campo Uno on Monday night and stayed at the village’s covered court. They returned home on Tuesday after inspectors assured that their houses were safe for occupancy.

The Maramag MDRRMO said five residents were injured after they were hit by falling debris. They were Emilda Acma, 53; Louella Guarin, 54; Christian Tagaylo, 34; Aiza Abilay, 32; and Ronna Mae Cainglet, 45.

Patients in hospitals in Valencia City were evacuated at the height of the quake.

Inspectors said the quake damaged classrooms in two elementary schools and the administration building of another school.