The man who saved Lanzarote from overdevelopment 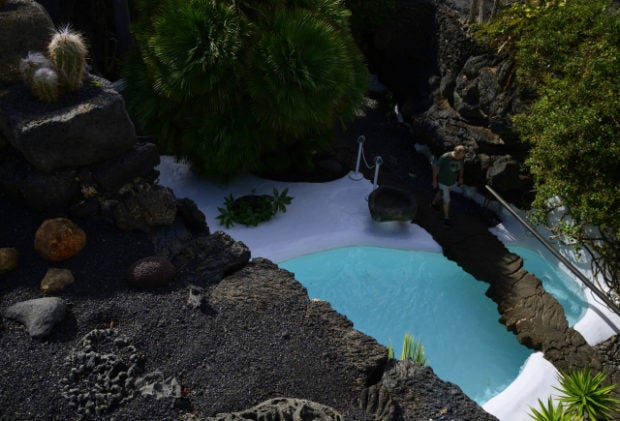 View of the swimming pool in the house of Spanish artist and architect Cesar Manrique in Tahiche, on the island of Lanzarote in the Canary Islands, on October 21, 2019. Image: PIERRE-PHILIPPE MARCOU/AFP

Roadside billboards and high-rise hotels are banned on Spain’s holiday island of Lanzarote — a legacy of visionary artist Cesar Manrique, whose birth a century ago is being celebrated this year.

Part of the volcanic Canary Islands, a Spanish archipelago located in the Atlantic Ocean off the northwestern coast of Africa, the arid island welcomes some three million tourists a year.

But, thanks to Manrique’s influence, it has avoided the same fate as the concrete jungles of the Costa del Sol on mainland Spain.

While there has been a large amount of construction, dwellings on Lanzarote, home to around 150,000 people, largely retain a minimalist simplicity.

They are whitewashed with green or blue woodwork, in keeping with local tradition.

After working in New York as a painter and sculptor, Manrique returned in 1966 to his native Lanzarote, where he built a series of original buildings that merged with the island’s unique landscape and have become part of its attraction.

He also worked closely with the local government on regulations that protected Lanzarote from the ravages of rampant development and encouraged sustainable tourism.

The efforts to preserve Lanzarote’s natural heritage were acknowledged by UNESCO, which designated the island as a World Biosphere Reserve in 1993 — a year after Manrique died in a car accident aged 72.

“I always intended to return, because I knew that on my island there are a series of landscapes that are not normal,” Manrique once said.

To mark the centenary of his birth, Spain’s King Felipe VI inaugurated last month a major retrospective of Manrique’s works at the Caesar Manrique Foundation in the artist’s former home in the town of Tahiche.

The building, built on a lava outflow, uses the lower level of a natural formation of five volcanic bubbles to create a liveable space.

Using dynamite, Manrique opened pathways connecting the five bubbles, which were then converted into rooms with whitewashed walls.

The upper level has sweeping views of Lanzarote’s petrified lava streams and volcanos.

“The relationship between art and nature is Manrique’s genetic axis,” the foundation’s director, Fernando Gomez Aguilera, told AFP, adding that for the late artist, “luxury comes from nature”.

Highly sociable and hedonistic, as a child Manrique liked to draw in the sand on the beach and had the “gift of noticing everything”, his brother Carlos, 94, told AFP.

After moving back to Lanzarote, Manrique quickly formed a bond with Pepin Ramirez, the head of the island’s local government at the time and his childhood friend.

Ramirez provided Manrique with technicians and workers for him to realize his unique building projects, and prioritized the artist’s vision for the island over developing infrastructure.

“It was a political bet; he reversed the order and they won the bet,” said Gomez Aguilera.

Perhaps his greatest project is the Jameos del Agua cave — a lava tube where he created a natural auditorium, swimming pool and restaurant with views over a small lake that is home to a species of blind albino crab found only in Lanzarote.

Another famous work is the cliffside El Rio Viewpoint and restaurant views of the neighboring island of La Graciosa which, like his other buildings, is harmoniously integrated with the natural environment.

“He would go to villages, talk to farmers, and tell them: ‘Your house is beautiful, take care of it, don’t let it crumble, it is good architecture,” said Tonin Ramos, an electrician who worked with Manrique.

‘Would be a disaster’

Marcial Martin, a former director of a network of cultural centers set up by Manrique, said “people are still aware that their home, their surroundings, must be cared for… that environmental awareness is still in force.”

Manrique started developing his projects just as Lanzarote began to develop its tourism sector, which now dominates its economy after centuries of relying on subsistence farming and fishing.

“He sensed that if the island was not controlled, its growth and development would be a disaster,” said musician and painter Ildefonso Aguilar, 74, who worked with Manrique.

While no “original works” have been built on Lanzarote since Manrique’s death, and there is a “standardization” of building styles in tourist centers, the late artist’s vision for the island has been respected, Marcial Martin said.

“It is a very fragile territory, if you break it even just a little, it is really hard, if not impossible, to restore it. We have to take care of it,” he said. NVG

How to be a good traveler in the age of overtourism