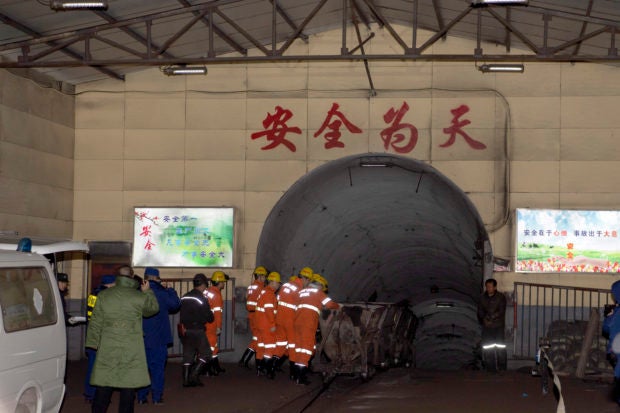 In this photo released by China’s Xinhua News Agency, rescuers enter a coal mine that was the site of a gas explosion in Pingyao county in northern China’s Shanxi Province, Tuesday, November 19, 2019. Authorities in northern China say more than a dozen people were killed and others injured in a gas explosion inside a coal mine on Monday afternoon. (Yang Chenguang/Xinhua via AP)

Nine other people were injured by the gas explosion on Monday afternoon, which took place in a mine owned by Shanxi Pingyao Fengyan Coal & Coke Group Co, according to official news agency Xinhua.

Xinhua reported that 35 miners were working underground when the blast happened, but 11 miners were able to escape.

The injured miners were in a stable condition, Xinhua said.

Shen Xuping, an official at the Shanxi Administration of Coal Mine Safety, said Tuesday that the accident revealed a “lack of awareness of the rule of law and chaotic management” by the company involved, local media reported.

Shen said the accident was caused by activity that “broke the law and regulations,” although authorities are still investigating the exact cause.

Deadly mining accidents are common in China, where the industry has a poor safety record.

In December 2018, seven miners were killed in southwestern Chongqing municipality after the connecting segment of a mining skip broke and fell down a mine shaft.

In October the same year, 21 miners died in eastern Shandong province after pressure inside a mine caused rocks to fracture and break, blocking the tunnel and trapping the workers.

Only one miner was rescued alive.

In December 2016, explosions in two separate coal mines in the Inner Mongolia region and in northeastern Heilongjiang province killed at least 59 people.

Read Next
NCRPO to study how to address vandalism cases in Manila
EDITORS' PICK
Smart sweeps Opensignal’s Mobile Experience awards in Cebu
EuroMillions Superdraw: A lottery draw unlike any other is coming to the Philippines
MRT-3 eyes reducing number of trains after 127 personnel get infected
DOH: Remdesivir shows ‘positive effects’ on COVID-19 patients but not conclusive
Smart releases Hyun Bin’s second TVC
Over 15,000 prisoners freed to decongest BJMP jails amid pandemic—DILG
MOST READ
Army: Soldiers, not cops, in CCTV footage in aftermath of Sulu incident
Lawmakers hit ‘very unfair’ NTC orders vs ABS-CBN
Army loses track of 2 Jolo bombers after agents’ slay
Palace defines 4 years of Duterte administration: ‘It’s been great’
Don't miss out on the latest news and information.