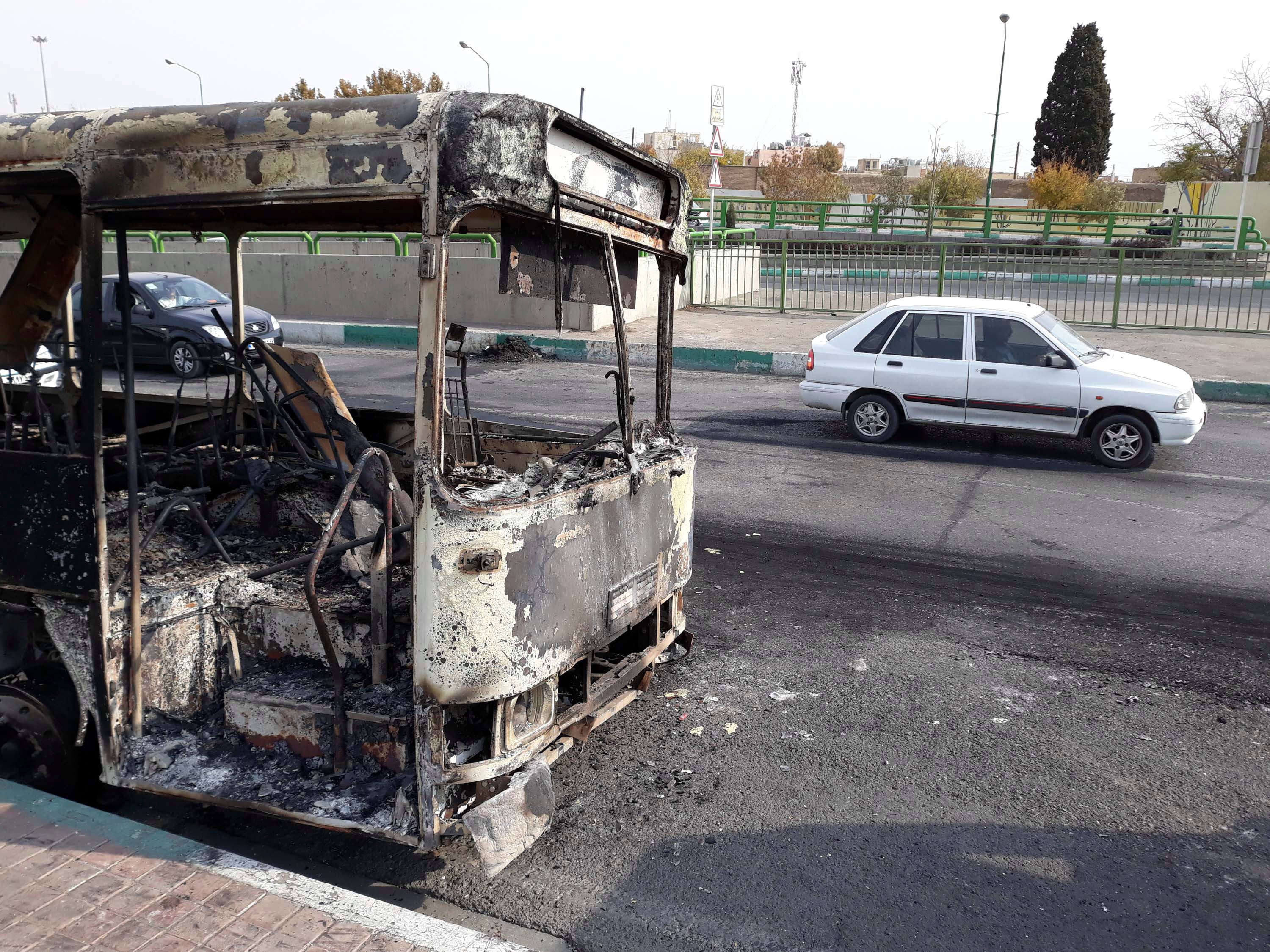 This photo released by the Iranian Students’ News Agency, ISNA, shows cars drive past a scorched public bus that remained on the street after protests that followed authorities’ decision to raise gasoline prices, in Tehran, Iran, Sunday, Nov. 17, 2019. Ayatollah Ali Khamenei, Iran’s supreme leader, on Sunday backed the government’s decision to raise gasoline prices and called angry protesters who have been setting fire to public property over the hike “thugs,” signaling a potential crackdown on the demonstrations. (Morteza Zangane/ISNA via AP)

DUBAI, United Arab Emirates  — Iran on Monday alternatively downplayed and demonized ongoing protests across the country that have killed at least five people and renewed pressure on the government as the country struggles under the weight of U.S. economic sanctions.

The full scale of the protests, which began shortly after a 50% increase in gas prices took effect early Friday, was unknown after Tehran shut down the internet over the weekend, blocking Iranians from sharing videos and information with the outside world. Before the shutdown, late Saturday, some of the protest videos circulating online included sound of gunfire and appeared to show gravely wounded people.

State media and authorities have released little information and a government spokesman predicted during a news conference that the unrest would be over in two days. But the spokesman, Ali Rabiei, also said demonstrators had taken police officers and security forces hostage. He did not release any details.

The protests were prompted by widespread anger among the Iranian people, who have seen their savings evaporate amid scarce jobs and the collapse of the national currency, the rial, since President Donald Trump unilaterally withdrew America from the nuclear deal over a year ago and imposed sanctions. The rial now trades at over 123,000 to $1, compared to 32,000 to $1 at the time the deal took effect.

Tehran’s streets were emptier than usual Monday in what is a generally busy capital on a cold and rainy November day. Shops saw few customers as uniformed police and plainclothes security forces walked the streets. The all-volunteer force of Iran’s paramilitary Revolutionary Guard, known as Basij, said it was helping maintain security.

“Today the situation was calmer — more than 80% compared to yesterday,” the spokesman said. “Only some minor problems remain, and by tomorrow and the day after, there will remain no special riots.”

The head of the Basij, Gen. Gholamreza Soleimani, said protest leaders had been arrested, but he did not elaborate.

“The security forces have dealt with the protesters by practicing restraint and patience,” the general said. “Destruction and disturbances have been done by rioters that we refer to as thugs and hoodlums.”

Iran has sought to blame violence on those linked to Iran’s late shah, ousted 40 years ago, and an exile group called the Mujahedeen-e-Khalq. The MEK calls for the overthrow of Iran’s government and has the support of Trump’s personal lawyer, Rudy Giuliani.

President Hassan Rouhani, who pushed for the hike in gas prices as part of a promise to increase payments to Iran’s poor, warned that authorities could track protesters by their license plates. During the unrest, demonstrators abandoned their cars on major highways, blocking traffic.

In a meeting with his Cabinet, Rouhani linked the gas hike to Iran’s inability to export its crude oil abroad, according to a statement on the presidency’s website.

“We have no other choice but to either raise taxes and make payments … or we must export more oil,” he said.

Meanwhile, the official death toll rose to five Monday as the state-run IRNA news agency reported that the violence has resulted in two more deaths in a Tehran suburb. Previously, officials acknowledged the death of a police officer in the city of Kermanshah, one killed in another suburb of Tehran and another in Sirjan, a city some 800 kilometers (500 miles) southeast of the capital.

In Washington, Secretary of State Mike Pompeo said the U.S. was “deeply concerned by reports of several fatalities.”

“The Islamic Republic must cease violence against its own people and should immediately restore the ability of all Iranians to access a free and open Internet,” Pompeo said. “The world is watching.”

The semiofficial Fars news agency, close to the Guard, has put the total number of protesters at over 87,000, saying demonstrators ransacked about 100 banks and stores. Authorities arrested about 1,000 people, Fars reported, citing unnamed security officials for the information.

Iran’s information and communications technology minister, Mohammad Javad Azari Jahromi, told IRNA that officials hope the situation will normalize and allow the internet to be restored.

The protests represent a political risk for Rouhani ahead of February parliamentary elections as the government struggles to keep the economy afloat.

Cheap gasoline is practically considered a birthright in Iran, home to the world’s fourth-largest crude oil reserves despite decades of economic woes since its 1979 Islamic Revolution. Gasoline in the country remains among the cheapest in the world, with the new prices jumping 50% to a minimum of 15,000 rials per liter. That’s 12 cents a liter, or about 50 cents a gallon. A gallon of regular gasoline in the U.S. costs $2.59 by comparison.

The protests come as demonstrations also strike Iraq and Lebanon, two nations key to Iran’s regional influence. Iran’s protests also appear leaderless and spontaneous, making it difficult for them to push for a lasting change in Iran, the Washington Institute for Near-East Policy said in an analysis. It said any traditional leadership likely would find itself targeted by security forces amid their crackdown.

“The demonstrators have no way to present organized demands, much less negotiate them with the authorities,” the institute said early Tuesday. “It is difficult to see how such leaderless protests can produce significant political change.”