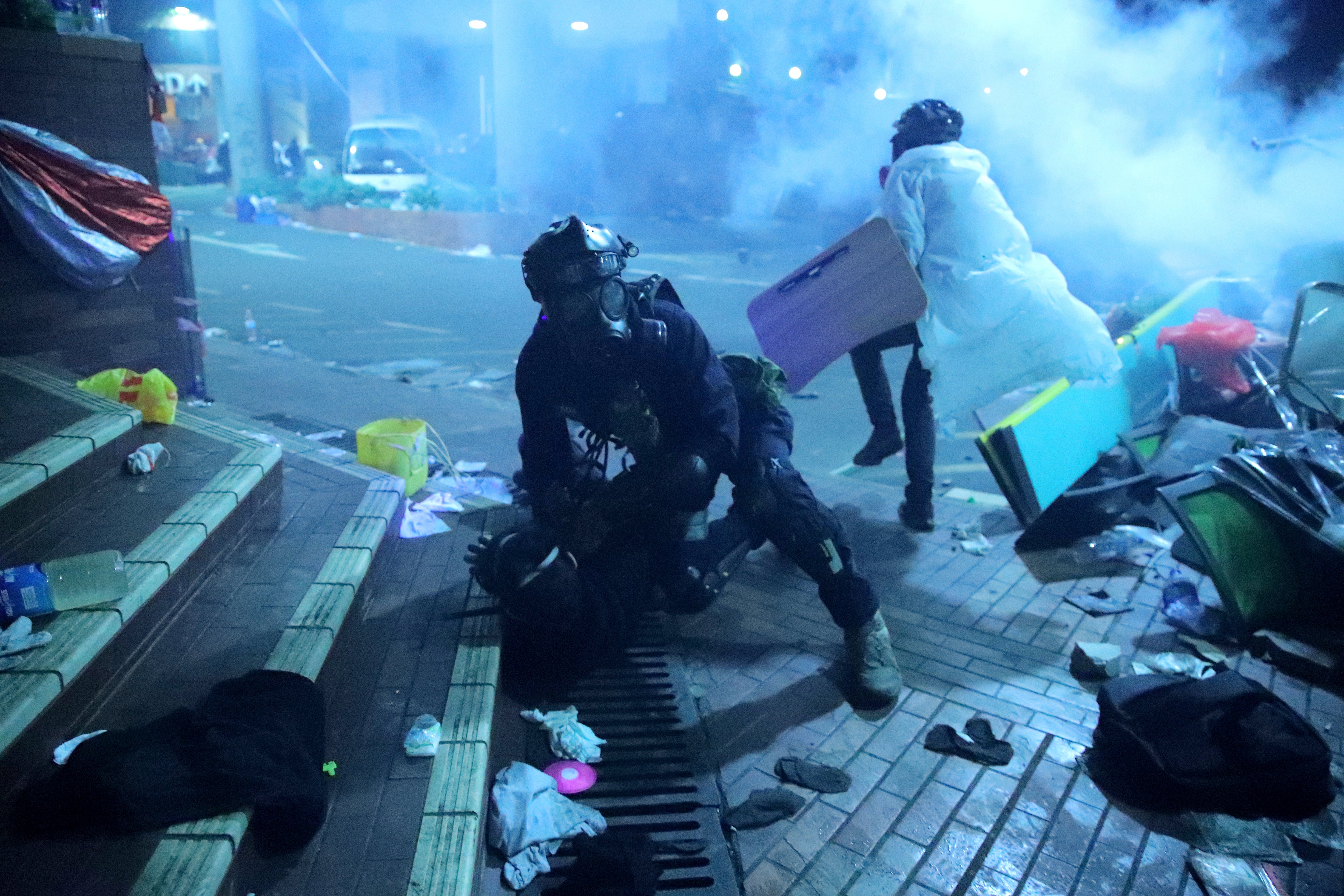 A policeman in riot gear detains a protester outside of Hong Kong Polytechnic University as police storm the campus in Hong Kong, early Monday, Nov. 18, 2019. Fiery explosions were seen early Monday as Hong Kong police stormed into a university held by protesters after an all-night standoff. (AP Photo/Kin Cheung)

Anti-government protesters have barricaded themselves inside Hong Kong Polytechnic University for days. Police surrounded the area Sunday night and began moving in after issuing an ultimatum for people to leave the area. The crowd wore raincoats and carried umbrellas to shield themselves.

Riot officers broke in before dawn as fires raged inside and outside the school, but it was unclear how far the police got. Fiery explosions could be seen as protesters responded with catapult-launched gasoline bombs. Police, who have warned that everyone in the area could be charged with rioting, reportedly made a handful of arrests.

At daybreak, protesters remained in control of most of the campus. In one outdoor area, some demonstrators made gasoline bombs while others dozed with their gas masks on. Two walked about with bows and quivers of arrows, while many stared at their smartphones.

On Sunday, protesters used bows and arrows, and one arrow struck a media liaison officer in the calf. Photos on the department’s Facebook page show the arrow sticking out of the back of the officer’s leg through his pants.

As riot police moved in from all sides, some protesters retreated inside the university. Others set fires on bridges leading to it.

A huge blaze burned along much of a long footbridge that connects a train station to the campus over the approach to the Cross-Harbor Tunnel, a major road under Hong Kong’s harbor that has been blocked by protesters for days.

The use of bows and arrows and gasoline bombs threatened to escalate the violence in the more than five-month anti-government movement. Protesters are trying to keep the pressure on Hong Kong leaders, who have rejected most of their demands.

The protests were sparked by proposed legislation that would have allowed the extradition of criminal suspects to the mainland. Activists saw it as an erosion of Hong Kong’s autonomy under the “one country, two systems” formula implemented in 1997, when Britain returned the territory to China.

The bill has been withdrawn, but the protests have expanded into a wider resistance movement against what is perceived as the growing control of Hong Kong by Communist China, along with calls for full democracy for the territory.

Several hundred people formed a human chain Sunday in central Hong Kong in a peaceful rally in support of the movement.

Azaze Chung, a university student, said the government should respond to the protesters’ demands, not just use force against them.

Police and protesters faced off all day outside Polytechnic after a pitched battle the previous night in which the two sides exchanged tear gas and gasoline bombs that left fires blazing in the street.

A large group of people arrived Sunday morning to try to clean up the road but were warned away by protesters. Riot police shot several volleys of tear gas at the protesters, who sheltered behind a wall of umbrellas and threw gasoline bombs into nearby bushes and trees, setting them on fire.

The protesters held their ground for most of the day, as water cannon trucks drove over bricks and nails strewn by protesters to spray them at close range — some with water dyed blue to help police identify protesters afterward.

Protesters began retreating into the university near sunset, fearing they would be trapped as police approached from other directions. The protesters barricaded the entrances to the campus and set up narrow access control points.

They are the holdouts from larger groups that occupied several major campuses for much of last week.

Another group threw bricks in the street to block a main thoroughfare in the Mongkok district, as police fired tear gas to try to disperse them. The disruption to Nathan Road traffic may have been an attempt to distract police during the standoff at Polytechnic.

Opposition lawmakers criticized the Chinese military for joining a cleanup to remove debris from streets near Hong Kong Baptist University on Saturday.

Dozens of Chinese troops, dressed in black shorts and olive drab T-shirts, ran out in loose formation and picked up paving stones, rocks and other obstacles that had cluttered the street.

The military is allowed to help maintain public order, but only at the request of the Hong Kong government. The government said that it had not requested the military’s assistance, describing it as a voluntary community activity.

The Education Bureau announced that classes from kindergarten to high school would be suspended again on Monday because of safety concerns. Classes have been canceled since Thursday, after the bureau came under criticism for not doing so earlier.