Pope Francis: ‘Greed of a few’ worsens poverty of others 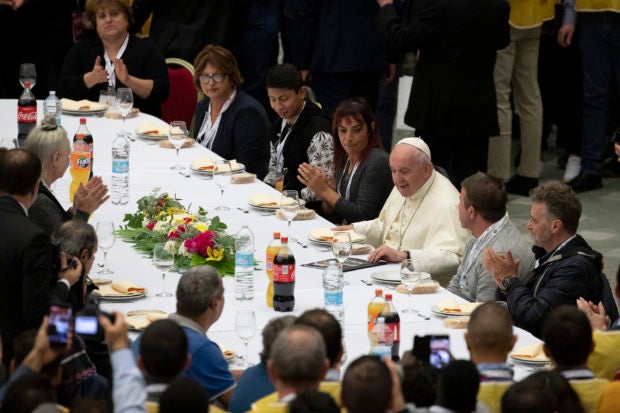 Pope Francis sits at a table during lunch in the Paul VI Hall at the Vatican on Sunday, November 17, 2019. Pope Francis is offering several hundred poor people, homeless, migrants, unemployed a lunch on Sunday as he celebrates the World Day of the Poor with a concrete gesture of charity in the spirit of his namesake, St. Francis of Assisi. (AP Photo/Alessandra Tarantino)

VATICAN CITY — Pope Francis on Sunday decried that the “greed of a few” wealthy people is compounding the plight of the poor and lamented the lack of concern about growing income gaps between the haves and have-nots.

“We go our way in haste, without worrying that gaps are increasing, that the greed of a few is adding to the poverty of many others,’’ Pope Francis said in his homily, with poor people among the people accorded seats in the basilica for the Mass.

Keeping a tradition of his papacy, Pope Francis invited indigent persons to dine with him at the Vatican after Mass. Addressing the public in St. Peter’s Square following the end of the service, the Pope said such initiatives pay witness to “the attention that must never be lacking toward these brothers and sisters of ours.”

He expressed dismay over the ‘’indifference of society toward poor people.”

Like the saint who inspired his choice of name, Francis of Assisi, the Pope has made paying attention to those living on society’s margins a priority of his work.

That focus can appear jarring to some prelates in a church that invests in multi-million dollar real estate, possesses priceless artworks, and conducts its liturgical services often amid splendor, such as in the magnificence of St. Peter’s, other basilicas, and cathedrals.

Pope Francis’ emphasis on mercy and charity has also raised the hackles of a small, but noisy faction among the more conservative ranks of bishops and cardinals, who would rather the head of the Catholic church concentrate more on dogma than on persons.

Some 150 tables were set up in a Vatican hall where Pope Francis usually holds weekly indoor audiences with the public. Another 1,500 needy will be treated to a separate lunch elsewhere in Rome, while parishes throughout Italy were similarly setting out lunch for those unable to afford their own.

Rather than be shunned, the Pope told the faithful, that the poor should be seen as treasures.

“Instead of feeling annoyed when they knock on our doors, let us welcome their cry for help as a summons to go out of ourselves,“ Pope Francis said.

“For the poor reveal to us the riches that never grow old, that unite heaven and earth, the riches for which life is truly worth living: the riches of love,’’ he concluded in his homily.

Pope Francis also said the faithful should ask themselves: “Do I, as a Christian, have at least one poor person as a friend?”

He singled out the work of doctors and nurses who have tended to the medical needs of the homeless and poor at special clinics set up in St. Peter’s Square. Among the prelates at Mass was a Polish monsignor he raised to cardinal’s rank to highlight his tireless work with the poor, including distributing sleeping bags and hot meals to those living on the streets.