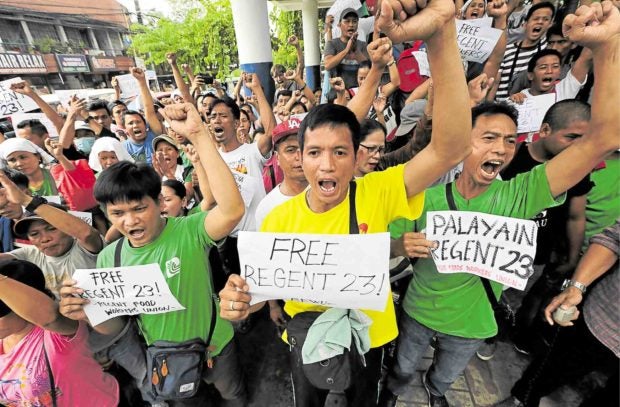 Pasig City Mayor Vico Sotto pressured Regent Foods Corp. (RFC) on Sunday to drop charges it had filed against striking workers, vowing to “do everything within my power” to ensure a speedy release for 11 who remained in detention.

In a Facebook post—notable for its searing public rebuke of a corporation headquartered in his city—the mayor chided RFC for what he deemed was its abuse of power and gave a passionate defense of the workers who were “fighting for what they believe to be just.”

“These people are not criminals; they do not have the goal of hurting you,” Sotto said. “You can continue with the labor dispute without sending the poor and powerless to jail. I condemn the misuse of your privileged position to suppress the rights of your protesting workers.”

He himself acknowledged the unprecedented nature of involving himself in the dispute, which would be decided by the Department of Labor and Employment, but said he could not “sit around and do nothing” while his constituents were “being deprived of liberty as they fight for their rights.”

Sotto closed his statement with a warning aimed at RFC: “If you want to have a healthy relationship with our city, I highly suggest you rethink your position.”

On Nov. 9, a group of private guards and policemen broke up the picket line at the RFC compound in Pasig City in a violent dispersal that ended with 23 being arrested—20 striking workers, two members of labor group Defend Job Philippines, and a tricycle driver who was just a bystander.

Cases of slight physical injuries, resistance and disobedience on top of alarm and scandal were filed by the private security firm against the 23, and Sotto said on Sunday that the RFC management had admitted to being behind the complaints.

“As the local chief executive of Pasig, we believe that Mayor Sotto’s open statement of support [for] the striking and protesting workers of RFC is instrumental and beneficial in proving the justness of the aired grievances of the labor unions,” Defend Job said in a statement on Sunday.

It called on Sotto to help the workers return to the company as regular employees, aid them in their court cases and prosecute those involved in the “illegal, violent and overkill dispersal.”

“It is them that must be held accountable over their long list of abuses against their workers, including decadeslong contractualization, low wages, unpaid benefits, unfair labor practices, violation [of] their rights to union and strike [and] runaway shop attempts,” it added.

Sotto said he had met with both sides and eventually asked RFC to withdraw the charges against the workers, with RFC officials Irwin and Susan See asking that they be given time to consult their board.

The mayor ratcheted up the pressure with his public statement after a lawyer informed him that RFC would not withdraw the charges and instead “trust the judicial process” which, according to Sotto, was “easy to say as multimillionaires who will eat 3x a day no matter what happens here.”

“[Meanwhile,] the people they have sued have recently lost their main source of income and are now even torn away from their families,” he said.

Asserting that it was now incumbent to help the 23 “regain/maintain their liberty,” Sotto pledged to personally make sure the 11 detained workers would be out on bail by Monday. The other 12 have already posted bail.

The workers have been on strike since Oct. 16 in response to alleged physical and verbal abuse, failure to implement the union-negotiated collective bargaining agreement and contractualization schemes employed by the company.

The Inquirer tried to get RFC’s side through phone calls and email but at press time, it had yet to respond.