Hip waders on: Venice braces for another exceptional tide

VENICE, Italy — Venetians braced Sunday for the prospect of another exceptional tide in a season that is setting records.

City officials shut down St. Mark’s Square, removing elevated walkways and turning back curious onlookers. Tourists with scheduled departures rushed to grab the last water taxis to get to the mainland on Sunday before service was interrupted in anticipation of the high tide.

Officials are forecasting a 1.6-meter (5 foot, 2 inches) surge of water on Sunday through the lagoon city. That comes after Tuesday’s 1.87-meter flood, the worst in 53 years, followed by a high tide of 1.54 meters on Friday. 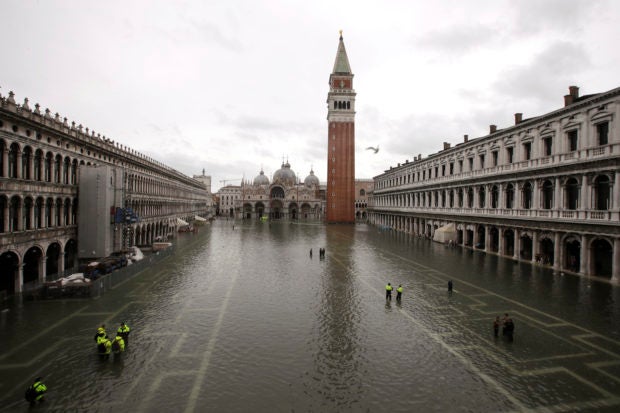 An overview of an empty St.Mark square from the Correr Museum, in Venice, Italy, Sunday, Nov. 17, 2019. Venetians are bracing for the prospect of another exceptional tide in a season that is setting new records. Officials are forecasting a 1.6 meter (5 feet, 2 inches) surge of water Sunday through the lagoon city. (AP Photo/Luca Bruno)

Those two events mark the first time since records began in 1872 that two floods topped 1.5 meters in the same year. Sunday could see the record-breaking prospect of three tides over that mark in just one week alone.

The city’s mayor has put the flooding damage at hundreds of millions of euros and Italian officials have declared a state of emergency for the area.

But tourists continued to arrive, despite the prospects of another day of surging water. Knee-high boots became too short to keep dry and some people who didn’t have fisherman’s hip waders resorted to tying plastic garbage bags high up on their legs.

Luca D’Acunto and his girlfriend Giovanna Maglietta surveyed the rising water from a bridge, wondering how to make their way to their nearby hotel. They both wore colorful disposable rubber boots, but they came up only up to their knees.

“We made the reservation this week before the floods and had paid already, so we came,” said D’Acunto, a 28-year-old from Naples. “Instead of a romantic trip, we’ll have an adventurous one.” 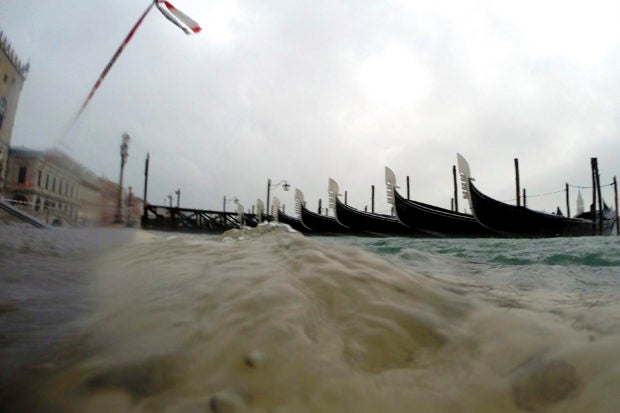 Gondolas dance in the rising tide in Venice, Italy, Sunday, Nov. 17, 2019. Venetians are bracing for the prospect of another exceptional tide in a season that is setting new records. Officials are forecasting a 1.6 meter (5 feet, 2 inches) surge Sunday. That comes after Tuesday’s 1.87-meter flood, the worst in 53 years, followed by a high tide of 1.54 meters on Friday. (AP Photo/Luca Bruno)

As the tide nudged up to above 1.32 meters (4 feet, 4 inches), the doors on St. Mark’s Basilica, which has been damaged by the relentless flooding, remained securely shut. The Venetian newspaper, Il Gazzettino, reported that sandbags had been placed in the windows of the crypt to prevent water from flooding in again.

Most museums were closed as a precaution, but the Correr Museum, which overlooks St. Mark’s Square and explores the art and history of Venice, remained open. Tourists enjoyed a Venetian Spritz – a colorful aperitif with an Italian bitter and Prosecco – as the waters rose.

Officials said 280 civil protection volunteers from throughout the region were deployed in the city to assist as needed.

Young Venetian volunteers wearing rubber boots have also shown up at key sites, including the city’s Music Conservatory, to help save precious manuscripts from the invading saltwater.

The flooding has raised renewed debates about the city’s Moses flood defense project, a corruption-riddled underwater barrier system that is still not operational after more than 16 years of construction and at least 5 billion euros of public funding. It was supposed to be working by 2011.